On January 1, 2021, in an unusual New Year’s Day session, the Senate (following similar action by the House) overrode President Trump’s veto and enacted into law the National Defense Authorization Act (NDAA) (H.R. 6395). In addition to the provisions relating to the Department of Defense, the bill contains numerous maritime sections, including Authorization Acts for the Coast Guard (USCG), the Maritime Administration (MARAD), and the Federal Maritime Commission (FMC).

The Coast Guard is directed to not enforce the requirement for merchant mariner documents with respect to ‘non-operating individuals’ including those engaged on board for the sole purpose of carrying out spill response activities, salvage, marine firefighting, or commercial diving business or functions from or on any vessel, including marine firefighters, spill response personnel, salvage personnel, and commercial divers and diving support personnel. This resolves a continuing problem of how to legally accommodate these important persons who are not traditional mariners but whose temporary presence onboard is vital.

In order to eliminate the backlog in processing of vessel certificates of documentation, the Coast Guard is authorized to extend the duration of such certificates for a period of not more than one year.

Large passenger vessels that embark or disembark passengers in the United States are required to have a physician on board to treat passengers; be in compliance with the Health Care Guidelines for Cruise Ship Medical Facilities established by the American College of Emergency Physicians; and ensure that the initial safety briefing given to the passengers on board the vessel includes (A) the location of the vessel’s medical facilities; and (B) the appropriate steps passengers should follow during a medical emergency.

The Coast Guard is directed to establish a two-year pilot program for the establishment and enforcement of safety zones in the exclusive economic zone (EEZ) for special activities, such as space activities and offshore energy development. While enforcement actions regarding US vessels and US nationals will not present problems, there may be issues regarding enforcement actions regarding foreign vessels and foreign persons, as international law imposes limits on the authority of a coastal state beyond its territorial sea.

The Coast Guard is directed to establish a national policy for vessel traffic services (VTS), including the standardization of titles, roles, and responsibilities of VTS personnel and organizational structure; the establishment of measures for monitoring, informing, recommending, and directing vessel traffic; standardization of training for VTS personnel; and the establishment of certification and competency evaluation for VTS personnel. A continuous risk assessment program is to be developed to evaluate and mitigate safety risks for each VTS area. A nationwide VTS personnel training program and a standard competency qualification process for VTS personnel is to be applied. In sum, the US VTS program is to standardized and professionalized.

Towing vessels operating as harbor assist vessels and response vessels included on a vessel response plan (VRP) are exempt from any additional requirements of subtitle II of title 46, United States Code, and chapter I of title 33 and chapter I of title 46, Code of Federal Regulations (as in effect on the date of the enactment of this Act), that would result solely from such vessel operating outside the Boundary Line for the above operations. This provision eliminates the conundrum created when towing vessels became subject to inspection.

It is the sense of Congress that the Arctic is a region of strategic importance to the national security interests of the United States, and the Coast Guard must better align its mission prioritization and development of capabilities to meet the growing array of challenges in the region; and that the increasing freedom of navigation and expansion of activity in the Arctic must be met with an increasing show of Coast Guard forces capable of exerting influence through persistent presence. Reports to Congress are required concerning the Arctic capabilities of the US armed forces and on the Arctic search and rescue capabilities of the Coast Guard. The Arctic Shipping Federal Advisory Committee is established to provide policy recommendations to the Secretary of Transportation on positioning the United States to take advantage of emerging opportunities for Arctic maritime transportation.

Largely implementing the recommendations of the National Transportation Safety Board’s investigation of the fatal Conception casualty, the vessel inspection laws have been amended to increase requirements for covered small passenger vessels with overnight passenger accommodations.

Maritime Administration
The Maritime Administration Authorization Act includes a provision amending the processes for waiving navigation and vessel inspection laws. Waivers requested by the Secretary of Defense must be necessary in the interest of national defense to address an immediate adverse effect on military operations and a written explanation must be provided to Congress within 24 hours. Reports concerning all other waivers must be posted on the internet. The Act also establishes a Maritime Transportation System Emergency Relief Program as well as a Tanker Security Fleet Program.

Federal Maritime Commission
The Federal Maritime Commission Authorization Act requires the FMC to annually submit to Congress reports that describe the Commission’s progress toward addressing the issues raised in each unfinished regulatory proceeding, regardless of whether the proceeding is subject to a statutory or regulatory deadline. It also establishes the National Shipper Advisory Committee to advise the Commission on policies relating to the competitiveness, reliability, integrity, and fairness of the international ocean freight delivery system.

Miscellaneous
In a wholly separate portion of NDAA, Congress amended the Outer Continental Shelf Lands Act to make it clear that the jurisdiction of the United States extends to installations and other devices permanently or temporarily attached to the OCS seabed erected thereon for the purpose of exploring for, developing, or producing resources, including non-mineral energy resources. This provision makes it clear that the coastwise trade laws apply to offshore wind and solar energy facilities.

The maritime portions of NDAA cover pages and pages of the legislation. Space limitations prevent a discussion here of all those provisions or even a thorough analysis of the few highlighted here. Those interested should review the legislation in depth. 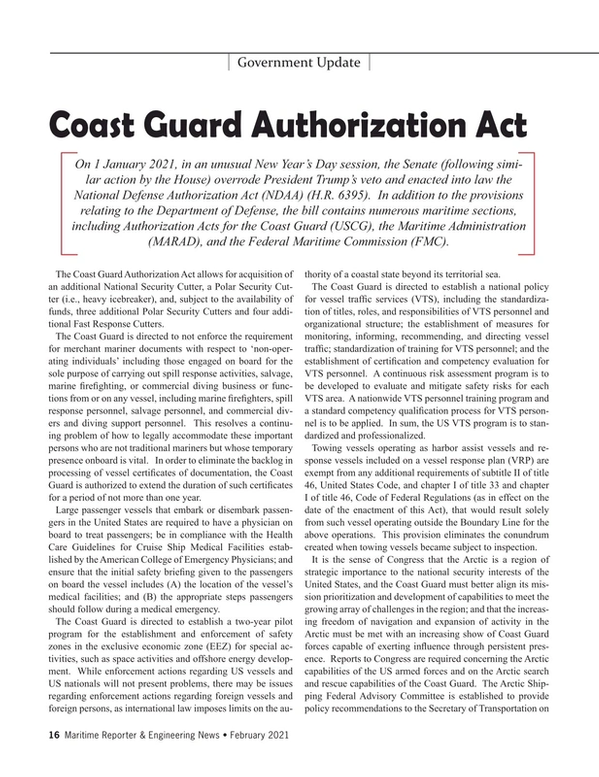 Other stories from February 2021 issue