Since its founding in 2001, Denmark-headquartered security information specialist Risk Intelligence has developed a fully integrated risk assessment and planning tool that provides valid, actionable intelligence to any fleet, on land, in port or at sea, 24/7/365. The company has three information and intelligence products that together assess security risks at sea, in ports and on land to serve the needs of stakeholders in the transportation of goods by sea from point of production to point of sale:

• MaRisk, introduced in 2008, provides 24/7 maritime incident updates and security alerts as well as statistics, recommendations and guidance plus satellite fleet tracking to evaluate areas of risk at sea;

• Since 2015, PortRisk has been reporting 24/7 on port incidents when relevant and providing port data with IMO code, ISPS level etc. As well as security risks in port, PortRisk provides vulnerability and threat assessments, including city threat assessments and guidance for crew changes, as well as port security and emergency information;

• And the company’s latest product, LandRisk, introduced last year after Risk Intelligence’s 2018 IPO, is an end-to-end supply chain security solution designed to improve visibility and awareness of disruptions, customize the user’s risk profile and enhance the resilience of their supply chain, and optimize sourcing and logistics. In support of this, Risk Intelligence recently signed an agreement with the Transport Asset Protection Association (TAPA) to raise the visibility of cargo theft incidents by incorporating a vast number of TAPA’s recorded theft incidents into its Risk Intelligence System.

So how does Risk Intelligence accomplish this?

The company has an international Duty Watch Team updating the Risk Intelligence System 24/7/365 with intelligence gathering, verification and initial analysis and assessment for alerts and incident reports. The Duty Watch Team operates on a shift basis to give literally full-time coverage: after 8 hours of operation in Denmark, the watch passes to the North America office; after the next 8 hours, Singapore takes over.

Risk Intelligence has a broad range of maritime transportation stakeholders amongst its clients: the company’s shipping clients operate more than 7,900 vessels or 14.7 percent of the 53,800 world merchant fleet vessels engaged in international trade, while its oil & gas clients include all the Western oil majors. Insurance clients include such major companies as Norwegian War Risk (DNK) and Norwegian Hull Club. Its Government clients include eight NATO countries.

But data and intelligence are of little value unless analyzed. Risk Intelligence’s analysts gather intelligence, information and data to produce intelligence threat and risk analysis through verification, analysis and assessment. The Risk Intelligence System includes threat assessments on all relevant countries, sea areas, ports and cities as well as LandRisk areas and zones, while in addition other assessments are made for the company’s weekly and monthly reports as well as bespoke threat and risk assessments for its clients. About 10-15 percent of all ports and offshore terminals on PortRisk are assessed through onsite port surveys: recent examples include reports on the security statuses of Mogadishu, Lagos, Port Harcourt, and Douala.

Voyage Risk Assessment Reports are another of the services the company provides: two recent examples include a survey of maritime security incidents in West Africa, ‘Gulf of Guinea 2007-2018’; and several publications assessing the ever-changing security situation in the Persian Gulf and Iran, including a decision brief produced in June 2018, ‘Tanker transits through the Persian Gulf’; a July 2019 Whitepaper, ‘Shipping operations in the Persian Gulf’; and ‘Briefing Paper on Possible Iranian Retaliation’, produced after the killing by the US of General Qassem Soleimani of Iran’s Revolutionary Guard Corps on January 3 this year but before Iran had taken any retaliatory action. 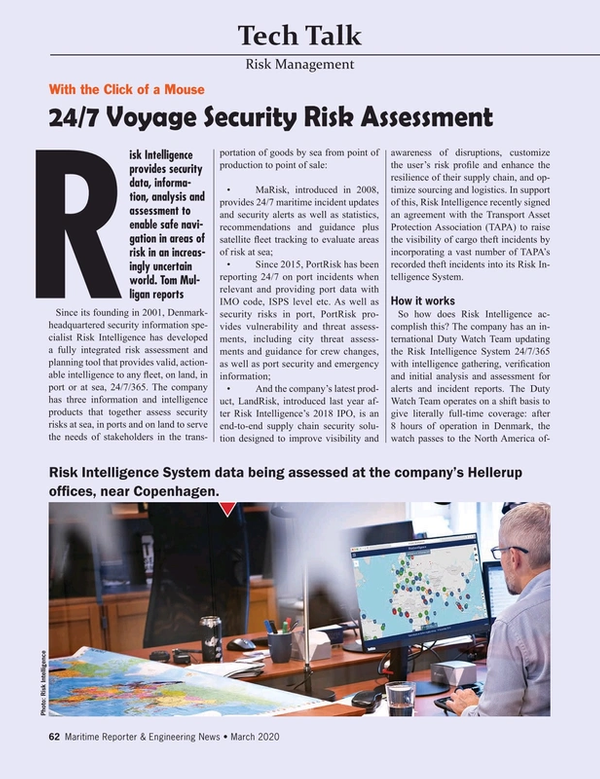 Read 24/7 Voyage Security Risk Assessment … at the click of a mouse in Pdf, Flash or Html5 edition of March 2020 Maritime Reporter

Other stories from March 2020 issue