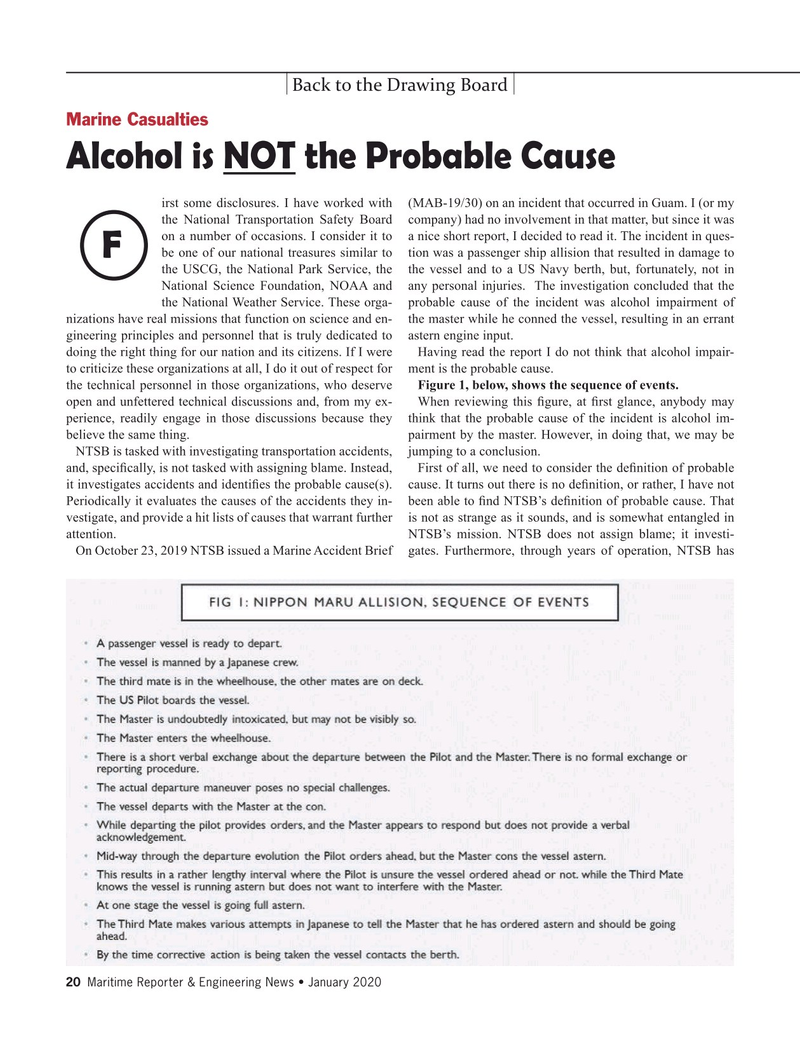 Back to the Drawing Board

Alcohol is NOT the Probable Cause irst some disclosures. I have worked with (MAB-19/30) on an incident that occurred in Guam. I (or my the National Transportation Safety Board company) had no involvement in that matter, but since it was on a number of occasions. I consider it to a nice short report, I decided to read it. The incident in ques- be one of our national treasures similar to tion was a passenger ship allision that resulted in damage to

F the USCG, the National Park Service, the the vessel and to a US Navy berth, but, fortunately, not in

National Science Foundation, NOAA and any personal injuries. The investigation concluded that the the National Weather Service. These orga- probable cause of the incident was alcohol impairment of nizations have real missions that function on science and en- the master while he conned the vessel, resulting in an errant gineering principles and personnel that is truly dedicated to astern engine input. doing the right thing for our nation and its citizens. If I were Having read the report I do not think that alcohol impair- to criticize these organizations at all, I do it out of respect for ment is the probable cause. the technical personnel in those organizations, who deserve Figure 1, below, shows the sequence of events.

open and unfettered technical discussions and, from my ex- When reviewing this ? gure, at ? rst glance, anybody may perience, readily engage in those discussions because they think that the probable cause of the incident is alcohol im- believe the same thing. pairment by the master. However, in doing that, we may be

NTSB is tasked with investigating transportation accidents, jumping to a conclusion.

and, speci? cally, is not tasked with assigning blame. Instead, First of all, we need to consider the de? nition of probable it investigates accidents and identi? es the probable cause(s). cause. It turns out there is no de? nition, or rather, I have not

Periodically it evaluates the causes of the accidents they in- been able to ? nd NTSB’s de? nition of probable cause. That vestigate, and provide a hit lists of causes that warrant further is not as strange as it sounds, and is somewhat entangled in attention. NTSB’s mission. NTSB does not assign blame; it investi-