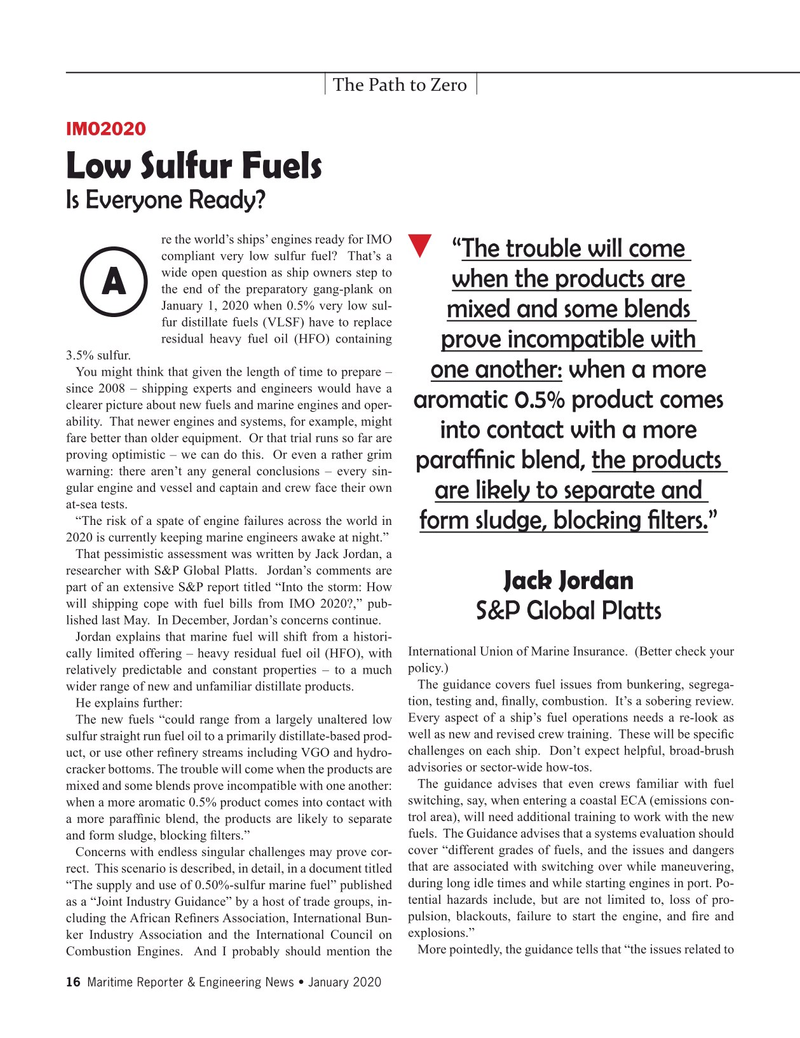 The Path to Zero

re the world’s ships’ engines ready for IMO “The trouble will come compliant very low sulfur fuel? That’s a wide open question as ship owners step to when the products are the end of the preparatory gang-plank on

You might think that given the length of time to prepare – one another: when a more since 2008 – shipping experts and engineers would have a aromatic 0.5% product comes clearer picture about new fuels and marine engines and oper- ability. That newer engines and systems, for example, might into contact with a more fare better than older equipment. Or that trial runs so far are proving optimistic – we can do this. Or even a rather grim paraf? nic blend, the products warning: there aren’t any general conclusions – every sin- gular engine and vessel and captain and crew face their own are likely to separate and at-sea tests.

“The risk of a spate of engine failures across the world in form sludge, blocking ? lters.” 2020 is currently keeping marine engineers awake at night.”

That pessimistic assessment was written by Jack Jordan, a researcher with S&P Global Platts. Jordan’s comments are

Jack Jordan part of an extensive S&P report titled “Into the storm: How will shipping cope with fuel bills from IMO 2020?,” pub-

Jordan explains that marine fuel will shift from a histori- cally limited offering – heavy residual fuel oil (HFO), with International Union of Marine Insurance. (Better check your relatively predictable and constant properties – to a much policy.)

The new fuels “could range from a largely unaltered low Every aspect of a ship’s fuel operations needs a re-look as well as new and revised crew training. These will be speci? c sulfur straight run fuel oil to a primarily distillate-based prod- challenges on each ship. Don’t expect helpful, broad-brush uct, or use other re? nery streams including VGO and hydro- advisories or sector-wide how-tos.

cracker bottoms. The trouble will come when the products are

The guidance advises that even crews familiar with fuel mixed and some blends prove incompatible with one another: when a more aromatic 0.5% product comes into contact with switching, say, when entering a coastal ECA (emissions con- a more paraf? nic blend, the products are likely to separate trol area), will need additional training to work with the new fuels. The Guidance advises that a systems evaluation should and form sludge, blocking ? lters.” cover “different grades of fuels, and the issues and dangers

Concerns with endless singular challenges may prove cor- rect. This scenario is described, in detail, in a document titled that are associated with switching over while maneuvering, “The supply and use of 0.50%-sulfur marine fuel” published during long idle times and while starting engines in port. Po- tential hazards include, but are not limited to, loss of pro- as a “Joint Industry Guidance” by a host of trade groups, in- pulsion, blackouts, failure to start the engine, and ? re and cluding the African Re? ners Association, International Bun- ker Industry Association and the International Council on explosions.”

More pointedly, the guidance tells that “the issues related to

Combustion Engines. And I probably should mention the 16 Maritime Reporter & Engineering News • January 2020