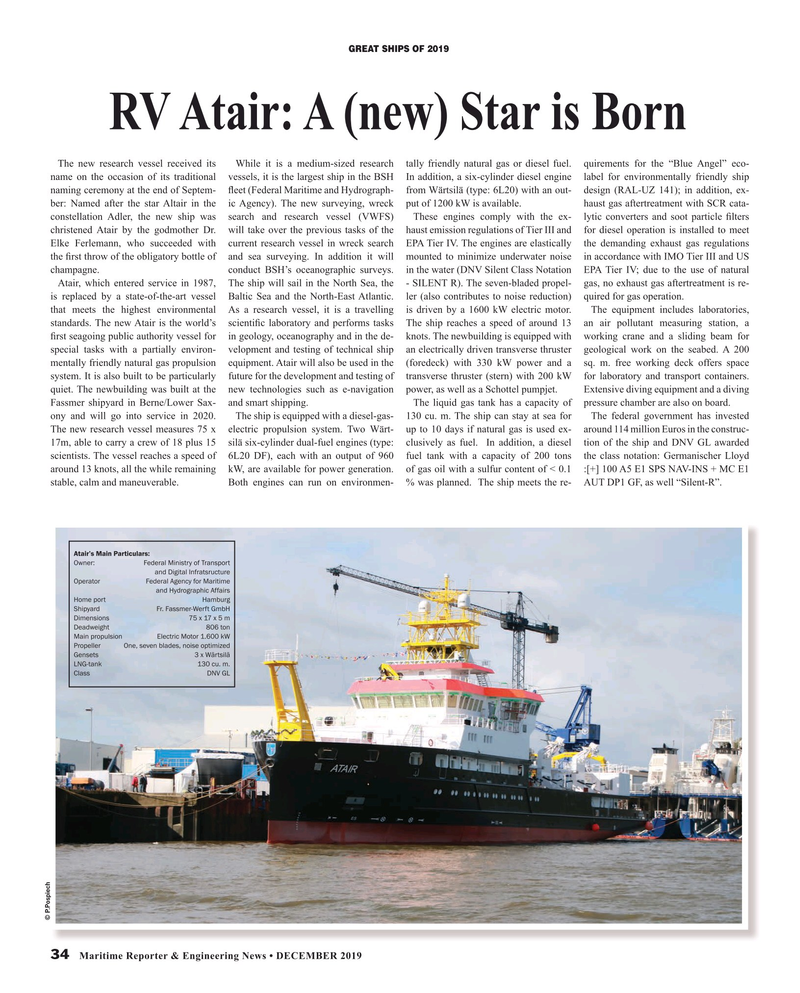 The new research vessel received its While it is a medium-sized research tally friendly natural gas or diesel fuel. quirements for the “Blue Angel” eco- name on the occasion of its traditional vessels, it is the largest ship in the BSH In addition, a six-cylinder diesel engine label for environmentally friendly ship naming ceremony at the end of Septem- ? eet (Federal Maritime and Hydrograph- from Wärtsilä (type: 6L20) with an out- design (RAL-UZ 141); in addition, ex- ber: Named after the star Altair in the ic Agency). The new surveying, wreck put of 1200 kW is available. haust gas aftertreatment with SCR cata- constellation Adler, the new ship was search and research vessel (VWFS) These engines comply with the ex- lytic converters and soot particle ? lters christened Atair by the godmother Dr. will take over the previous tasks of the haust emission regulations of Tier III and for diesel operation is installed to meet

Elke Ferlemann, who succeeded with current research vessel in wreck search EPA Tier IV. The engines are elastically the demanding exhaust gas regulations the ? rst throw of the obligatory bottle of and sea surveying. In addition it will mounted to minimize underwater noise in accordance with IMO Tier III and US champagne. conduct BSH’s oceanographic surveys. in the water (DNV Silent Class Notation EPA Tier IV; due to the use of natural

Atair, which entered service in 1987, The ship will sail in the North Sea, the - SILENT R). The seven-bladed propel- gas, no exhaust gas aftertreatment is re- is replaced by a state-of-the-art vessel Baltic Sea and the North-East Atlantic. ler (also contributes to noise reduction) quired for gas operation. that meets the highest environmental As a research vessel, it is a travelling is driven by a 1600 kW electric motor. The equipment includes laboratories, standards. The new Atair is the world’s scienti? c laboratory and performs tasks The ship reaches a speed of around 13 an air pollutant measuring station, a ? rst seagoing public authority vessel for in geology, oceanography and in the de- knots. The newbuilding is equipped with working crane and a sliding beam for special tasks with a partially environ- velopment and testing of technical ship an electrically driven transverse thruster geological work on the seabed. A 200 mentally friendly natural gas propulsion equipment. Atair will also be used in the (foredeck) with 330 kW power and a sq. m. free working deck offers space system. It is also built to be particularly future for the development and testing of transverse thruster (stern) with 200 kW for laboratory and transport containers. quiet. The newbuilding was built at the new technologies such as e-navigation power, as well as a Schottel pumpjet. Extensive diving equipment and a diving

Fassmer shipyard in Berne/Lower Sax- and smart shipping. The liquid gas tank has a capacity of pressure chamber are also on board.

ony and will go into service in 2020. The ship is equipped with a diesel-gas- 130 cu. m. The ship can stay at sea for The federal government has invested

The new research vessel measures 75 x electric propulsion system. Two Wärt- up to 10 days if natural gas is used ex- around 114 million Euros in the construc- 17m, able to carry a crew of 18 plus 15 silä six-cylinder dual-fuel engines (type: clusively as fuel. In addition, a diesel tion of the ship and DNV GL awarded scientists. The vessel reaches a speed of 6L20 DF), each with an output of 960 fuel tank with a capacity of 200 tons the class notation: Germanischer Lloyd around 13 knots, all the while remaining kW, are available for power generation. of gas oil with a sulfur content of < 0.1 :[+] 100 A5 E1 SPS NAV-INS + MC E1 stable, calm and maneuverable. Both engines can run on environmen- % was planned. The ship meets the re- AUT DP1 GF, as well “Silent-R”.