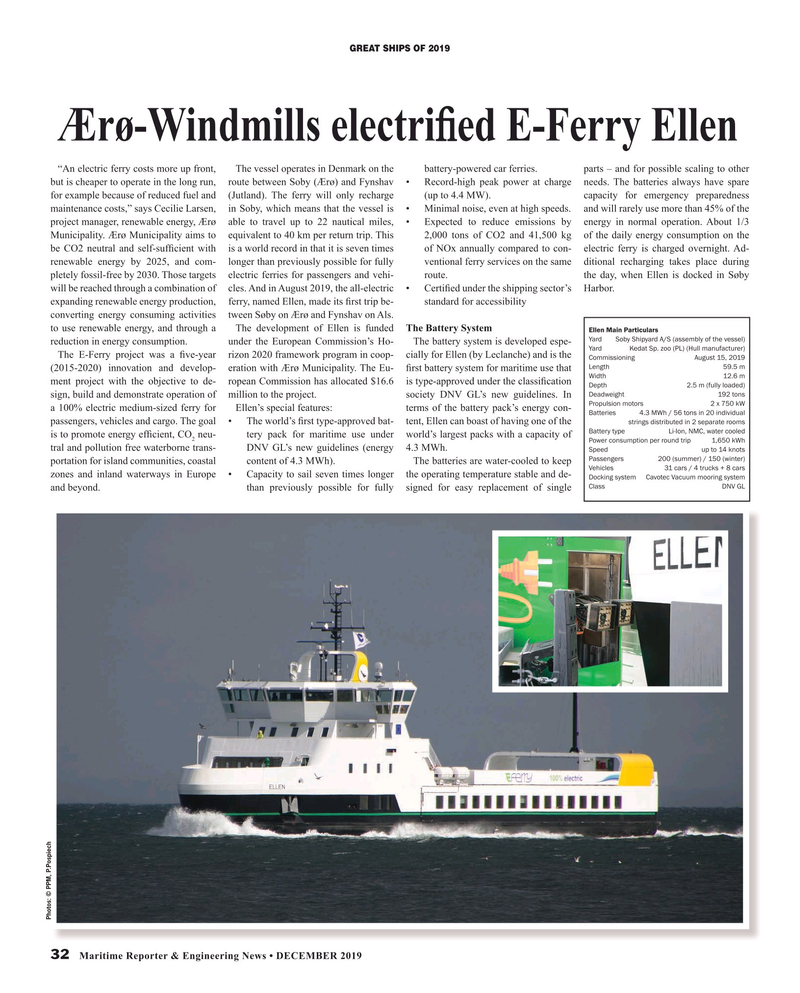 Ærø-Windmills electri? ed E-Ferry Ellen “An electric ferry costs more up front, The vessel operates in Denmark on the battery-powered car ferries. parts – and for possible scaling to other but is cheaper to operate in the long run, route between Soby (Ærø) and Fynshav • Record-high peak power at charge needs. The batteries always have spare for example because of reduced fuel and (Jutland). The ferry will only recharge (up to 4.4 MW). capacity for emergency preparedness maintenance costs,” says Cecilie Larsen, in Soby, which means that the vessel is • Minimal noise, even at high speeds. and will rarely use more than 45% of the project manager, renewable energy, Ærø able to travel up to 22 nautical miles, • Expected to reduce emissions by energy in normal operation. About 1/3

Municipality. Ærø Municipality aims to equivalent to 40 km per return trip. This 2,000 tons of CO2 and 41,500 kg of the daily energy consumption on the be CO2 neutral and self-suf? cient with is a world record in that it is seven times of NOx annually compared to con- electric ferry is charged overnight. Ad- renewable energy by 2025, and com- longer than previously possible for fully ventional ferry services on the same ditional recharging takes place during pletely fossil-free by 2030. Those targets electric ferries for passengers and vehi- route. the day, when Ellen is docked in Søby will be reached through a combination of cles. And in August 2019, the all-electric • Certi? ed under the shipping sector’s Harbor.

to use renewable energy, and through a The development of Ellen is funded The Battery System

Yard Soby Shipyard A/S (assembly of the vessel) reduction in energy consumption. under the European Commission’s Ho- The battery system is developed espe-

The E-Ferry project was a ? ve-year rizon 2020 framework program in coop- cially for Ellen (by Leclanche) and is the

Width 12.6 m ment project with the objective to de- ropean Commission has allocated $16.6 is type-approved under the classi? cation

Batteries 4.3 MWh / 56 tons in 20 individual passengers, vehicles and cargo. The goal • The world’s ? rst type-approved bat- tent, Ellen can boast of having one of the strings distributed in 2 separate rooms

Speed up to 14 knots

Class DNV GL and beyond. than previously possible for fully signed for easy replacement of single