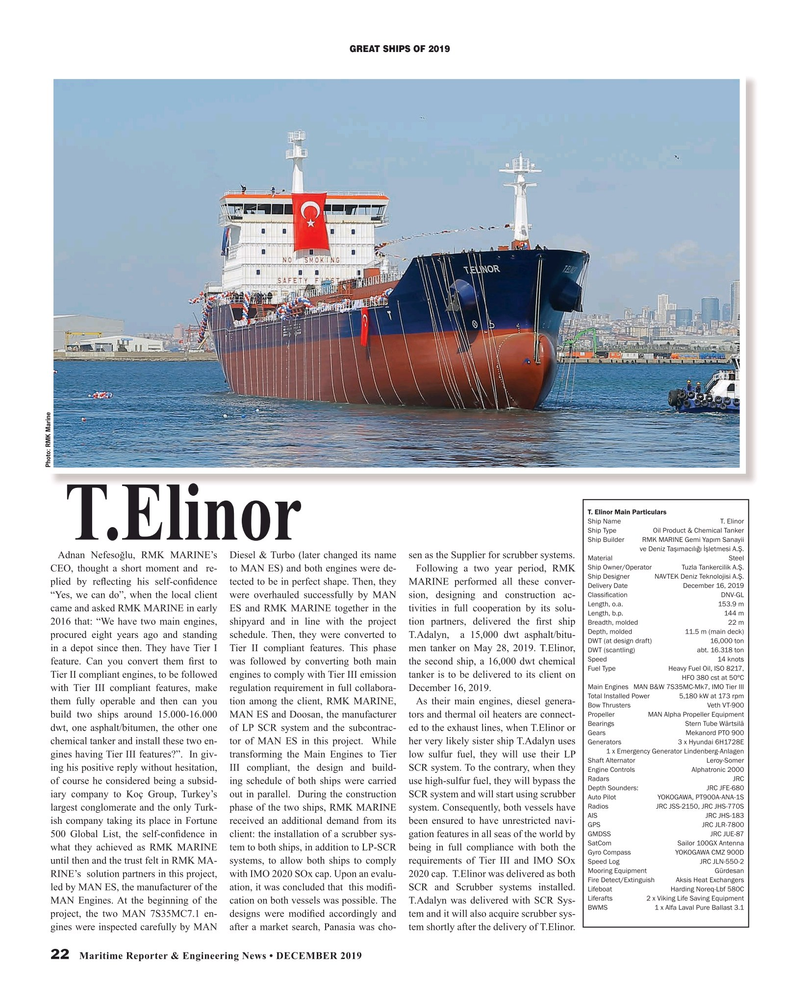 CEO, thought a short moment and re- to MAN ES) and both engines were de- Following a two year period, RMK

plied by re? ecting his self-con? dence tected to be in perfect shape. Then, they MARINE performed all these conver-

Classi? cation DNV-GL “Yes, we can do”, when the local client were overhauled successfully by MAN sion, designing and construction ac-

Length, o.a. 153.9 m came and asked RMK MARINE in early ES and RMK MARINE together in the tivities in full cooperation by its solu-

Length, b.p. 144 m 2016 that: “We have two main engines, shipyard and in line with the project tion partners, delivered the ? rst ship

Depth, molded 11.5 m (main deck) procured eight years ago and standing schedule. Then, they were converted to T.Adalyn, a 15,000 dwt asphalt/bitu-

Speed 14 knots feature. Can you convert them ? rst to was followed by converting both main the second ship, a 16,000 dwt chemical

Tier II compliant engines, to be followed engines to comply with Tier III emission tanker is to be delivered to its client on HFO 380 cst at 50ºC

Total Installed Power 5,180 kW at 173 rpm them fully operable and then can you tion among the client, RMK MARINE, As their main engines, diesel genera-

Bearings Stern Tube Wärtsilä dwt, one asphalt/bitumen, the other one of LP SCR system and the subcontrac- ed to the exhaust lines, when T.Elinor or

Shaft Alternator Leroy-Somer ing his positive reply without hesitation, III compliant, the design and build- SCR system. To the contrary, when they

Radars JRC of course he considered being a subsid- ing schedule of both ships were carried use high-sulfur fuel, they will bypass the

Depth Sounders: JRC JFE-680 iary company to Koç Group, Turkey’s out in parallel. During the construction SCR system and will start using scrubber

Radios JRC JSS-2150, JRC JHS-770S largest conglomerate and the only Turk- phase of the two ships, RMK MARINE system. Consequently, both vessels have

GMDSS JRC JUE-87 500 Global List, the self-con? dence in client: the installation of a scrubber sys- gation features in all seas of the world by

SatCom Sailor 100GX Antenna what they achieved as RMK MARINE tem to both ships, in addition to LP-SCR being in full compliance with both the

Gyro Compass YOKOGAWA CMZ 900D until then and the trust felt in RMK MA- systems, to allow both ships to comply requirements of Tier III and IMO SOx

RINE’s solution partners in this project, with IMO 2020 SOx cap. Upon an evalu- 2020 cap. T.Elinor was delivered as both

Fire Detect/Extinguish Aksis Heat Exchangers led by MAN ES, the manufacturer of the ation, it was concluded that this modi? - SCR and Scrubber systems installed.

MAN Engines. At the beginning of the cation on both vessels was possible. The T.Adalyn was delivered with SCR Sys-