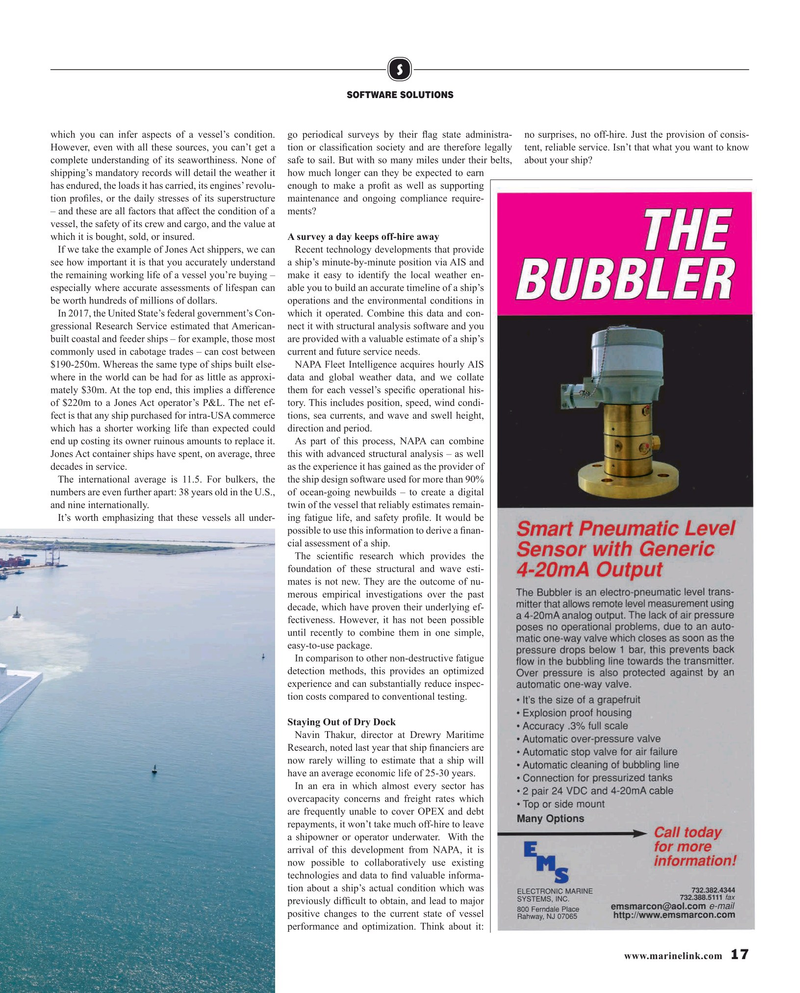 SOFTWARE SOLUTIONS which you can infer aspects of a vessel’s condition. go periodical surveys by their ? ag state administra- no surprises, no off-hire. Just the provision of consis-

However, even with all these sources, you can’t get a tion or classi? cation society and are therefore legally tent, reliable service. Isn’t that what you want to know complete understanding of its seaworthiness. None of safe to sail. But with so many miles under their belts, about your ship?

shipping’s mandatory records will detail the weather it how much longer can they be expected to earn has endured, the loads it has carried, its engines’ revolu- enough to make a pro? t as well as supporting tion pro? les, or the daily stresses of its superstructure maintenance and ongoing compliance require- – and these are all factors that affect the condition of a ments?

vessel, the safety of its crew and cargo, and the value at which it is bought, sold, or insured. A survey a day keeps off-hire away

If we take the example of Jones Act shippers, we can Recent technology developments that provide see how important it is that you accurately understand a ship’s minute-by-minute position via AIS and the remaining working life of a vessel you’re buying – make it easy to identify the local weather en- especially where accurate assessments of lifespan can able you to build an accurate timeline of a ship’s be worth hundreds of millions of dollars. operations and the environmental conditions in

In 2017, the United State’s federal government’s Con- which it operated. Combine this data and con- gressional Research Service estimated that American- nect it with structural analysis software and you built coastal and feeder ships – for example, those most are provided with a valuable estimate of a ship’s commonly used in cabotage trades – can cost between current and future service needs.

$190-250m. Whereas the same type of ships built else- NAPA Fleet Intelligence acquires hourly AIS where in the world can be had for as little as approxi- data and global weather data, and we collate mately $30m. At the top end, this implies a difference them for each vessel’s speci? c operational his- of $220m to a Jones Act operator’s P&L. The net ef- tory. This includes position, speed, wind condi- fect is that any ship purchased for intra-USA commerce tions, sea currents, and wave and swell height, which has a shorter working life than expected could direction and period. end up costing its owner ruinous amounts to replace it. As part of this process, NAPA can combine

Jones Act container ships have spent, on average, three this with advanced structural analysis – as well decades in service. as the experience it has gained as the provider of

The international average is 11.5. For bulkers, the the ship design software used for more than 90% numbers are even further apart: 38 years old in the U.S., of ocean-going newbuilds – to create a digital and nine internationally. twin of the vessel that reliably estimates remain-

It’s worth emphasizing that these vessels all under- ing fatigue life, and safety pro? le. It would be possible to use this information to derive a ? nan- cial assessment of a ship.

The scienti? c research which provides the foundation of these structural and wave esti- mates is not new. They are the outcome of nu- merous empirical investigations over the past decade, which have proven their underlying ef- fectiveness. However, it has not been possible until recently to combine them in one simple, easy-to-use package.

In comparison to other non-destructive fatigue detection methods, this provides an optimized experience and can substantially reduce inspec- tion costs compared to conventional testing.

Staying Out of Dry Dock

Research, noted last year that ship ? nanciers are now rarely willing to estimate that a ship will have an average economic life of 25-30 years.

In an era in which almost every sector has overcapacity concerns and freight rates which are frequently unable to cover OPEX and debt repayments, it won’t take much off-hire to leave a shipowner or operator underwater. With the arrival of this development from NAPA, it is now possible to collaboratively use existing technologies and data to ? nd valuable informa- tion about a ship’s actual condition which was previously dif? cult to obtain, and lead to major positive changes to the current state of vessel performance and optimization. Think about it: www.marinelink.com 17