While much of the maritime world slumps, the cruise sector is enjoying its most vibrant growth in a generation. Carnival Corporation, in particular, is doing very well as its financial performance is stronger than ever, with 2016 delivering the best year of earnings in company history. The company’s adjusted earnings for 2016 of $2.6 billion is the best annual financial performance in its 44-year history. With that, Hans Hederstrom, Managing Director give overview of CSMART, one of the newest and richly appointed simulation centers on the planet.

Overview
Carnival Corporation’s CSMART Academy has implemented a training environment concept in collaboration with the Transas Integrated Full Mission Simulation solution.
The simulators provide a wide array of programming and simulated exercises for various maritime scenarios. Working with the CSMART Academy team, Transas developed 12 cruise ship models and delivered 60 sailing areas and ports around the world, including Los Angeles, New York, Miami, Copenhagen, Stockholm, Singapore and Glacier Bay, Alaska that are specific for Carnival Corporation’s vessel operations.
Nautical simulator environment:
Technical simulator (TechSim) environment:
In collaboration with the CSMART Academy team, Transas developed three cruise ship engine models with different propulsion systems, including a virtual replica of ship automation systems.
The TechSim model uses the high tech ‘gamification’ with 3D engine compartments walk-through and usage of avatars controlled via large touchscreens or gaming controller to ensure realistic situational training for engine room and machinery functions. A unique replication of the Safety Management System is based on the real ships application.
The applied closed circuit TV (CCTV), recording and archiving system is similar to the CCTV used at the ESA Space Centre, with 90 full HD cameras observing and recording everything on the bridges and in the engine room to allow full picture team training. AV control, recording and archiving system with full synchronization of all workstations, cameras and audio. This was essentially required by the Carnival Corporation and the CSMART team in order to optimize the level of training experience.
Recent Developments
Building on the CSMART Academy’s legacy of safety training excellence, in July 2016 Carnival Corporation expanded its training operations with the opening of the Arison Maritime Center, featuring the CSMART Academy and a 176-room CSMART-Hotel. At nearly 110,000 sq. ft., the new CSMART Academy will more than double the capacity of the original center, enabling Carnival Corporation to train more of their cruise ship officers more often, spend more time training on simulators and provide more real-time feedback to officers. In 2017 CSMART will welcome 7,000 participants to one of 20 courses offered, Nautical as well as Engineering.
Investment in the Future
With the new facility that opened in July 2016 new simulators were developed, built and implemented with the latest technology from Transas. The simulators underwent more than 15 months of intensive development to ensure the visuals and operational characteristics closely model today’s technologically advanced cruise ships, providing an authentic shipboard experience for participants to build skills in navigating complex control and automation systems. This technology is part of the overall investment of an estimated $79m for building Carnival Corporation’s state-of-the-art Arison Maritime Center and Hotel, home of the CSMART Academy. The CSMART Academy’s mission is to provide the deck and technical officers from Carnival Corporation’s 10 global cruise line brands with the most technically advanced maritime training and professional development in the cruise industry. We have a relentless focus on world-class training and continuous improvement, underscoring that the safety of our guests and crew is the corporation’s number one priority. This results in a continuous investment by Carnival Corporation to the CSMART Academy’s training programs and equipment.
The Evolution of Simulation Training
Starting in 2012, the CSMART Academy expanded to begin training bridge and engineering officers from all of Carnival Corporation’s global brands – providing a world-class standard for safety and excellence in maritime operations. Referred to as role-based bridge and engine room management, the approach is based on roles rather than ranks, with the officers operating as a coordinated team.
The system builds on the airline industry model by using navigator and co-navigator roles. The navigator, who is “conning” the ship, is required to verbally communicate intentions to the co-navigator, whose tasks include monitoring, cross-checking and supporting the navigator. As needed, they are supported by the operations director, who must be a senior officer -- either the captain or staff captain. He or she maintains an overview and provides guidance as required. There is also an administrator to manage disturbances (alarms, internal communications) for the bridge team. A helmsman and a lookout complete the team.
As part of the team-based approach, CSMART Academy introduced new ways of communicating. In a departure from past protocol, this includes encouraging team members of all ranks and seniority to speak up to challenge or question a decision.
These fundamental changes were introduced in several stages, starting with the development of new bridge procedures for normal, abnormal and emergency operations. Current training also includes insight on human performance and its limitations. This transformation has resulted in a higher level of safety and operational excellence, with officers making effective use of the new structure and constantly evolving technology.
(As published in the March 2017 edition of Maritime Reporter & Engineering News) 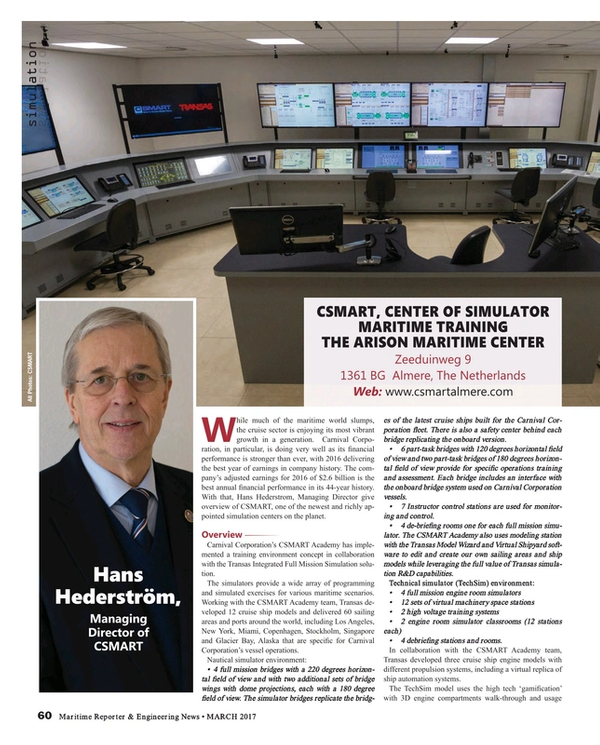