You Can Run, But You Can’t Hide

Windward Ltd. has taken advances in satellite communications at sea plus the massive amounts of new data available from ships, and created a satellite based maritime analytics system that provides information and insight on unusual vessel movements globally. Co-founder and CEO Ami Daniel explains.

In the eyes of Ami Daniel and Matan Peled, co-founders of Windward Ltd., nearly two-thirds of the world – the oceans – has literally been “the wild west.”
Until now.
In 2010 this pair of naval officers founded Windward Ltd., a maritime analytics company that brings the power of smart analytics to the oceans. “With the advent of satellite technology, it is now possible to know the whereabouts of vessels globally, but the amount of data is vast and largely meaningless without smart analytics,” said Daniel.
Founded to bring transparency to world fisheries, specifically to tackle the multi-billion-dollar problem of illegal fishing around the world, the company has since spread its focus to include the intelligence community, and most recently the offshore oil and gas business, as it quickly realized that the fisheries market was too limited for a young start up, and more importantly that very few organizations in this space are interested, or able, to tackle the problem through an investment in technology.  The company scored a nice reference last year when it cooperated with Reuters to provide insights and analysis for the ongoing coverage of the Libyan oil crisis, Daniel said. Worker protests had halted oil exports from the country, and Windward was able to provide a full arena analysis on all tankers in and around Libya, including their oil capacities and historical oil trade before the current situation.
“From the get go, we understood that the key was in analyzing the vast global movements of vessels and understanding when a specific ship – or group of ships – was showing unexpected ‘behavior,’” Daniel said. When the company realized that the illegal fishing market was not sufficient or funded well enough to support the company, it turned its attention to the intelligence community. “We designed our first product to meet the needs of intelligence communities, which have a huge interest in understanding the cross-border movement of ships, and a corresponding willingness to invest in cutting edge technologies,” said Daniel.
“Obviously, an intelligence agency would want to know when ships are acting suspiciously anywhere in the world. Windward’s technology has been adopted by intelligence agencies around the world and widely recognized for its unique operational contribution. Now, we have set sail to engage the oil and gas market, giving this industry the ability to have full visibility across the very complex, cross-border operations of oil and gas companies that provide the world’s energy flow.”

Meet Marint
The Windward technology takes the vast amounts of data and distills it into insights and information at a single ship level. Its first product, MarInt, is described by Daniel as the first satellite-based maritime analytics system in the world, developed specifically with the needs of intelligence communities in mind. While he was, of course, not at liberty to explain the exact methodology behind the system, he was able to put in perspective the toll and time it takes to launch such an endeavor.
“We set out to deeply understand and try to solve burning operational challenges,” said Daniel. “A start up is – has to be – a work of love, as it truly takes over not only your life, but the lives of your family and friends. In the course of these four years, we’ve invested more than 100 man years in developing the smart algorithms that make sense of maritime data. We have flown hundreds of thousands of miles a year, connecting the field insights to our development teams’ innovation. And we have been fortunate to attract investors with a passion for our technology and a deep commitment to what we are doing.”
“What has guided us throughout the development of our technology is making sure that we don’t solve “theoretical problems” but provide a response to real-world problems that organizations need to solve,” Daniel said. “We made it our mission to deal with the problem of scale: The Windward technology allows us to apply expert analytics to all vessel movements worldwide. Windward provides full visibility on vessels globally, based on their historical, current and projected behaviors. This full visibility across the seas is unprecedented.”
The beauty of Windward and its mission, could be, above all else, timing. While communication capability on land zips along at light speed, information from, to and about the world’s oceans and its inhabitants is in its infancy. While getting it right is always a solid business mantra, timing it right is, too. With that, Daniel and his team see a world of opportunity ahead. The maritime market is one of the few ‘analog’ markets left out there, and we believe this is the right time to see how state of the art technology can support more efficient maritime operations,” Daniel summarized.

Hack Attack
While hacking of all computer systems is a continual problem, the issue of hacking AIS – which has been widely discussed in recent months – is not seen as a problem for Windward Ltd.
“While hacking someone’s AIS may seem like to a big problem, the real issue starts when a vessel tries to deliberately change its own transmissions – thus assuming a new or stolen identity. More often than not, such false identities are used to try and conceal illegal activities,” said Daniel.
To that end, MarInt was designed to double and triple check every part of the data set before digesting it into the system. “As we monitor the oceans for some time now, we have built a proprietary analyzed database on all vessels, learning their identities and routine behaviors. MarInt can then analyze and alert on vessels that are suspected of identity theft or tampering with their transmissions,” Daniel said.

The Founders
Ami Daniel and Matan Peled co-founded Windward in 2010, and Daniel is the CEO. Windward Ltd. is self-dubbed as the world leader in satellite-based maritime analytics. Daniel and Peled were naval officers in the same unit of the Israeli Navy, and as Daniel explains it; “this adventure felt like a natural extension of our love of all things maritime.” He said Peled “is somewhat of a captain at heart, both in his personal life and in Windward. He has an unmatched capability for solid, analytic business reasoning, and when he takes something head on – you simply know it will be absolute, no shortcuts, carefully done to the tiniest details.”
“The last several years mark the entrance of the maritime domain into the information age, as ever-growing amounts of data are becoming commercially available.  While just a few years ago maritime data was mostly database driven, the introduction of satellite AIS changed the game, and it is now possible for the first time ever to know the actual whereabouts of vessels. This shift in the market is at the heart of the Windward solution – if previously “best practices” included relying on static databases to monitor vessels, we introduced innovative dynamic tools to analyze ship movements in real time and across the globe, with the ability to identify unexpected (some might say suspicious) behavior on a micro level.
Our technology is often able to change the workflow process, bringing new angles to the game that are simply unobtainable without using big data analytics. This is both a huge opportunity and a challenge.” 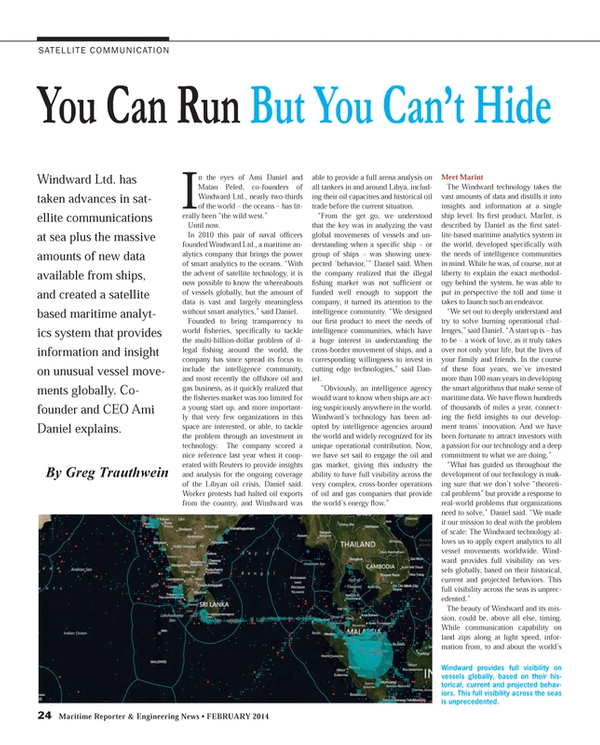 Read You Can Run, But You Can’t Hide in Pdf, Flash or Html5 edition of February 2014 Maritime Reporter