One of the  new tools that engine builders are using these days to reduce fuel consumption and greenhouse gas emissions is Valve Control Management (VCM), ABB’s variable valve train system, more so since duel-fuel engines become an increasingly popular choice by shipowners.
Initially introduced in the shore-based gas plant sector, Christoph Rofka, Senior General Manager for New Business at ABB conjectured at that time and with an eye to the future:  “A technology like this speaks to the increasing trend to explore dual-fuel options and create solutions for gas. These engines are also very similar to what you find on many ships, and we believe that VCM will very soon be highly relevant for and effective in the marine industry.”
Basically the technology helps a turbocharger to manage air actively and is particularly effective for high-performance engines in which large operating ranges or rapid load responses are required such as tugboats, icebreakers, pump drives, compressor drives and power generators.
The manufacturers explain that generally, most valve train systems must be set for a particular engine load and they are matched to a particular operating condition, consequently they cannot switch flexibly from one load to another and so compromise on fully leveraging the engine’s full potential. Running an engine with this type of valve train system at a load other than what it was originally set to results in lower efficiency, smoke, and greater thermal load on the engine.
To ameliorate, VCM was specifically designed as an intelligent valve train system that responds adaptively to change the timing in an engine’s valves so that it always receives an ideal amount of air. This technology thus manages transient behaviour, i.e. changes in engine speed, load or both, so that engines can accelerate more rapidly from one load point to another. VCM optimizes the configuration of the engine for every load, allowing the engine to work as efficiently as possible. A turbocharging solution equipped with VCM can take an engine that is idling to full load in half the time that it normally takes, in some cases even more quickly. 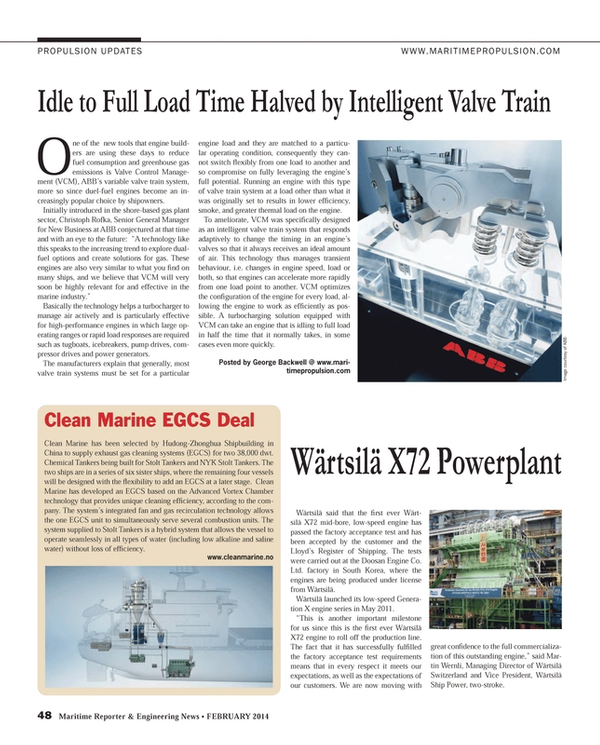