Drones do it and spacecraft have too, for many years. Recently, also, automobile makers and small boat makers have introduced their first autonomous vehicles on the streets, and waterways.
Unmanned vessels on the ocean is no longer a dream – it is a reality. And according to those in the know, the reality will really start to come to fruition in the coming decaded.
The MUNIN project (Maritime Unmanned Navigation through Intelligence in Networks) is investigating potential concepts for a fully or partially unmanned merchant vessel. The case ship is a dry bulk carrier of handymax size, operating on routes between Europe and South America in the beginning. The project is being partly funded by the EU in pursuit of one of the project outcomes of the European Waterborne Strategic Research Agenda: The autonomous ship.
Partners of the MUNIN project are: the Fraunhofer CML, MARINTEK, Chalmers University, Hochschule Wismar, Aptomar, MarineSoft, MARORKA, University College Cork. The available budget is of $5.13m in total whereby $3.9m is funded by the EU. The MUNIN project was started on September 1, 2012, and will be finished in three year time.
Partly or fully unmanned ships will offer many possible benefits, but one of the main driving forces for the project has been the problem of recruiting sufficient qualified crew-members. This is already a significant problem in Europe, and it will increase as “slow steaming” becomes more widespread. Lower speeds and longer voyage durations will increase the overall demand for crew while reducing the attractiveness of the job: staying at sea for three weeks or more and communicating with friends and family via cost intensive telecommunication systems.
The idea of a ship sailing without a lookout and helmsman is worrying and even frightening to many people. One important part of the project, therefore, is to show that unmanned ships can be at least as safe as conventional vessels, and may even be safer. Professionals agree that “human error” is the cause of between 65 and 90% of shipping accidents. While the definition of human error and the role played in it by technology can be discussed, there is arguably great potential for improving safety by relieving the crew of the most tedious tasks, such as keeping a lookout over open sea for three weeks at a stretch. The MUNIN project will employ the KISS principle: Keep it Simple Stupid! It is important that the technology employed is well-tried and trustworthy. It is also important to use the appropriate technology for the problems at hands. 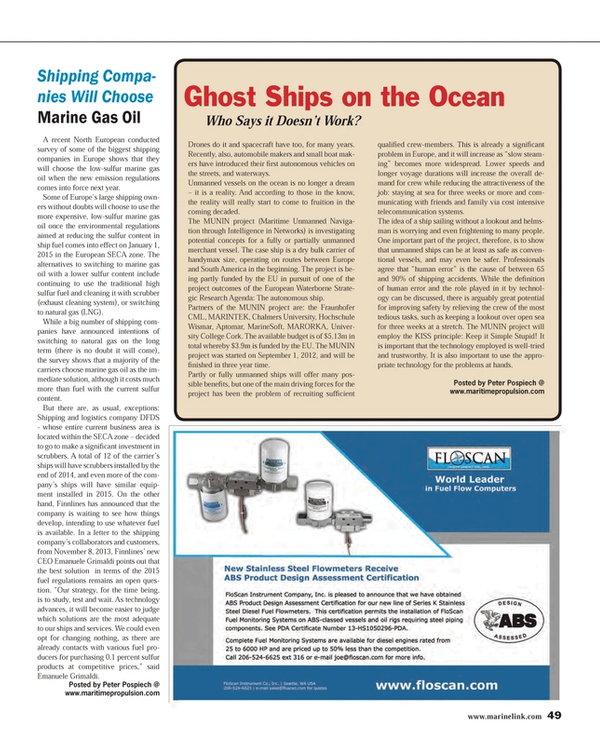