The current market position for ballast water treatment systems is similar to the early phase of the introduction of oily water separators. Eventually, the systems that did not work reliably were forced out, but at great expense to shipowners. While some ballast water treatment system manufacturers struggle to meet the regulatory and operational requirements of global trade, regulators are still exploring how to enforce the 2004 International Convention for the Control and Management of Ships’ Ballast Water and Sediments. Shipowners must evaluate these market realities in light of their operational commitments. Otherwise, they risk off-hire time, prosecution and business failure. Severn Trent De Nora delivered a ballast water treatment system to a very large crude carrier (VLCC) currently under construction. Dual Balpure systems will be supplied to the vessel which has two 3000-cu. m./hr. segregated ballast pumps. The design and integration of the Balpure systems demonstrates the trade-offs that shipowners must make in order to meet the dual requirements of business success and environmental responsibility. Several ballast water treatment systems involve either electrochlorination or UV radiation disinfection to prevent the transfer of invasive marine species. Both incur a power penalty that can lead to increased fuel consumption especially if the full ballast flow is to be processed through the treatment system. This creates a situation in which solving the invasive species problem adds to another environmental problem: the emission of greenhouse gases.
The Balpure system applies established electrochlorination technology to oxidize and disinfect aquatic invasive species. The main ballast flow is first filtered, and then a slip stream of seawater is diverted to the electrolyzer and used to generate sodium hypochlorite. Only about one percent of the total ballast flow is processed to treat the entire ballast water. This reduces power usage and system weight to minimize impact on fuel consumption, thus limiting greenhouse gas emissions. Balpure’s flexibility adds to this further. Biocide generation rate can be reduced for shorter voyages so that, for a three- to four-week voyage dosed at 8 ppm, the Balpure power consumption is approximately 33ACkW/1000 cu. m./hr. Shorter voyages can take advantage of lower biocide dosing at 6 ppm where power consumption is approximately 24 ACkW/1000 cu. m./hr. Where vessel trade routes indicate the cooling water overboard discharge temperature will be below 15°C, an optional steam or electric heating system is available to economically heat only the slipstream.

Decisions about Deballasting
The most striking operational difference between the various disinfection technologies is when the treatment occurs. For systems that must treat both during uptake and discharge, a hidden problem will manifest when the treatment system is not operable or malfunctions during deballasting. Some technologies that must treat at uptake and discharge make tank stripping nearly impossible. UV-based systems must filter and treat the motive water (that isn’t transported in the ballast tanks) and treat the stripped water. Balpure makes tank stripping simple and inexpensive as biocide residual monitoring is all that is needed. The stripping motive water has high enough oxidant demand to neutralize the residual biocide from the stripped ballast water - thus additionally reducing sodium bisulfite consumption.

Ensuring Operational Reliability
Maintaining operational reliability inevitably means some degree of system redundancy. The treatment system must support operations at all times, even if with limited capacity. In order for vessels with high-paced schedules to avoid a total outage, this means installing redundant auxiliaries. One single fault should not put the whole system out of commission. Marine vessels subject some somewhat fragile subsystems to intense vibration and elevated temperatures. Additionally, some systems employ on-deck components exposed to seawater.
Standard redundancy built into the Balpure system includes multiple slipstream booster pumps complete with preinstalled standby spares. Likewise, the hydrogen dilution (air) blowers are 2 x 100 percent with built-in spare for uninterrupted operations. A self-contained and independent neutralization skid is provided with at least one spare pump built in or on standby. Some vessels require fully redundant systems to support port and starboard ballast header operations with crossover capability.
Additional enhancements to be included aboard the newbuild VLCC include dual Balpure biocide generators with dedicated hydrogen separation and dilution blower systems. Each segregated ballast header has a dedicated 40-μm mesh ballast water filter, and each filter has a dedicated backflush pump and backflush valve. Overall, the only major components not 100% redundant are the centralized controls.

Minimizing Operational Expenses
Balpure’s wide treatment rated capacity allows the natural variations in actual ballast flow rate, sensed by the flow meters provided with the system, to automatically adjust biocide generation rate from “0” to maximum. The typical starts and stops and changes to the discharge head affect ballast flow rates dramatically. Many systems were not conceptualized with these requirements and have warm up and cool down times that could cause periods of ineffective treatment.
During the hypochlorite generation process employed by electrochlorination systems, the cathode surfaces will accumulate scaling from magnesium hydroxide and calcium carbonates. Typically this scaling is addressed with periodic chemical (acid) or mechanical cleaning. However, the Balpure proprietary electrodes are automatically self-cleaned to address this concern.
The Balpure system produces treated seawater in the ballast tanks that is non-corrosive and will not impact the life expectancy of ballast tank protective coating systems, pipe work and associated valves, valve actuators or other ballast tank fittings and instrumentation. The extensive corrosion testing program undertaken by GL Noble Denton demonstrated that the system has no effect on coated steel, naval bronze and copper-nickel alloys.
Not all treatment systems include a filtration step. Yet reducing the amount of sediment build up in ballast tanks can reduce fuel costs and vessel draft so that vessels such as VLCCs can carry more cargo. By not including a filter, shipowners lose this financial payback. Sediment build up also poses a compliance risk. Balpure’s disinfection process leaves a residual amount of biocide in the ballasted water that eliminates re-growth that could otherwise contaminate the water. The potential for regrowth of organisms that could take refuge in sediments could ultimately lead to a breach of IMO discharge standards. Having to undertake more frequent ballast tank cleaning would become an additional operational expense for systems that don’t filter or don’t maintain disinfected conditions in the ballast tanks.
In conclusion, it is clear that fees and fines will be imposed and examples will be made when regulators discover vessels discharging ballast water that exceeds the limits on living organism counts specified by the ballast water management convention. This will generate much needed revenue to pay for the eventual reversal of the environments harmed by invasive species. But it will be disastrous for shipowners who have purchased and operated ballast water treatment systems in good faith. 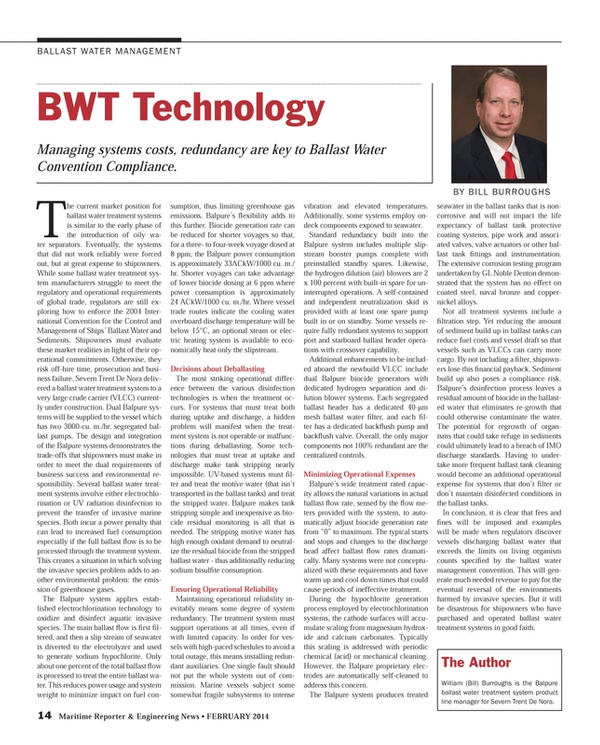