When Gustaf de Laval read in 1877 an article in the German periodical ”Milchzeitung” (Milk News Paper) about centrifugal separators, he certainly did not expect that it would lead to his founding of a global acting company with around 16,400 employees nearly 140 years later. His first continuous separator, with a capacity of 130 liters per hour, was demonstrated 1879 in Stockholm; and four years later, in 1883, he and his partner, Oscar Lamm, established the company AB Separator. And again 80 years later, in 1963, the company changes its name from AB Separator to the now well-known Alfa Laval AB. The name “Alfa” derives from the alpha discs (a separator technique) and “Laval” from the founder of the company. Today the company is listed on NASDAQ OMX, and, in 2012, posted annual sales of about $4.8B.
Today, the company focuses on energy optimization, environmental protection and food production through technological leadership in heat transfer, separation and fluid handling in the widest range. The company’s activities in respect of the international shipping market is of great importance. As the company says, “...the marine market is changing with ever-increasing speed, especially when it comes to new demands concerning energy efficiency and environmental protection.”
In accordance to this its product portfolio covers all necessary components that are designed to make shipping reliable, environmentally friendly and efficient. Whether you talk about environmental protection, oil treatment, cooling and heating, steam and heat generation, waste heat recovery, tank cleaning, safety and desalination – the products from Alfa Laval for the global, green shipping industry are future oriented and innovative.

New Test & Training Center
To improve and testify its ability to deliver top quality product and service, the company recently opened a ship simulation facility – touted by the company as  the largest and most advanced in the marine industry – which adds considerable strength to the company’s research and development efforts. With this, the company said, it is no longer needed to make expensive tests on board a vessel for the relevant Alfa Laval marine products, as they can now be tested and certified in a 500 hours test procedure in this new test facility.
The 250 sq. m. testing area is built around a 2-MW MAN medium-speed four-stroke marine engine of type 9L28/32. The engine drives an AvK-generator and generates 1,880 kW at 750 rpm. For the city of Aalborg, the start of operations at the center has meant an immediate energy bonus. The power generated by its 2 MW engine is fed into the local grid, while the facility’s excess heat is made available for district heating. The engine can operate on diesel and HFO 380 cst with high sulfur in order to test the scrubber under practical and worst conditions.
The new testing facility comprises commercial and prototype equipments from all of Alfa Laval’s marine product portfolio. A dedicated control room and a training complex are connected to the test system. Located close to the Limfjord, the test center is supplied with seawater via an 800m-long pipeline.
The process lines are full size and organized as they would be on an actual vessel at sea, though connected to a unified control system. They comprise a fuel line, an integrated water line, a steam line and an exhaust line, as well as the heat exchangers and other auxiliaries needed to support them.

Green Tech
According to the company, the initial reason for building the facility was the advancement of the company’s exhaust gas cleaning technology PureSOx.
Apart from further developing the scrubber, which has recently seen repeat orders from both DFDS and Spliethoff, the center will be working with NOx reduction in association with the company Haldor Topsøe. The project will focus on selective catalytic reduction (SCR), which is a technical alternative to exhaust gas recirculation (EGR), a process already supported by Alfa Laval’s PureNOx, a water treatment system that uses a centrifugal separator to clean the wash water in the wet scrubber.
In other areas, the Alfa Laval Test & Training Center will be working to combine greener methods of operation with financial benefit. Energy efficiency will be explored at the facility, as a means of both saving money on operating costs and further reducing CO2 and other emissions, according to Alfa Laval.
Among the facility’s key components in this regard is the new FCM One (Fuel Conditioning Module), with which a more efficient changeover between HFO and distillates can be managed. Another key component is the center’s exhaust gas boiler, which will be involved in one of the first research projects.
“Energy efficiency is one of the greatest challenges facing the global shipping industry today, but also one of the greatest opportunities for competitive gains,” says Niclas Dahl, Alfa Laval Market Unit Manager, Energy. “Here at the center we can explore the interaction between components – within and even across process lines – in a controlled and consistent manner. This will speed up the development of more energy-efficient equipment and new energy-saving techniques.”

Training Opportunities
The new center will allow Alfa Laval to intensify its training activities, adding Aalborg to existing training sites in Stockholm, Manila and Shanghai. Beyond in-depth training for Alfa Laval sales and service employees, the center will provide a range of external training options.
In the future, shipowners and operators can send engineers and technical supervisors to the center for hands-on training in new technologies and Alfa Laval products as well as service training aimed at minimizing maintenance-related operating costs. For shipbuilders, there will also be training in the sizing and configuration of equipment for maximum economy, as well as the impact of design choices on service possibilities and the equipment’s daily use.
An additional and equally important test component is the newly developed Ballast Water Treatment System PureBallast 3.0.

Unwanted Stowaways
It is a scene suited for a horror film. Each year in May hundreds of thousand of mitten crabs crawl out of the river Elbe next to Geesthacht, whereby the palm-sized animals could be captured and destroyed. In 1912 the hairy crab species, which actually originates from North China, were found for the first time in Germany. “They have been introduced together with the ballast water from ships,” said Dr. Gerhard Schories, Technical Director of the ttz-institute for water-, energy- and landscape management, Bremerhaven, Germany.
While ballast water is essential for safe and efficient modern shipping operations, it poses serious ecological, economic and health problems due to the multitude of marine species carried in ships’ ballast water. These include bacteria, microbes, small invertebrates, eggs, cysts and larvae of various species. The transferred species survive to establish a reproductive population in the host environment, becoming invasive, out-competing native species and multiplying into pest proportions.
The UNO considers this undesired spread of so-called invasive species one of the greatest threats to the maritime environment. This is why new regulations for ballast water have been put in place by the IMO convention.  These strict guidelines state that ballast water management systems may not harm the environment. The substances used must be biodegradable and may not present any kind of additional risk to humans, the environment or the ship.
Ballast water treatment is no longer an issue thanks to Alfa Laval’s PureBallast 3.0.
With the Alfa Laval’s PureBallast 3.0, it is very simple to ensure that there is only water in the vessels ballast tanks – with no harmful organisms such as plankton, bacteria or viruses. PureBallast, which was developed in cooperation with Wallenius Water, was originally launched in 2006 as the world’s very first commercially available ballast water treatment system. Since then it has matured considerably, arriving in an updated PureBallast 2.0 version with EX options in 2010. Already then there were improvements to its energy efficiency and its basic construction, but nothing to compare with the advances in PureBallast 3.0.
“This time we’ve completely rewritten the book when it comes to PureBallast,” says Per Warg, the Alfa Laval Business Manager responsible for the system. “We’ve achieved space savings of 50%, energy savings of up to 60% and huge improvements in flexibility and flow capacity. But we’ve also learned a great deal that can be of impact for ballast water treatment in general.”
The key component in a UV-based system is its reactor, the chamber where UV treatment actually occurs. In standard UV treatment, organisms are eliminated directly or rendered unable to reproduce through damage to their DNA and biological structure. In PureBallast, the treatment process is enhanced by AOT (Advanced Oxidation Technology), which creates free radicals that cause irreversible cell membrane damage. The AOT effect has a proven biological impact leading to better treatment performance and lower energy consumption.
The completed PureBallast 3.0 system, while based on the same treatment technology as its predecessors, is a leap forward in terms of its compactness, energy efficiency and flexibility. Most striking at a first glance is its size.
Where previous PureBallast reactors handled 250 cu. m./hr. each, individual PureBallast 3.0 reactors can handle either 300 cu. m./hr. or 1,000 cu. m./hr. Using the larger reactor, which is not much bigger than the original 250 cu. m./hr.  version, the footprint of a 1,000 cu. m./hr. system is literally cut in half. The bigger the system, the bigger the space savings.
“Needless to say, the new reactor capacities greatly reduce the footprint of larger systems,” said Warg. “With one reactor doing the same job that four did before, PureBallast 3.0 is competitive across the entire flow range up to 6,000 m3/h.”
The size, however, is not the only thing that makes PureBallast 3.0 competitive. The new system is also as energy efficient as it is compact.
“The new 1,000 cu. m./hr. reactors consume just 100 kW at full power, which is a minimum energy savings of 30% over previous versions,” said Warg. “And when full power isn’t needed, the energy savings can be as much as 60%.”
For shipyards, the most appealing aspect of PureBallast 3.0 will not be its energy-efficient operation, but rather its high degree of flexibility and ease of installation, even when it comes to the highest flow rates. With the new reactor capacities, only one reactor will be needed per 1,000 cu. m./hr., which makes designing a system considerably simpler.
“Alfa Laval has always been at the forefront of ballast water treatment, but PureBallast 3.0 truly redefines that leadership,” said Warg. “We’re looking not just at a new generation of the system, but rather at a whole new standard that lives up to the tougher demands raised by today’s customers. Where size, economy and energy efficiency are important, I’ve no doubt that customers will find what they’re looking for in PureBallast 3.0.”
And Alfa Laval’s Marine & Diesel president Peter Leifland summarizes:
“The Alfa Laval Test & Training Center is the ultimate proof of our commitment to R&D and meeting the challenges faced by the marine industry. It’s inauguration was a celebration of that commitment and the starting shot for a new era.” 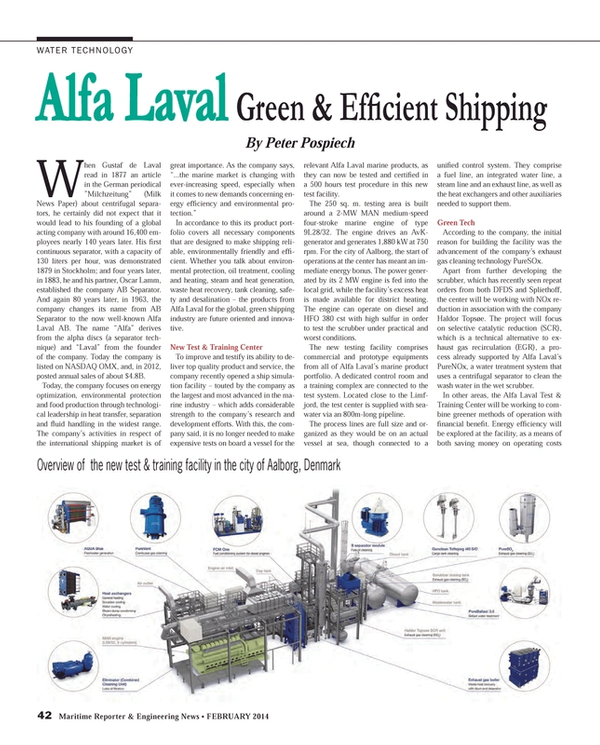