Available FPSOs
The number of production units off field and available for redeployment continues to grow. There are now 19 FPSOs, four production semis and one spar idle. The latest to join the inventory of idle units is the Perintis, a 640,000 bbl FPSO with 35 kb/d processing capability that had operated offshore Malaysia since 1999.
Redeploying many these idle units will be difficult. A large portion of the inventory is comprised of FPSOs converted from old, single hull tankers. Eleven of the idle FPSOs are single hull, seven of which were built more than 30 years ago. They will be difficult to place.
Then there is the need to find a suitable match between the field requirement and the unit. Not so easy to do this.Typically the redeployment contract involves modification of the process plant and mooring system, plus general upgrade to the entire unit. The more different the new field, the higher the modification cost. At some point it makes sense to use a new hull or find a suitable tanker to use for conversion.
But more general, given the historical rate of redeployments, there are simply too many idle units to be fully absorbed. The historical ordering pattern of FPSOs illustrates the ability to absorb idle units.
Over the past 10 years there have been orders for 136 FPSOs. Of the total, 82% of the orders (112 units) have been first time FPSOs. They were constructed or converted for the project – and did not previously operate as production units. Only 18% of the orders (24 units) were redeployments of existing FPSOs to a new field. In effect, it took ten years to redeploy 24 idle FPSOs. At this pace, it will take eight-plus years to redeploy the current idle inventory of FPSOs – assuming no additional FSPOs come off field (which of course will happen).
The large, growing inventory of idle production floaters is a warning to leasing contractors and lenders to be conservative on residual values in FPSO bids and financings. Anything more than scrap value is likely optimistic, even for FPSOs built on new or young hulls.

Production Floater Orders
The market seemed to hit resistance in 2013 – and resistance has continued into 2014. FPSO orders in particular have been relatively weak. Over the past 10 years, an average of 13-14 FPSOs have been ordered annually. Only 11 FPSO contracts were placed in 2013 and no orders for FPSOs were placed in the first month of 2014.
Details for production floater orders in 2013/14 are available at www.imastudies.com.
Resistance seems to be in the supply chain. Construction costs have been increasing, local content targets have been creating bottlenecks and access to financing has been constrained. Oil company investment resources also have been shifting to shale oil and gas project development. We see supply chain resistance and competition for investment resources from shale/tight oil projects continuing over the near to midterm.

Five Year Outlook for Orders
We have just completed a detailed forecast of additional production floater requirements over the next five years. In the most likely market scenario, we forecast orders for 101 oil/gas production floaters, 25 LNG processing floaters and 35 FSOs between 2014 and 2018.
Capex associated with these orders is expected to be around $136 billion. FPSO acquisitions will account for 67% of the capex, other oil/gas FPSs 14%, FLNGs 13%, FSRUs 4% and FSOs 2%.
Our new forecast is significantly lower than the forecast made in early 2013. Over the past year it has become clear that supply chain issues and other constraints are much stronger than previously thought. Deepwater project start opportunities keep growing – evidenced by the growing backlog of projects in the planning stage. But capability limitations in the supply chain, increasing project complexity, escalating costs, access to financing and bottlenecks created by local content targets appear to be worsening. These factors have been constraining – and will continue to constrain – deepwater project starts.
Another reason for the drop is the growing diversion of available investment resources to shale oil/gas projects. Alternative opportunities to invest in shale oil/gas development are eroding oil company investment in deepwater development. We see the diversion of resources becoming greater over the next several years.

IMA provides market analysis and strategic planning advice in the marine and offshore sectors. Over 40 years we have performed more than 350 business consulting assignments for 170-plus clients in 40-plus countries. We have assisted numerous shipbuilders, ship repair yards and manufacturers in forming a a plan of action to penetrate the offshore market. Our assignments have included advice on acquiring an FPSO contractor, forming an alliance to bid for large FPSO contracts, satisfying local content requirements and targeting unmet requirements through technology development.
Tel: 1 202 333 8501
e: imaassoc@msn.com
www.imastudies.com 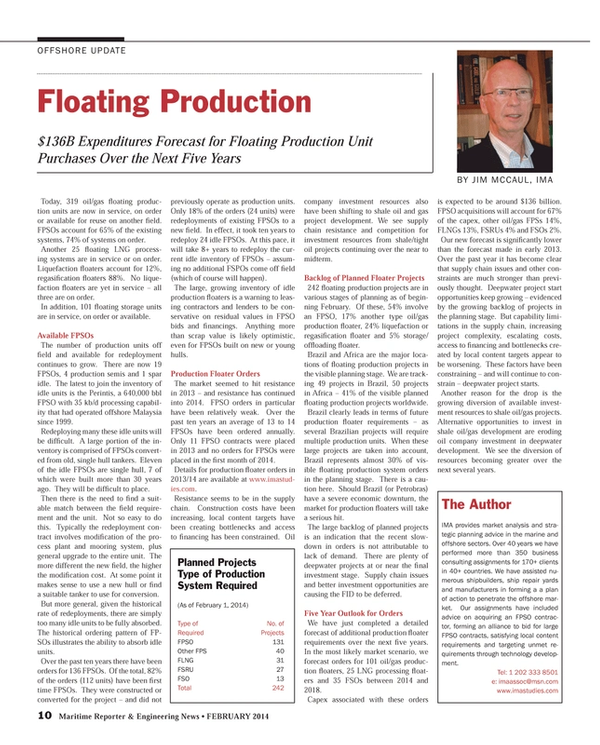