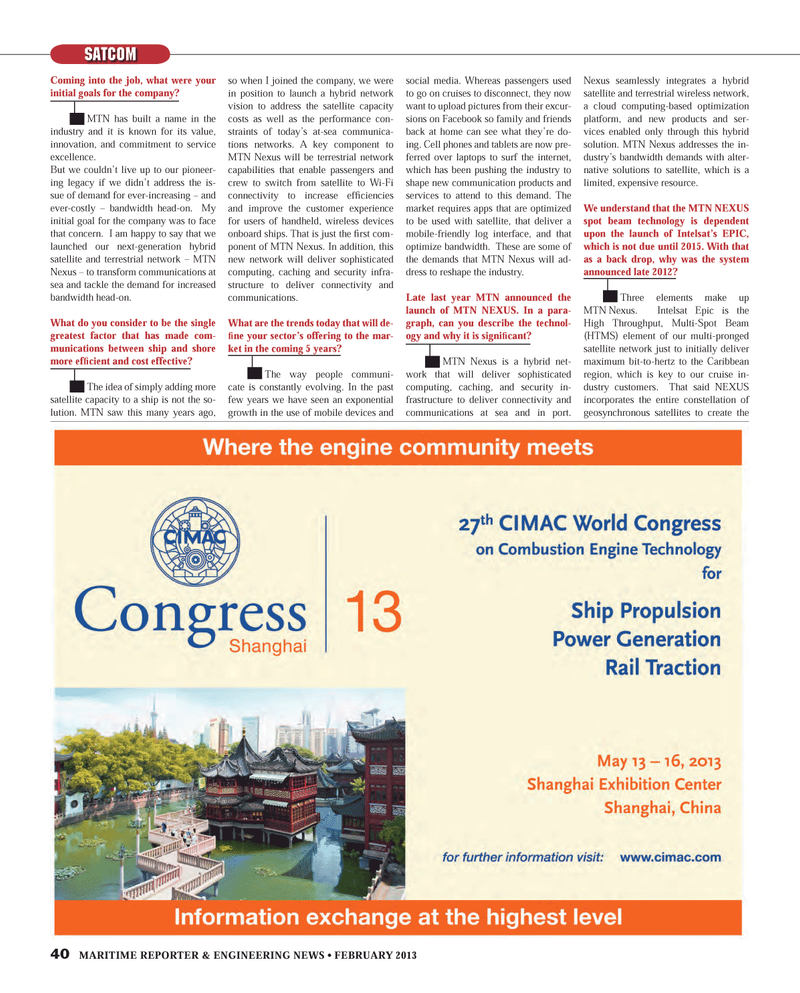 40 MARITIME REPORTER & ENGINEERING NEWS ? FEBRUARY 2013 Coming into the job, what were your initial goals for the company? MTN has built a name in the industry and it is known for its value, innovation, and commitment to service excellence. But we couldn?t live up to our pioneer- ing legacy if we didn?t address the is- sue of demand for ever-increasing ? and ever-costly ? bandwidth head-on. My initial goal for the company was to face that concern. I am happy to say that we launched our next-generation hybrid satellite and terrestrial network ? MTN Nexus ? to transform communications at sea and tackle the demand for increased bandwidth head-on.What do you consider to be the single greatest factor that has made com- munications between ship and shore more ef Þ cient and cost effective? The idea of simply adding more satellite capacity to a ship is not the so-lution. MTN saw this many years ago, so when I joined the company, we were in position to launch a hybrid network vision to address the satellite capacity costs as well as the performance con-straints of today?s at-sea communica- tions networks. A key component to MTN Nexus will be terrestrial network capabilities that enable passengers and crew to switch from satellite to Wi-Fi connectivity to increase efÞ ciencies and improve the customer experience for users of handheld, wireless devices onboard ships. That is just the Þ rst com- ponent of MTN Nexus. In addition, this new network will deliver sophisticated computing, caching and security infra-structure to deliver connectivity and communications.What are the trends today that will de- Þ ne your sector?s offering to the mar- ket in the coming 5 years? The way people communi- cate is constantly evolving. In the past few years we have seen an exponential growth in the use of mobile devices and social media. Whereas passengers used to go on cruises to disconnect, they now want to upload pictures from their excur- sions on Facebook so family and friends back at home can see what they?re do-ing. Cell phones and tablets are now pre-ferred over laptops to surf the internet, which has been pushing the industry to shape new communication products and services to attend to this demand. The market requires apps that are optimized to be used with satellite, that deliver a mobile-friendly log interface, and that optimize bandwidth. These are some of the demands that MTN Nexus will ad-dress to reshape the industry. Late last year MTN announced the launch of MTN NEXUS. In a para-graph, can you describe the technol-ogy and why it is signiÞ cant? MTN Nexus is a hybrid net- work that will deliver sophisticated computing, caching, and security in-frastructure to deliver connectivity and communications at sea and in port. Nexus seamlessly integrates a hybrid satellite and terrestrial wireless network, a cloud computing-based optimization platform, and new products and ser-vices enabled only through this hybrid solution. MTN Nexus addresses the in-dustry?s bandwidth demands with alter- native solutions to satellite, which is a limited, expensive resource.We understand that the MTN NEXUS spot beam technology is dependent upon the launch of Intelsat?s EPIC, which is not due until 2015. With that as a back drop, why was the system announced late 2012? Three elements make up MTN Nexus. Intelsat Epic is the High Throughput, Multi-Spot Beam (HTMS) element of our multi-pronged satellite network just to initially deliver maximum bit-to-hertz to the Caribbean region, which is key to our cruise in-dustry customers. That said NEXUS incorporates the entire constellation of geosynchronous satellites to create the SATCOMMR #2 (34-41).indd 40MR #2 (34-41).indd 402/3/2013 1:05:24 PM2/3/2013 1:05:24 PM