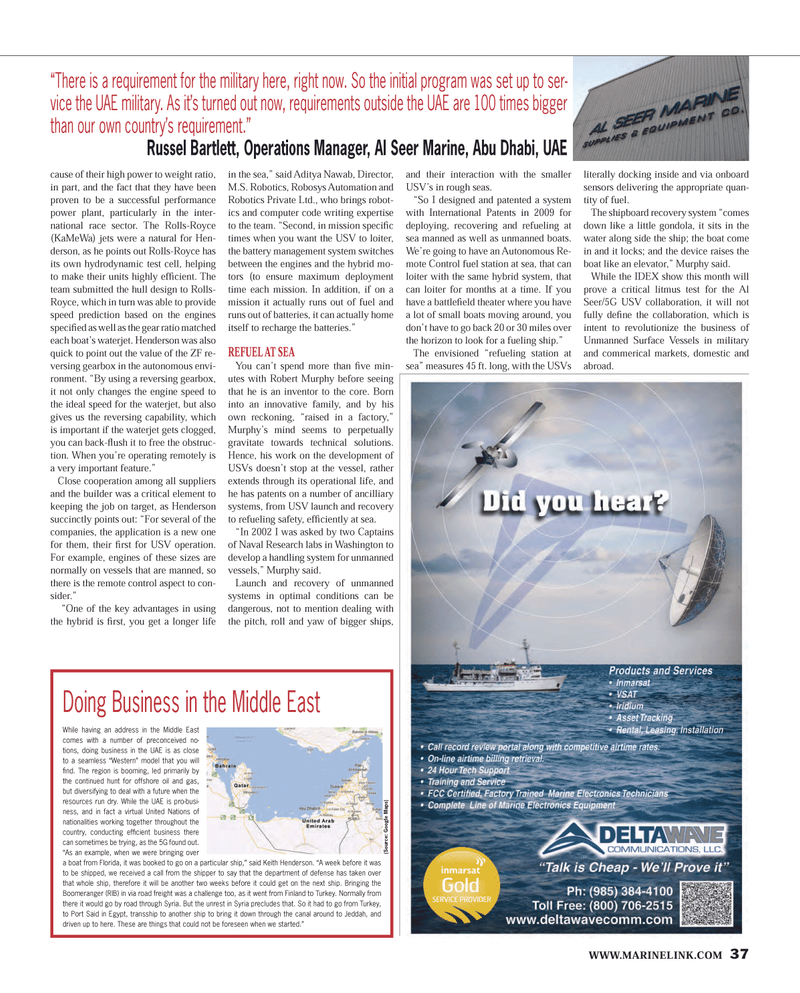 WWW.MARINELINK.COM 37cause of their high power to weight ratio, in part, and the fact that they have been proven to be a successful performance power plant, particularly in the inter- national race sector. The Rolls-Royce (KaMeWa) jets were a natural for Hen- derson, as he points out Rolls-Royce has its own hydrodynamic test cell, helping to make their units highly efÞ cient. The team submitted the hull design to Rolls-Royce, which in turn was able to provide speed prediction based on the engines speciÞ ed as well as the gear ratio matched each boat?s waterjet. Henderson was also quick to point out the value of the ZF re-versing gearbox in the autonomous envi-ronment. ?By using a reversing gearbox, it not only changes the engine speed to the ideal speed for the waterjet, but also gives us the reversing capability, which is important if the waterjet gets clogged, you can back-ß ush it to free the obstruc- tion. When you?re operating remotely is a very important feature.?Close cooperation among all suppliers and the builder was a critical element to keeping the job on target, as Henderson succinctly points out: ?For several of the companies, the application is a new one for them, their Þ rst for USV operation. For example, engines of these sizes are normally on vessels that are manned, so there is the remote control aspect to con-sider.? ?One of the key advantages in using the hybrid is Þ rst, you get a longer life in the sea,? said Aditya Nawab, Director, M.S. Robotics, Robosys Automation and Robotics Private Ltd., who brings robot-ics and computer code writing expertise to the team. ?Second, in mission speciÞ c times when you want the USV to loiter, the battery management system switches between the engines and the hybrid mo-tors (to ensure maximum deployment time each mission. In addition, if on a mission it actually runs out of fuel and runs out of batteries, it can actually home itself to recharge the batteries.? REFUEL AT SEA You can?t spend more than Þ ve min- utes with Robert Murphy before seeing that he is an inventor to the core. Born into an innovative family, and by his own reckoning, ?raised in a factory,? Murphy?s mind seems to perpetually gravitate towards technical solutions. Hence, his work on the development of USVs doesn?t stop at the vessel, rather extends through its operational life, and he has patents on a number of ancilliary systems, from USV launch and recovery to refueling safety, ef Þ ciently at sea. ?In 2002 I was asked by two Captains of Naval Research labs in Washington to develop a handling system for unmanned vessels,? Murphy said. Launch and recovery of unmanned systems in optimal conditions can be dangerous, not to mention dealing with the pitch, roll and yaw of bigger ships, and their interaction with the smaller USV?s in rough seas. ?So I designed and patented a system with International Patents in 2009 for deploying, recovering and refueling at sea manned as well as unmanned boats. We?re going to have an Autonomous Re- mote Control fuel station at sea, that can loiter with the same hybrid system, that can loiter for months at a time. If you have a battleÞ eld theater where you have a lot of small boats moving around, you don?t have to go back 20 or 30 miles over the horizon to look for a fueling ship.?The envisioned ?refueling station at sea? measures 45 ft. long, with the USVs literally docking inside and via onboard sensors delivering the appropriate quan-tity of fuel. The shipboard recovery system ?comes down like a little gondola, it sits in the water along side the ship; the boat come in and it locks; and the device raises the boat like an elevator,? Murphy said. While the IDEX show this month will prove a critical litmus test for the Al Seer/5G USV collaboration, it will not fully deÞ ne the collaboration, which is intent to revolutionize the business of Unmanned Surface Vessels in military and commerical markets, domestic and abroad.?There is a requirement for the military here, right now. So the initial program was set up to ser- vice the UAE military. As it?s turned out now, requirements outside the UAE are 100 times bigger than our own country?s requirement.? Russel Bartlett, Operations Manager, Al Seer Marine, Abu Dhabi, UAE Doing Business in the Middle EastWhile having an address in the Middle East comes with a number of preconceived no- tions, doing business in the UAE is as close to a seamless ?Western? model that you will  nd. The region is booming, led primarily by the continued hunt for offshore oil and gas, but diversifying to deal with a future when the resources run dry. While the UAE is pro-busi- ness, and in fact a virtual United Nations of nationalities working together throughout the country, conducting ef cient business there can sometimes be trying, as the 5G found out.?As an example, when we were bringing over a boat from Florida, it was booked to go on a particular ship,? said Keith Henderson. ?A week before it was to be shipped, we received a call from the shipper to say that the department of defense has taken over that whole ship, therefore it will be another two weeks before it could get on the next ship. Bringing the Boomeranger (RIB) in via road freight was a challenge too, as it went from Finland to Turkey. Normally from there it would go by road through Syria. But the unrest in Syria precludes that. So it had to go from Turkey, to Port Said in Egypt, transship to another ship to bring it down through the canal around to Jeddah, and driven up to here. These are things that could not be foreseen when we started.? (Source: Google Maps) MR #2 (34-41).indd 37MR #2 (34-41).indd 372/4/2013 3:58:35 PM2/4/2013 3:58:35 PM