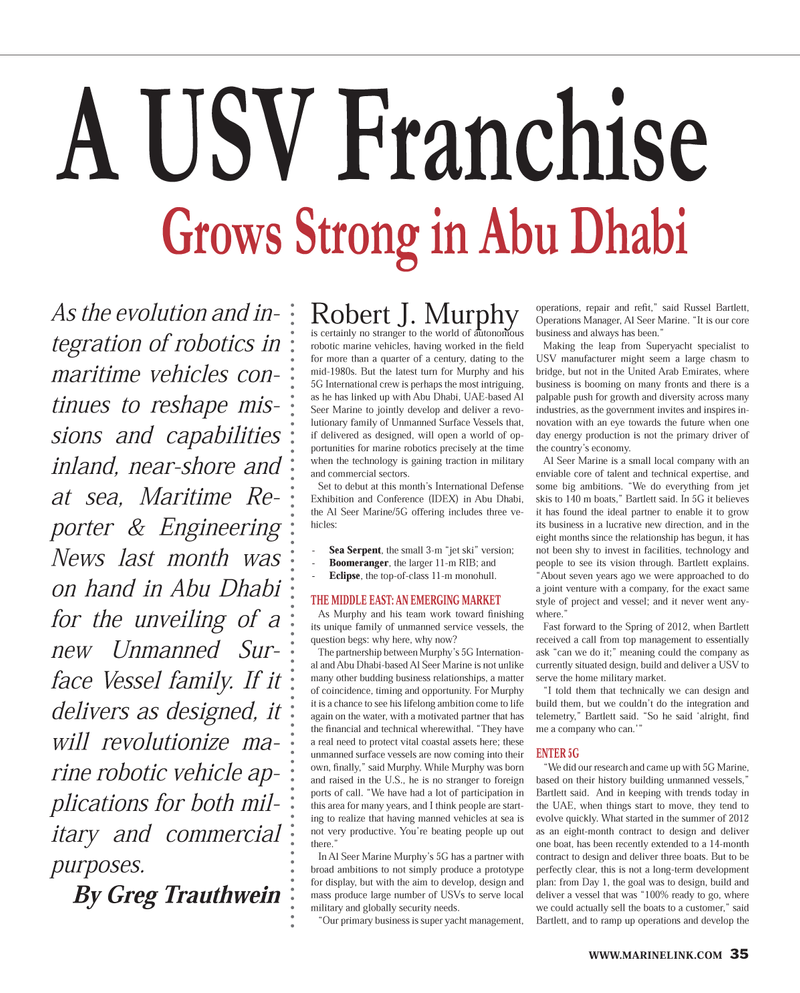 WWW.MARINELINK.COM 35Robert J. Murphy is certainly no stranger to the world of autonomous robotic marine vehicles, having worked in the Þ eld for more than a quarter of a century, dating to the mid-1980s. But the latest turn for Murphy and his 5G International crew is perhaps the most intriguing, as he has linked up with Abu Dhabi, UAE-based Al Seer Marine to jointly develop and deliver a revo-lutionary family of Unmanned Surface Vessels that, if delivered as designed, will open a world of op-portunities for marine robotics precisely at the time when the technology is gaining traction in military and commercial sectors.Set to debut at this month?s International Defense Exhibition and Conference (IDEX) in Abu Dhabi, the Al Seer Marine/5G offering includes three ve- hicles: - Sea Serpent , the small 3-m ?jet ski? version;- Boomeranger, the larger 11-m RIB; and - Eclipse, the top-of-class 11-m monohull. THE MIDDLE EAST: AN EMERGING MARKET As Murphy and his team work toward Þ nishing its unique family of unmanned service vessels, the question begs: why here, why now?The partnership between Murphy?s 5G Internation- al and Abu Dhabi-based Al Seer Marine is not unlike many other budding business relationships, a matter of coincidence, timing and opportunity. For Murphy it is a chance to see his lifelong ambition come to life again on the water, with a motivated partner that has the Þ nancial and technical wherewithal. ?They have a real need to protect vital coastal assets here; these unmanned surface vessels are now coming into their own, Þ nally,? said Murphy. While Murphy was born and raised in the U.S., he is no stranger to foreign ports of call. ?We have had a lot of participation in this area for many years, and I think people are start-ing to realize that having manned vehicles at sea is not very productive. You?re beating people up out there.?In Al Seer Marine Murphy?s 5G has a partner with broad ambitions to not simply produce a prototype for display, but with the aim to develop, design and mass produce large number of USVs to serve local military and globally security needs.?Our primary business is super yacht management, operations, repair and reÞ t,? said Russel Bartlett, Operations Manager, Al Seer Marine. ?It is our core business and always has been.?Making the leap from Superyacht specialist to USV manufacturer might seem a large chasm to bridge, but not in the United Arab Emirates, where business is booming on many fronts and there is a palpable push for growth and diversity across many industries, as the government invites and inspires in-novation with an eye towards the future when one day energy production is not the primary driver of the country?s economy. Al Seer Marine is a small local company with an enviable core of talent and technical expertise, and some big ambitions. ?We do everything from jet skis to 140 m boats,? Bartlett said. In 5G it believes it has found the ideal partner to enable it to grow its business in a lucrative new direction, and in the eight months since the relationship has begun, it has not been shy to invest in facilities, technology and people to see its vision through. Bartlett explains. ?About seven years ago we were approached to do a joint venture with a company, for the exact same style of project and vessel; and it never went any-where.?Fast forward to the Spring of 2012, when Bartlett received a call from top management to essentially ask ?can we do it;? meaning could the company as currently situated design, build and deliver a USV to serve the home military market.?I told them that technically we can design and build them, but we couldn?t do the integration and telemetry,? Bartlett said. ?So he said ?alright, Þ nd me a company who can.??ENTER 5G?We did our research and came up with 5G Marine, based on their history building unmanned vessels,? Bartlett said. And in keeping with trends today in the UAE, when things start to move, they tend to evolve quickly. What started in the summer of 2012 as an eight-month contract to design and deliver one boat, has been recently extended to a 14-month contract to design and deliver three boats. But to be perfectly clear, this is not a long-term development plan: from Day 1, the goal was to design, build and deliver a vessel that was ?100% ready to go, where we could actually sell the boats to a customer,? said Bartlett, and to ramp up operations and develop the A USV Franchise Grows Strong in Abu Dhabi As the evolution and in-tegration of robotics in maritime vehicles con-tinues to reshape mis- sions and capabilities inland, near-shore and at sea, Maritime Re-porter & Engineering News last month was on hand in Abu Dhabi for the unveiling of a new Unmanned Sur- face Vessel family. If it delivers as designed, it will revolutionize ma- rine robotic vehicle ap- plications for both mil-itary and commercial purposes. By Greg Trauthwein MR #2 (34-41).indd 35MR #2 (34-41).indd 352/1/2013 10:34:49 AM2/1/2013 10:34:49 AM