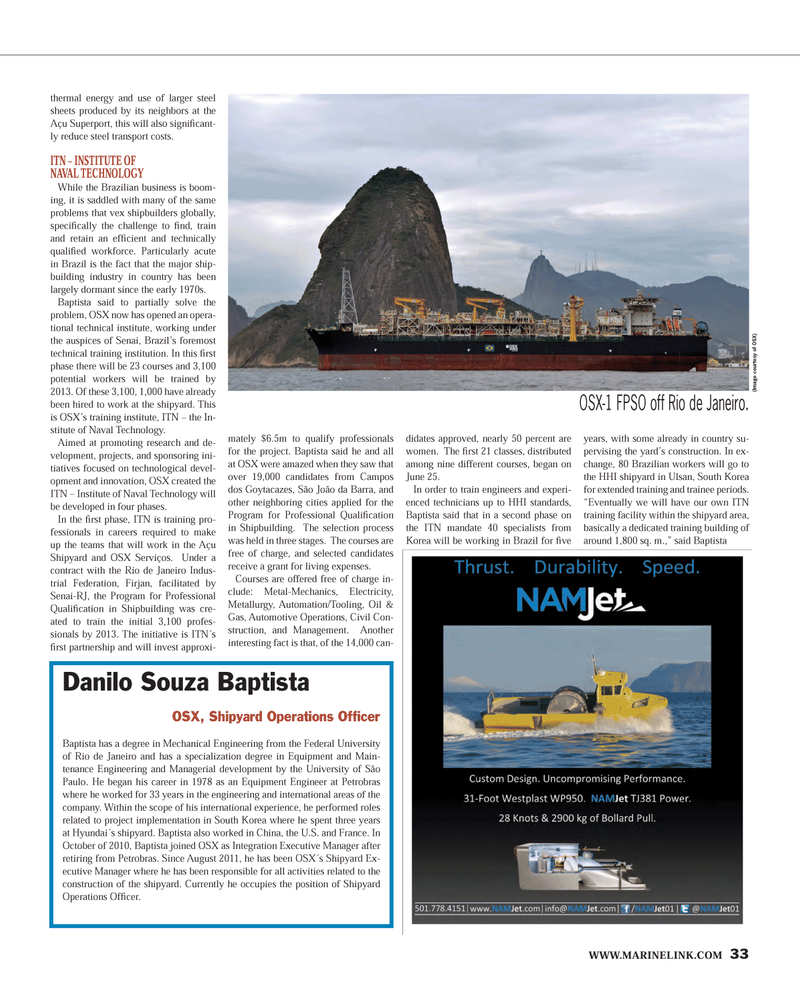 WWW.MARINELINK.COM 33thermal energy and use of larger steel sheets produced by its neighbors at the Açu Superport, this will also signiÞ cant-ly reduce steel transport costs.ITN ? INSTITUTE OF NAVAL TECHNOLOGY While the Brazilian business is boom-ing, it is saddled with many of the same problems that vex shipbuilders globally, speciÞ cally the challenge to Þ nd, train and retain an efÞ cient and technically qualiÞ ed workforce. Particularly acute in Brazil is the fact that the major ship-building industry in country has been largely dormant since the early 1970s. Baptista said to partially solve the problem, OSX now has opened an opera-tional technical institute, working under the auspices of Senai, Brazil?s foremost technical training institution. In this Þ rst phase there will be 23 courses and 3,100 potential workers will be trained by 2013. Of these 3,100, 1,000 have already been hired to work at the shipyard. This is OSX?s training institute, ITN ? the In- stitute of Naval Technology. Aimed at promoting research and de-velopment, projects, and sponsoring ini-tiatives focused on technological devel-opment and innovation, OSX created the ITN ? Institute of Naval Technology will be developed in four phases.In the Þ rst phase, ITN is training pro- fessionals in careers required to make up the teams that will work in the Açu Shipyard and OSX Serviços. Under a contract with the Rio de Janeiro Indus-trial Federation, Firjan, facilitated by Senai-RJ, the Program for Professional QualiÞ cation in Shipbuilding was cre- ated to train the initial 3,100 profes-sionals by 2013. The initiative is ITN´s Þ rst partnership and will invest approxi-mately $6.5m to qualify professionals for the project. Baptista said he and all at OSX were amazed when they saw that over 19,000 candidates from Campos dos Goytacazes, São João da Barra, and other neighboring cities applied for the Program for Professional QualiÞ cation in Shipbuilding. The selection process was held in three stages. The courses are free of charge, and selected candidates receive a grant for living expenses.Courses are offered free of charge in- clude: Metal-Mechanics, Electricity, Metallurgy, Automation/Tooling, Oil & Gas, Automotive Operations, Civil Con- struction, and Management. Another interesting fact is that, of the 14,000 can-didates approved, nearly 50 percent are women. The Þ rst 21 classes, distributed among nine different courses, began on June 25.In order to train engineers and experi-enced technicians up to HHI standards, Baptista said that in a second phase on the ITN mandate 40 specialists from Korea will be working in Brazil for Þ ve years, with some already in country su-pervising the yard?s construction. In ex- change, 80 Brazilian workers will go to the HHI shipyard in Ulsan, South Korea for extended training and trainee periods. ?Eventually we will have our own ITN training facility within the shipyard area, basically a dedicated training building of around 1,800 sq. m.,? said BaptistaDanilo Souza Baptista OSX, Shipyard Operations OfÞ cerBaptista has a degree in Mechanical Engineering from the Federal University of Rio de Janeiro and has a specialization degree in Equipment and Main-tenance Engineering and Managerial development by the University of São Paulo. He began his career in 1978 as an Equipment Engineer at Petrobras where he worked for 33 years in the engineering and international areas of the company. Within the scope of his international experience, he performed roles related to project implementation in South Korea where he spent three years at Hyundai´s shipyard. Baptista also worked in China, the U.S. and France. In October of 2010, Baptista joined OSX as Integration Executive Manager after retiring from Petrobras. Since August 2011, he has been OSX´s Shipyard Ex- ecutive Manager where he has been responsible for all activities related to the construction of the shipyard. Currently he occupies the position of Shipyard Operations OfÞ cer. OSX-1 FPSO off Rio de Janeiro. (Image courtesy of OSX) MR #2 (26-33).indd 33MR #2 (26-33).indd 332/1/2013 10:18:13 AM2/1/2013 10:18:13 AM