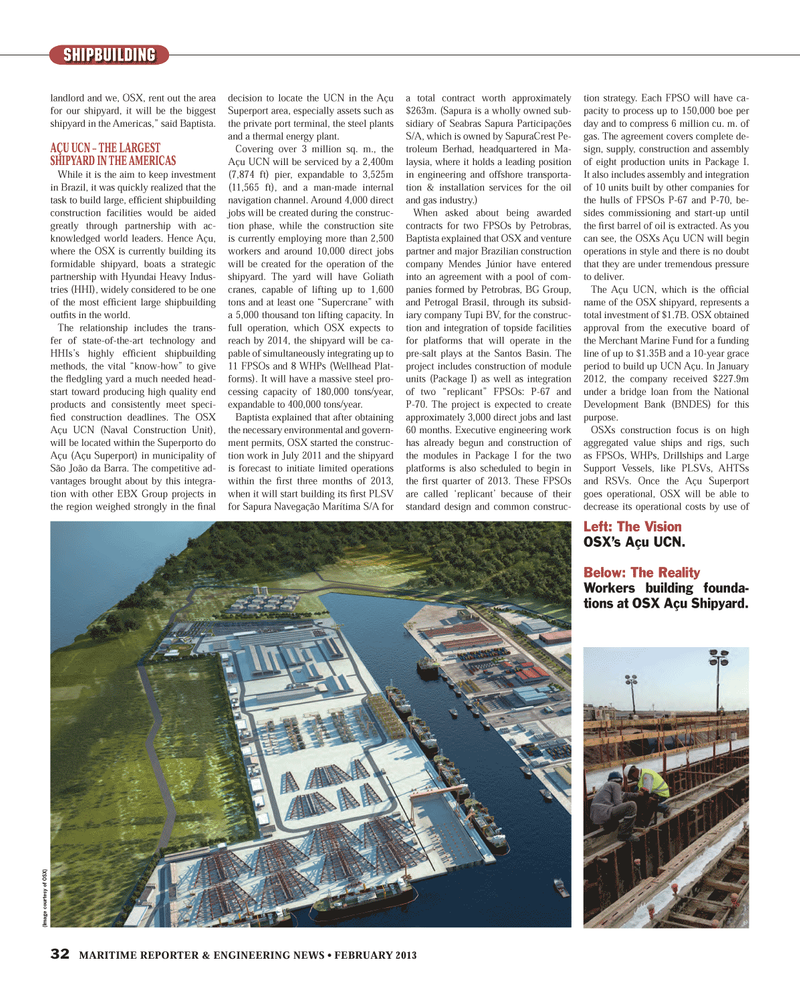 32 MARITIME REPORTER & ENGINEERING NEWS ? FEBRUARY 2013 SHIPBUILDINGlandlord and we, OSX, rent out the area for our shipyard, it will be the biggest shipyard in the Americas,? said Baptista. AÇU UCN ? THE LARGEST SHIPYARD IN THE AMERICAS While it is the aim to keep investment in Brazil, it was quickly realized that the task to build large, ef Þ cient shipbuilding construction facilities would be aided greatly through partnership with ac-knowledged world leaders. Hence Açu, where the OSX is currently building its formidable shipyard, boats a strategic partnership with Hyundai Heavy Indus-tries (HHI), widely considered to be one of the most efÞ cient large shipbuilding outÞ ts in the world. The relationship includes the trans-fer of state-of-the-art technology and HHIs?s highly ef Þ cient shipbuilding methods, the vital ?know-how? to give the ß edgling yard a much needed head- start toward producing high quality end products and consistently meet speci-Þ ed construction deadlines. The OSX Açu UCN (Naval Construction Unit), will be located within the Superporto do Açu (Açu Superport) in municipality of São João da Barra. The competitive ad- vantages brought about by this integra-tion with other EBX Group projects in the region weighed strongly in the Þ nal decision to locate the UCN in the Açu Superport area, especially assets such as the private port terminal, the steel plants and a thermal energy plant. Covering over 3 million sq. m., the Açu UCN will be serviced by a 2,400m (7,874 ft) pier, expandable to 3,525m (11,565 ft), and a man-made internal navigation channel. Around 4,000 direct jobs will be created during the construc-tion phase, while the construction site is currently employing more than 2,500 workers and around 10,000 direct jobs will be created for the operation of the shipyard. The yard will have Goliath cranes, capable of lifting up to 1,600 tons and at least one ?Supercrane? with a 5,000 thousand ton lifting capacity. In full operation, which OSX expects to reach by 2014, the shipyard will be ca-pable of simultaneously integrating up to 11 FPSOs and 8 WHPs (Wellhead Plat- forms). It will have a massive steel pro-cessing capacity of 180,000 tons/year, expandable to 400,000 tons/year. Baptista explained that after obtaining the necessary environmental and govern-ment permits, OSX started the construc-tion work in July 2011 and the shipyard is forecast to initiate limited operations within the Þ rst three months of 2013, when it will start building its Þ rst PLSV for Sapura Navegação Marítima S/A for a total contract worth approximately $263m. (Sapura is a wholly owned sub-sidiary of Seabras Sapura Participações S/A, which is owned by SapuraCrest Pe-troleum Berhad, headquartered in Ma-laysia, where it holds a leading position in engineering and offshore transporta- tion & installation services for the oil and gas industry.) When asked about being awarded contracts for two FPSOs by Petrobras, Baptista explained that OSX and venture partner and major Brazilian construction company Mendes Júnior have entered into an agreement with a pool of com-panies formed by Petrobras, BG Group, and Petrogal Brasil, through its subsid-iary company Tupi BV, for the construc- tion and integration of topside facilities for platforms that will operate in the pre-salt plays at the Santos Basin. The project includes construction of module units (Package I) as well as integration of two ?replicant? FPSOs: P-67 and P-70. The project is expected to create approximately 3,000 direct jobs and last 60 months. Executive engineering work has already begun and construction of the modules in Package I for the two platforms is also scheduled to begin in the Þ rst quarter of 2013. These FPSOs are called ?replicant? because of their standard design and common construc-tion strategy. Each FPSO will have ca- pacity to process up to 150,000 boe per day and to compress 6 million cu. m. of gas. The agreement covers complete de- sign, supply, construction and assembly of eight production units in Package I. It also includes assembly and integration of 10 units built by other companies for the hulls of FPSOs P-67 and P-70, be-sides commissioning and start-up until the Þ rst barrel of oil is extracted. As you can see, the OSXs Açu UCN will begin operations in style and there is no doubt that they are under tremendous pressure to deliver. The Açu UCN, which is the of Þ cial name of the OSX shipyard, represents a total investment of $1.7B. OSX obtained approval from the executive board of the Merchant Marine Fund for a funding line of up to $1.35B and a 10-year grace period to build up UCN Açu. In January 2012, the company received $227.9m under a bridge loan from the National Development Bank (BNDES) for this purpose.OSXs construction focus is on high aggregated value ships and rigs, such as FPSOs, WHPs, Drillships and Large Support Vessels, like PLSVs, AHTSs and RSVs. Once the Açu Superport goes operational, OSX will be able to decrease its operational costs by use of Left: The Vision OSX?s Açu UCN. Below: The RealityWorkers building founda- tions at OSX Açu Shipyard.(Image courtesy of OSX) MR #2 (26-33).indd 32MR #2 (26-33).indd 322/1/2013 10:20:12 AM2/1/2013 10:20:12 AM