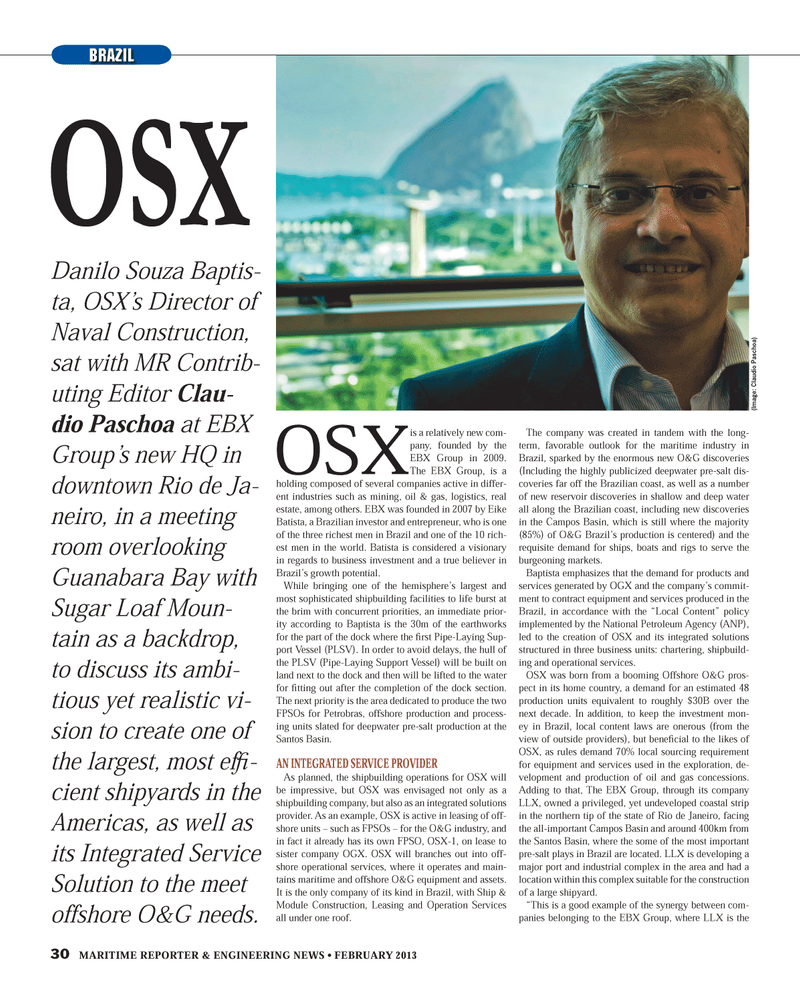 30 MARITIME REPORTER & ENGINEERING NEWS ? FEBRUARY 2013 OSX is a relatively new com-pany, founded by the EBX Group in 2009. The EBX Group, is a holding composed of several companies active in differ- ent industries such as mining, oil & gas, logistics, real estate, among others. EBX was founded in 2007 by Eike Batista, a Brazilian investor and entrepreneur, who is one of the three richest men in Brazil and one of the 10 rich-est men in the world. Batista is considered a visionary in regards to business investment and a true believer in Brazil?s growth potential. While bringing one of the hemisphere?s largest and most sophisticated shipbuilding facilities to life burst at the brim with concurrent priorities, an immediate prior- ity according to Baptista is the 30m of the earthworks for the part of the dock where the Þ rst Pipe-Laying Sup- port Vessel (PLSV). In order to avoid delays, the hull of the PLSV (Pipe-Laying Support Vessel) will be built on land next to the dock and then will be lifted to the water for Þ tting out after the completion of the dock section. The next priority is the area dedicated to produce the two FPSOs for Petrobras, offshore production and process- ing units slated for deepwater pre-salt production at the Santos Basin.AN INTEGRATED SERVICE PROVIDER As planned, the shipbuilding operations for OSX will be impressive, but OSX was envisaged not only as a shipbuilding company, but also as an integrated solutions provider. As an example, OSX is active in leasing of off- shore units ? such as FPSOs ? for the O&G industry, and in fact it already has its own FPSO, OSX-1, on lease to sister company OGX. OSX will branches out into off- shore operational services, where it operates and main-tains maritime and offshore O&G equipment and assets. It is the only company of its kind in Brazil, with Ship & Module Construction, Leasing and Operation Services all under one roof. The company was created in tandem with the long-term, favorable outlook for the maritime industry in Brazil, sparked by the enormous new O&G discoveries (Including the highly publicized deepwater pre-salt dis-coveries far off the Brazilian coast, as well as a number of new reservoir discoveries in shallow and deep water all along the Brazilian coast, including new discoveries in the Campos Basin, which is still where the majority (85%) of O&G Brazil?s production is centered) and the requisite demand for ships, boats and rigs to serve the burgeoning markets. Baptista emphasizes that the demand for products and services generated by OGX and the company?s commit- ment to contract equipment and services produced in the Brazil, in accordance with the ?Local Content? policy implemented by the National Petroleum Agency (ANP), led to the creation of OSX and its integrated solutions structured in three business units: chartering, shipbuild-ing and operational services.OSX was born from a booming Offshore O&G pros- pect in its home country, a demand for an estimated 48 production units equivalent to roughly $30B over the next decade. In addition, to keep the investment mon-ey in Brazil, local content laws are onerous (from the view of outside providers), but beneÞ cial to the likes of OSX, as rules demand 70% local sourcing requirement for equipment and services used in the exploration, de-velopment and production of oil and gas concessions. Adding to that, The EBX Group, through its company LLX, owned a privileged, yet undeveloped coastal strip in the northern tip of the state of Rio de Janeiro, facing the all-important Campos Basin and around 400km from the Santos Basin, where the some of the most important pre-salt plays in Brazil are located. LLX is developing a major port and industrial complex in the area and had a location within this complex suitable for the construction of a large shipyard. ?This is a good example of the synergy between com- panies belonging to the EBX Group, where LLX is the BRAZILOSXDanilo Souza Baptis-ta, OSX?s Director of Naval Construction, sat with MR Contrib-uting Editor Clau-dio Paschoa at EBX Group?s new HQ in downtown Rio de Ja-neiro, in a meeting room overlooking Guanabara Bay with Sugar Loaf Moun-tain as a backdrop, to discuss its ambi-tious yet realistic vi- sion to create one of the largest, most ef Þ -cient shipyards in the Americas, as well as its Integrated Service Solution to the meet offshore O&G needs. (Image: Claudio Paschoa)MR #2 (26-33).indd 30MR #2 (26-33).indd 302/1/2013 10:17:11 AM2/1/2013 10:17:11 AM