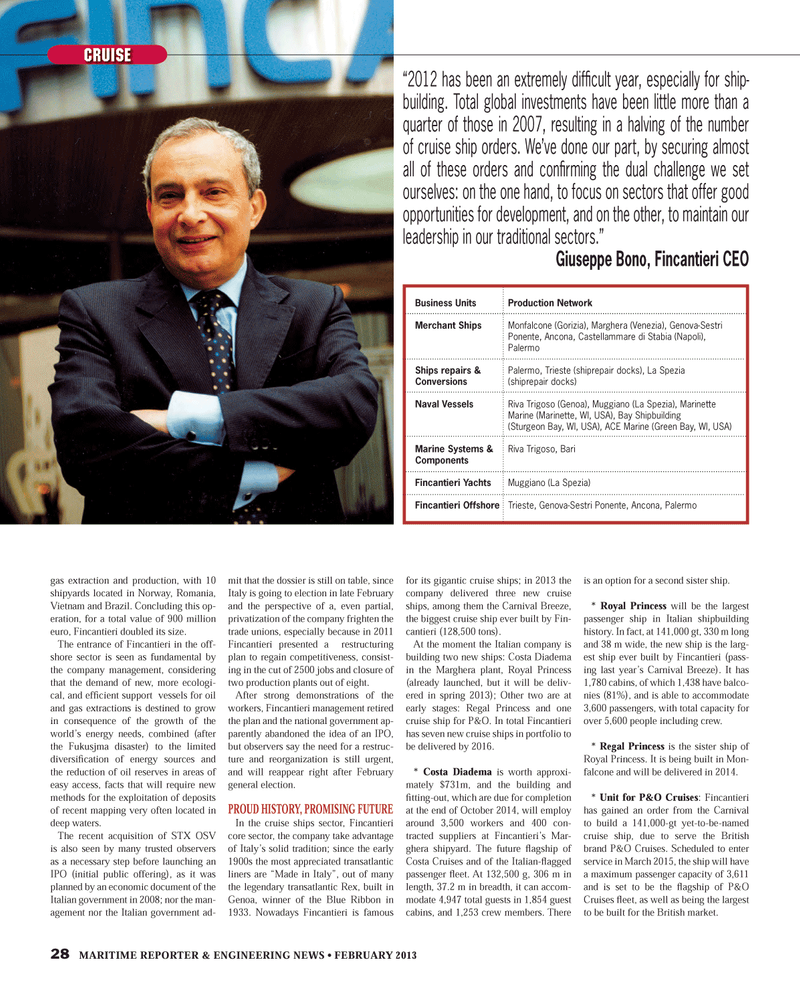 28 MARITIME REPORTER & ENGINEERING NEWS ? FEBRUARY 2013 CRUISEgas extraction and production, with 10 shipyards located in Norway, Romania, Vietnam and Brazil. Concluding this op- eration, for a total value of 900 million euro, Fincantieri doubled its size.The entrance of Fincantieri in the off- shore sector is seen as fundamental by the company management, considering that the demand of new, more ecologi- cal, and efÞ cient support vessels for oil and gas extractions is destined to grow in consequence of the growth of the world?s energy needs, combined (after the Fukusjma disaster) to the limited diversiÞ cation of energy sources and the reduction of oil reserves in areas of easy access, facts that will require new methods for the exploitation of deposits of recent mapping very often located in deep waters.The recent acquisition of STX OSV is also seen by many trusted observers as a necessary step before launching an IPO (initial public offering), as it was planned by an economic document of the Italian government in 2008; nor the man-agement nor the Italian government ad-mit that the dossier is still on table, since Italy is going to election in late February and the perspective of a, even partial, privatization of the company frighten the trade unions, especially because in 2011 Fincantieri presented a restructuring plan to regain competitiveness, consist-ing in the cut of 2500 jobs and closure of two production plants out of eight. After strong demonstrations of the workers, Fincantieri management retired the plan and the national government ap-parently abandoned the idea of an IPO, but observers say the need for a restruc-ture and reorganization is still urgent, and will reappear right after February general election. PROUD HISTORY, PROMISING FUTURE In the cruise ships sector, Fincantieri core sector, the company take advantage of Italy?s solid tradition; since the early 1900s the most appreciated transatlantic liners are ?Made in Italy?, out of many the legendary transatlantic Rex, built in Genoa, winner of the Blue Ribbon in 1933. Nowadays Fincantieri is famous for its gigantic cruise ships; in 2013 the company delivered three new cruise ships, among them the Carnival Breeze, the biggest cruise ship ever built by Fin-cantieri (128,500 tons).At the moment the Italian company is building two new ships: Costa Diadema in the Marghera plant, Royal Princess (already launched, but it will be deliv-ered in spring 2013); Other two are at early stages: Regal Princess and one cruise ship for P&O. In total Fincantieri has seven new cruise ships in portfolio to be delivered by 2016.* Costa Diadema is worth approxi-mately $731m, and the building and Þ tting-out, which are due for completion at the end of October 2014, will employ around 3,500 workers and 400 con-tracted suppliers at Fincantieri?s Mar- ghera shipyard. The future ß agship of Costa Cruises and of the Italian-ß agged passenger ß eet. At 132,500 g, 306 m in length, 37.2 m in breadth, it can accom-modate 4,947 total guests in 1,854 guest cabins, and 1,253 crew members. There is an option for a second sister ship.* Royal Princess will be the largest passenger ship in Italian shipbuilding history. In fact, at 141,000 gt, 330 m long and 38 m wide, the new ship is the larg- est ship ever built by Fincantieri (pass-ing last year?s Carnival Breeze). It has 1,780 cabins, of which 1,438 have balco-nies (81%), and is able to accommodate 3,600 passengers, with total capacity for over 5,600 people including crew. * Regal Princess is the sister ship of Royal Princess. It is being built in Mon-falcone and will be delivered in 2014.* Unit for P&O Cruises : Fincantieri has gained an order from the Carnival to build a 141,000-gt yet-to-be-named cruise ship, due to serve the British brand P&O Cruises. Scheduled to enter service in March 2015, the ship will have a maximum passenger capacity of 3,611 and is set to be the ß agship of P&O Cruises ß eet, as well as being the largest to be built for the British market.Business Units Production Network Merchant Ships Monfalcone (Gorizia), Marghera (Venezia), Genova-Sestri Ponente, Ancona, Castellammare di Stabia (Napoli), PalermoShips repairs & Palermo, Trieste (shiprepair docks), La Spezia Conversions (shiprepair docks) Naval Vessels Riva Trigoso (Genoa), Muggiano (La Spezia), Marinette Marine (Marinette, WI, USA), Bay Shipbuilding (Sturgeon Bay, WI, USA), ACE Marine (Green Bay, WI, USA) Marine Systems & Riva Trigoso, Bari Components Fincantieri Yachts Muggiano (La Spezia) Fincantieri Offshore Trieste, Genova-Sestri Ponente, Ancona, Palermo ?2012 has been an extremely dif cult year, especially for ship- building. Total global investments have been little more than a quarter of those in 2007, resulting in a halving of the number of cruise ship orders. We?ve done our part, by securing almost all of these orders and con rming the dual challenge we set ourselves: on the one hand, to focus on sectors that offer good opportunities for development, and on the other, to maintain our leadership in our traditional sectors.?Giuseppe Bono, Fincantieri CEO MR #2 (26-33).indd 28MR #2 (26-33).indd 282/1/2013 10:16:32 AM2/1/2013 10:16:32 AM