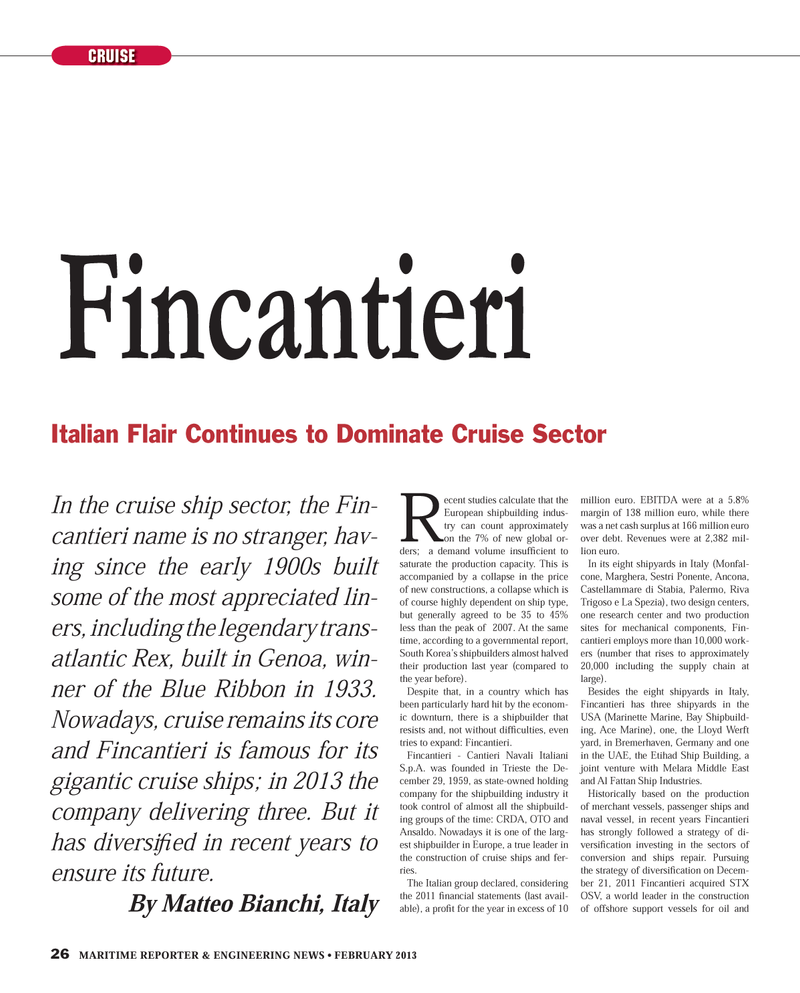 26 MARITIME REPORTER & ENGINEERING NEWS ? FEBRUARY 2013 CRUISEFincantieriItalian Flair Continues to Dominate Cruise SectorRecent studies calculate that the European shipbuilding indus-try can count approximately on the 7% of new global or- ders; a demand volume insufÞ cient to saturate the production capacity. This is accompanied by a collapse in the price of new constructions, a collapse which is of course highly dependent on ship type, but generally agreed to be 35 to 45% less than the peak of 2007. At the same time, according to a governmental report, South Korea?s shipbuilders almost halved their production last year (compared to the year before).Despite that, in a country which has been particularly hard hit by the econom-ic downturn, there is a shipbuilder that resists and, not without difÞ culties, even tries to expand: Fincantieri.Fincantieri - Cantieri Navali Italiani S.p.A. was founded in Trieste the De- cember 29, 1959, as state-owned holding company for the shipbuilding industry it took control of almost all the shipbuild-ing groups of the time: CRDA, OTO and Ansaldo. Nowadays it is one of the larg- est shipbuilder in Europe, a true leader in the construction of cruise ships and fer- ries.The Italian group declared, considering the 2011 Þ nancial statements (last avail- able), a proÞ t for the year in excess of 10 million euro. EBITDA were at a 5.8% margin of 138 million euro, while there was a net cash surplus at 166 million euro over debt. Revenues were at 2,382 mil-lion euro.In its eight shipyards in Italy (Monfal-cone, Marghera, Sestri Ponente, Ancona, Castellammare di Stabia, Palermo, Riva Trigoso e La Spezia), two design centers, one research center and two production sites for mechanical components, Fin-cantieri employs more than 10,000 work-ers (number that rises to approximately 20,000 including the supply chain at large). Besides the eight shipyards in Italy, Fincantieri has three shipyards in the USA (Marinette Marine, Bay Shipbuild- ing, Ace Marine), one, the Lloyd Werft yard, in Bremerhaven, Germany and one in the UAE, the Etihad Ship Building, a joint venture with Melara Middle East and Al Fattan Ship Industries. Historically based on the production of merchant vessels, passenger ships and naval vessel, in recent years Fincantieri has strongly followed a strategy of di-versiÞ cation investing in the sectors of conversion and ships repair. Pursuing the strategy of diversiÞ cation on Decem-ber 21, 2011 Fincantieri acquired STX OSV, a world leader in the construction of offshore support vessels for oil and In the cruise ship sector, the Fin- cantieri name is no stranger, hav- ing since the early 1900s built some of the most appreciated lin- ers, including the legendary trans-atlantic Rex, built in Genoa, win-ner of the Blue Ribbon in 1933. Nowadays, cruise remains its core and Fincantieri is famous for its gigantic cruise ships; in 2013 the company delivering three. But it has diversiÞ ed in recent years to ensure its future. By Matteo Bianchi, ItalyMR #2 (26-33).indd 26MR #2 (26-33).indd 262/1/2013 10:15:26 AM2/1/2013 10:15:26 AM