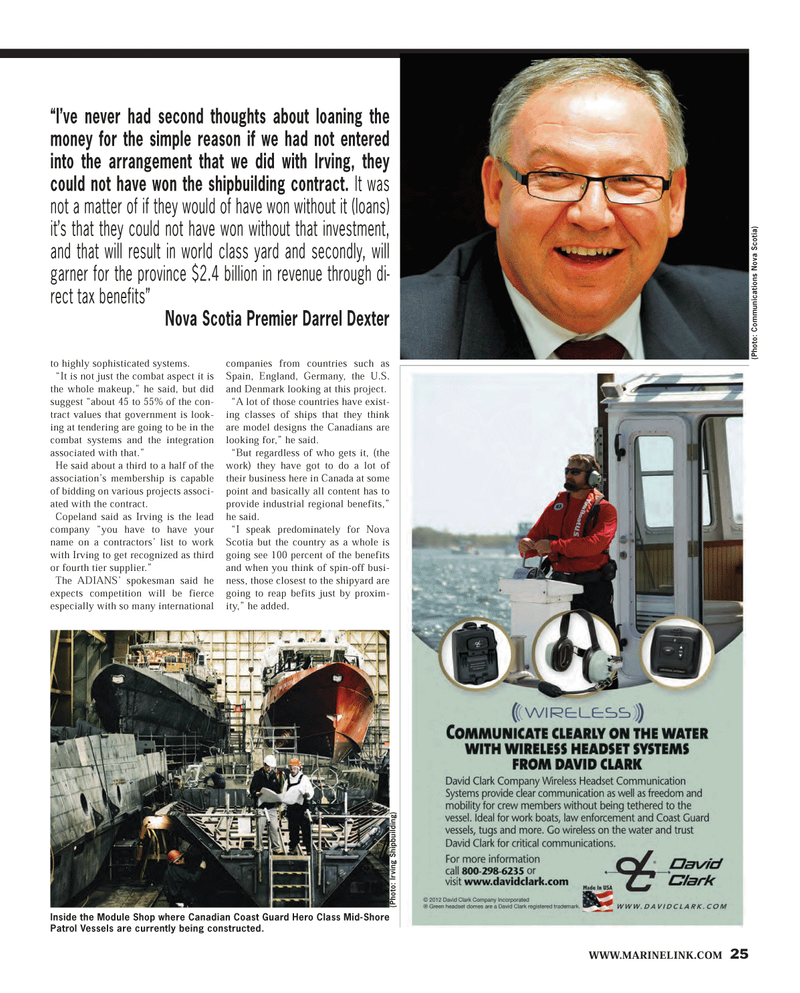 WWW.MARINELINK.COM 25to highly sophisticated systems.?It is not just the combat aspect it is the whole makeup,? he said, but did suggest ?about 45 to 55% of the con-tract values that government is look-ing at tendering are going to be in the combat systems and the integration associated with that.?He said about a third to a half of the association?s membership is capable of bidding on various projects associ-ated with the contract.Copeland said as Irving is the lead company ?you have to have your name on a contractors? list to work with Irving to get recognized as third or fourth tier supplier.? The ADIANS? spokesman said he expects competition will be fierce especially with so many international companies from countries such as Spain, England, Germany, the U.S. and Denmark looking at this project.?A lot of those countries have exist- ing classes of ships that they think are model designs the Canadians are looking for,? he said. ?But regardless of who gets it, (the work) they have got to do a lot of their business here in Canada at some point and basically all content has to provide industrial regional benefits,? he said.?I speak predominately for Nova Scotia but the country as a whole is going see 100 percent of the benefits and when you think of spin-off busi- ness, those closest to the shipyard are going to reap befits just by proxim-ity,? he added. Inside the Module Shop where Canadian Coast Guard Hero Class Mid-Shore Patrol Vessels are currently being constructed. (Photo: Irving Shipbuilding) ?I?ve never had second thoughts about loaning the money for the simple reason if we had not entered into the arrangement that we did with Irving, they could not have won the shipbuilding contract. It was not a matter of if they would of have won without it (loans) it?s that they could not have won without that investment, and that will result in world class yard and secondly, will garner for the province $2.4 billion in revenue through di- rect tax benefits? Nova Scotia Premier Darrel Dexter (Photo: Communications Nova Scotia)MR #2 (18-25).indd 25MR #2 (18-25).indd 252/1/2013 9:51:22 AM2/1/2013 9:51:22 AM