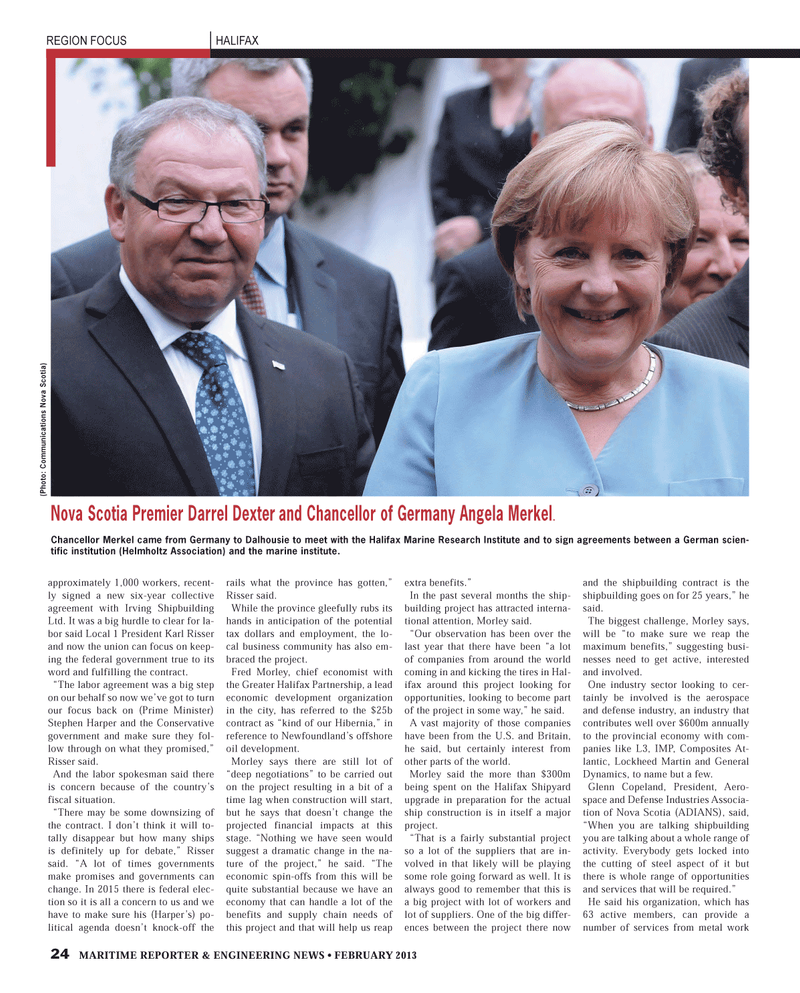 24 MARITIME REPORTER & ENGINEERING NEWS ? FEBRUARY 2013 approximately 1,000 workers, recent-ly signed a new six-year collective agreement with Irving Shipbuilding Ltd. It was a big hurdle to clear for la-bor said Local 1 President Karl Risser and now the union can focus on keep-ing the federal government true to its word and fulfilling the contract.?The labor agreement was a big step on our behalf so now we?ve got to turn our focus back on (Prime Minister) Stephen Harper and the Conservative government and make sure they fol-low through on what they promised,? Risser said.And the labor spokesman said there is concern because of the country?s fiscal situation.?There may be some downsizing of the contract. I don?t think it will to- tally disappear but how many ships is definitely up for debate,? Risser said. ?A lot of times governments make promises and governments can change. In 2015 there is federal elec-tion so it is all a concern to us and we have to make sure his (Harper?s) po- litical agenda doesn?t knock-off the rails what the province has gotten,? Risser said.While the province gleefully rubs its hands in anticipation of the potential tax dollars and employment, the lo-cal business community has also em-braced the project. Fred Morley, chief economist with the Greater Halifax Partnership, a lead economic development organization in the city, has referred to the $25b contract as ?kind of our Hibernia,? in reference to Newfoundland?s offshore oil development.Morley says there are still lot of ?deep negotiations? to be carried out on the project resulting in a bit of a time lag when construction will start, but he says that doesn?t change the projected financial impacts at this stage. ?Nothing we have seen would suggest a dramatic change in the na-ture of the project,? he said. ?The economic spin-offs from this will be quite substantial because we have an economy that can handle a lot of the benefits and supply chain needs of this project and that will help us reap extra benefits.?In the past several months the ship-building project has attracted interna-tional attention, Morley said.?Our observation has been over the last year that there have been ?a lot of companies from around the world coming in and kicking the tires in Hal-ifax around this project looking for opportunities, looking to become part of the project in some way,? he said. A vast majority of those companies have been from the U.S. and Britain, he said, but certainly interest from other parts of the world.Morley said the more than $300m being spent on the Halifax Shipyard upgrade in preparation for the actual ship construction is in itself a major project.?That is a fairly substantial project so a lot of the suppliers that are in-volved in that likely will be playing some role going forward as well. It is always good to remember that this is a big project with lot of workers and lot of suppliers. One of the big differ- ences between the project there now and the shipbuilding contract is the shipbuilding goes on for 25 years,? he said.The biggest challenge, Morley says, will be ?to make sure we reap the maximum benefits,? suggesting busi-nesses need to get active, interested and involved.One industry sector looking to cer- tainly be involved is the aerospace and defense industry, an industry that contributes well over $600m annually to the provincial economy with com-panies like L3, IMP, Composites At- lantic, Lockheed Martin and General Dynamics, to name but a few. Glenn Copeland, President, Aero- space and Defense Industries Associa- tion of Nova Scotia (ADIANS), said, ?When you are talking shipbuilding you are talking about a whole range of activity. Everybody gets locked into the cutting of steel aspect of it but there is whole range of opportunities and services that will be required.?He said his organization, which has 63 active members, can provide a number of services from metal work REGION FOCUSHALIFAX Nova Scotia Premier Darrel Dexter and Chancellor of Germany Angela Merkel. Chancellor Merkel came from Germany to Dalhousie to meet with the Halifax Marine Research Institute and to sign agreements between a German scien- tific institution (Helmholtz Association) and the marine institute.(Photo: Communications Nova Scotia)MR #2 (18-25).indd 24MR #2 (18-25).indd 242/1/2013 9:49:03 AM2/1/2013 9:49:03 AM