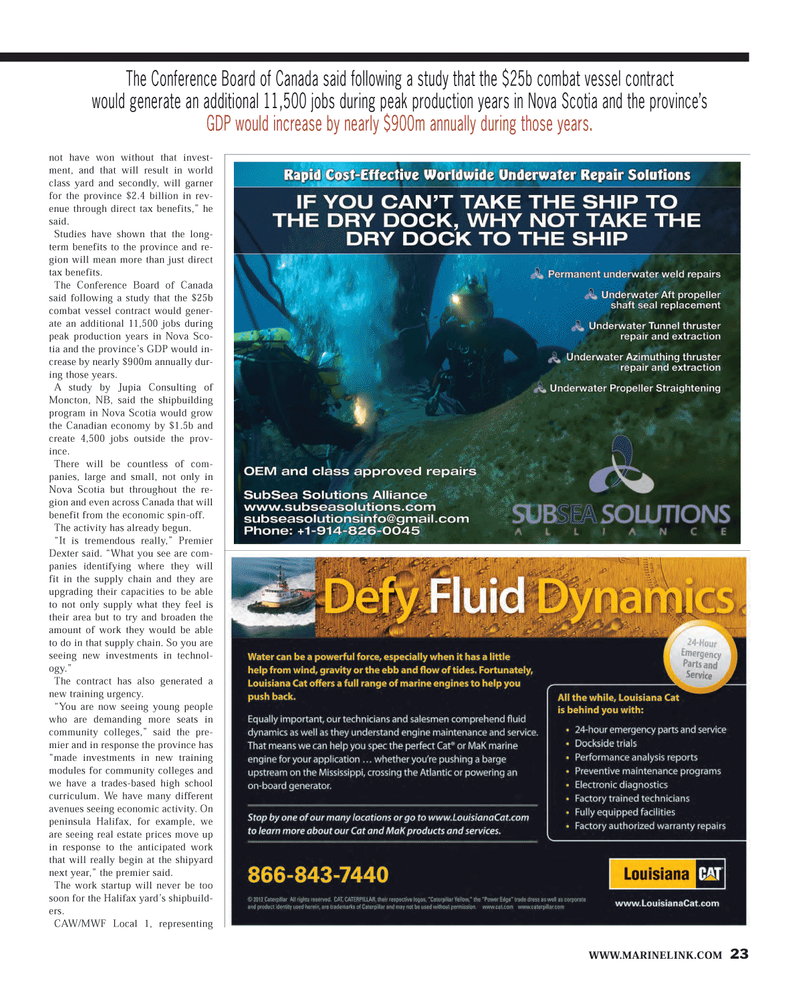 WWW.MARINELINK.COM 23not have won without that invest-ment, and that will result in world class yard and secondly, will garner for the province $2.4 billion in rev-enue through direct tax benefits,? he said.Studies have shown that the long-term benefits to the province and re-gion will mean more than just direct tax benefits.The Conference Board of Canada said following a study that the $25b combat vessel contract would gener- ate an additional 11,500 jobs during peak production years in Nova Sco-tia and the province?s GDP would in- crease by nearly $900m annually dur- ing those years.A study by Jupia Consulting of Moncton, NB, said the shipbuilding program in Nova Scotia would grow the Canadian economy by $1.5b and create 4,500 jobs outside the prov-ince.There will be countless of com-panies, large and small, not only in Nova Scotia but throughout the re-gion and even across Canada that will benefit from the economic spin-off. The activity has already begun.?It is tremendous really,? Premier Dexter said. ?What you see are com-panies identifying where they will fit in the supply chain and they are upgrading their capacities to be able to not only supply what they feel is their area but to try and broaden the amount of work they would be able to do in that supply chain. So you are seeing new investments in technol-ogy.? The contract has also generated a new training urgency. ?You are now seeing young people who are demanding more seats in community colleges,? said the pre-mier and in response the province has ?made investments in new training modules for community colleges and we have a trades-based high school curriculum. We have many different avenues seeing economic activity. On peninsula Halifax, for example, we are seeing real estate prices move up in response to the anticipated work that will really begin at the shipyard next year,? the premier said. The work startup will never be too soon for the Halifax yard?s shipbuild- ers.CAW/MWF Local 1, representing The Conference Board of Canada said following a study that the $25b combat vessel contract would generate an additional 11,500 jobs during peak production years in Nova Scotia and the province?s GDP would increase by nearly $900m annually during those years. MR #2 (18-25).indd 23MR #2 (18-25).indd 232/1/2013 9:48:41 AM2/1/2013 9:48:41 AM