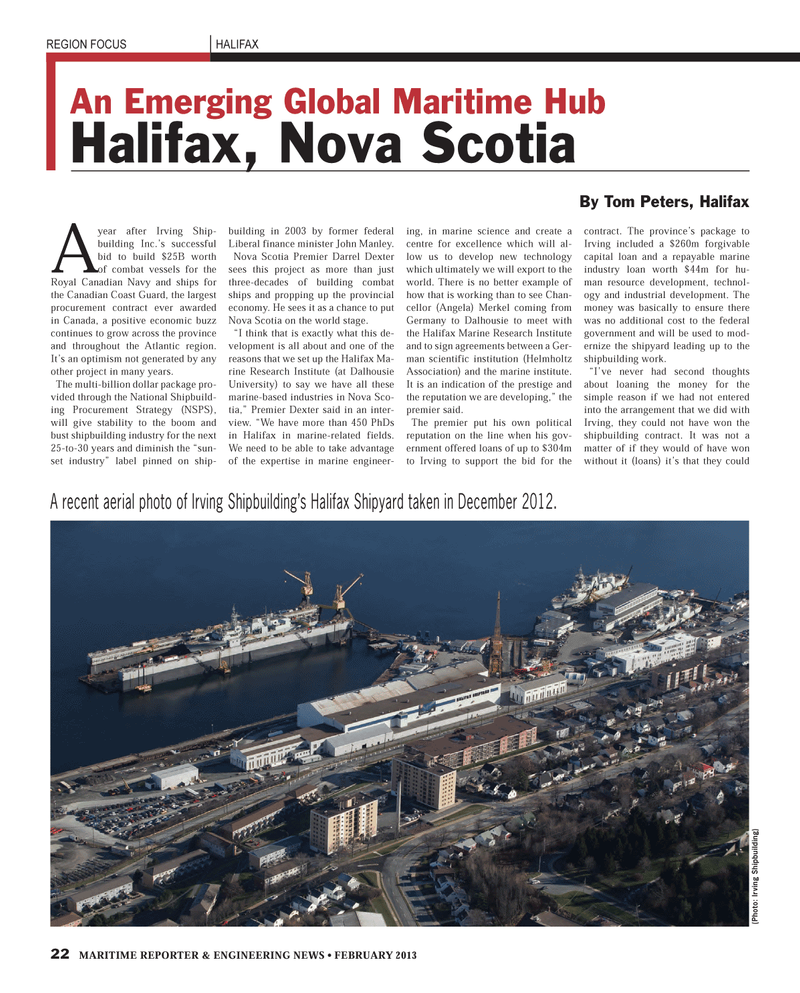 A year after Irving Ship-building Inc.?s successful bid to build $25B worth of combat vessels for the Royal Canadian Navy and ships for the Canadian Coast Guard, the largest procurement contract ever awarded in Canada, a positive economic buzz continues to grow across the province and throughout the Atlantic region. It?s an optimism not generated by any other project in many years.The multi-billion dollar package pro-vided through the National Shipbuild-ing Procurement Strategy (NSPS), will give stability to the boom and bust shipbuilding industry for the next 25-to-30 years and diminish the ?sun-set industry? label pinned on ship-building in 2003 by former federal Liberal finance minister John Manley. Nova Scotia Premier Darrel Dexter sees this project as more than just three-decades of building combat ships and propping up the provincial economy. He sees it as a chance to put Nova Scotia on the world stage.?I think that is exactly what this de-velopment is all about and one of the reasons that we set up the Halifax Ma-rine Research Institute (at Dalhousie University) to say we have all these marine-based industries in Nova Sco-tia,? Premier Dexter said in an inter- view. ?We have more than 450 PhDs in Halifax in marine-related fields. We need to be able to take advantage of the expertise in marine engineer- ing, in marine science and create a centre for excellence which will al-low us to develop new technology which ultimately we will export to the world. There is no better example of how that is working than to see Chan-cellor (Angela) Merkel coming from Germany to Dalhousie to meet with the Halifax Marine Research Institute and to sign agreements between a Ger- man scientific institution (Helmholtz Association) and the marine institute. It is an indication of the prestige and the reputation we are developing,? the premier said. The premier put his own political reputation on the line when his gov-ernment offered loans of up to $304m to Irving to support the bid for the contract. The province?s package to Irving included a $260m forgivable capital loan and a repayable marine industry loan worth $44m for hu-man resource development, technol-ogy and industrial development. The money was basically to ensure there was no additional cost to the federal government and will be used to mod-ernize the shipyard leading up to the shipbuilding work.?I?ve never had second thoughts about loaning the money for the simple reason if we had not entered into the arrangement that we did with Irving, they could not have won the shipbuilding contract. It was not a matter of if they would of have won without it (loans) it?s that they could REGION FOCUSHALIFAX An Emerging Global Maritime Hub Halifax, Nova Scotia22 MARITIME REPORTER & ENGINEERING NEWS ? FEBRUARY 2013 A recent aerial photo of Irving Shipbuilding?s Halifax Shipyard taken in December 2012. (Photo: Irving Shipbuilding) By Tom Peters, Halifax MR #2 (18-25).indd 22MR #2 (18-25).indd 222/1/2013 9:48:25 AM2/1/2013 9:48:25 AM