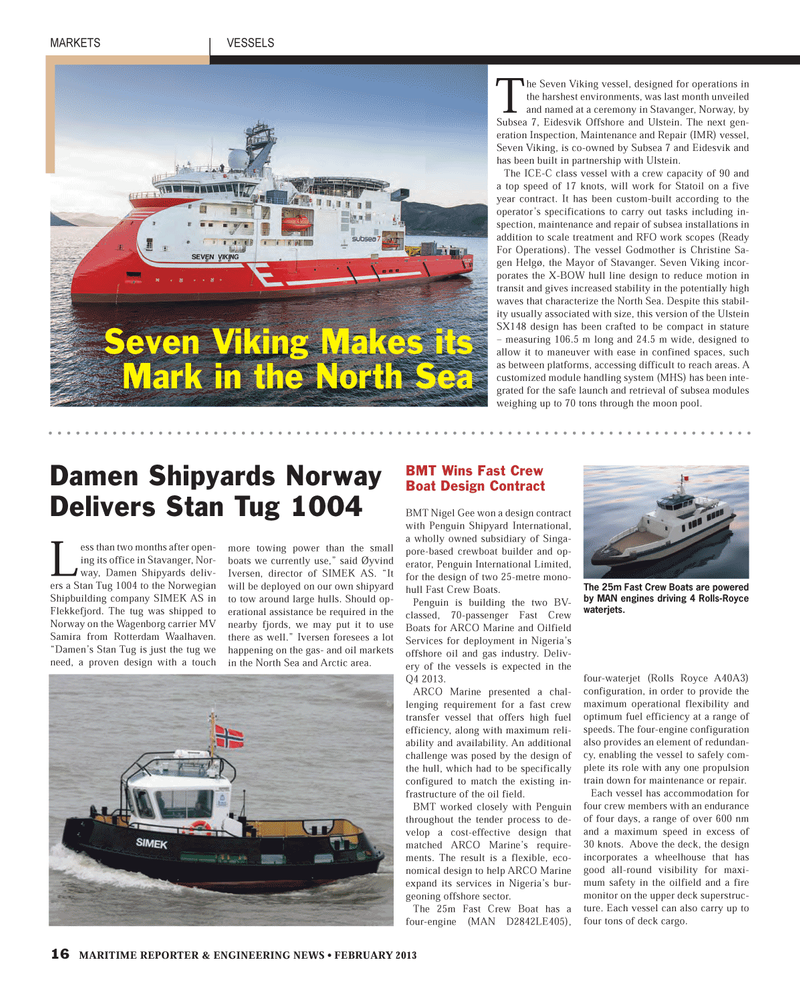 16 MARITIME REPORTER & ENGINEERING NEWS ? FEBRUARY 2013 The Seven Viking vessel, designed for operations in the harshest environments, was last month unveiled and named at a ceremony in Stavanger, Norway, by Subsea 7, Eidesvik Offshore and Ulstein. The next gen- eration Inspection, Maintenance and Repair (IMR) vessel, Seven Viking, is co-owned by Subsea 7 and Eidesvik and has been built in partnership with Ulstein.The ICE-C class vessel with a crew capacity of 90 and a top speed of 17 knots, will work for Statoil on a five year contract. It has been custom-built according to the operator?s specifications to carry out tasks including in- spection, maintenance and repair of subsea installations in addition to scale treatment and RFO work scopes (Ready For Operations). The vessel Godmother is Christine Sa- gen Helgø, the Mayor of Stavanger. Seven Viking incor- porates the X-BOW hull line design to reduce motion in transit and gives increased stability in the potentially high waves that characterize the North Sea. Despite this stabil-ity usually associated with size, this version of the Ulstein SX148 design has been crafted to be compact in stature ? measuring 106.5 m long and 24.5 m wide, designed to allow it to maneuver with ease in confined spaces, such as between platforms, accessing difficult to reach areas. A customized module handling system (MHS) has been inte-grated for the safe launch and retrieval of subsea modules weighing up to 70 tons through the moon pool. MARKETS VESSELSSeven Viking Makes its Mark in the North SeaLess than two months after open-ing its office in Stavanger, Nor- way, Damen Shipyards deliv- ers a Stan Tug 1004 to the Norwegian Shipbuilding company SIMEK AS in Flekkefjord. The tug was shipped to Norway on the Wagenborg carrier MV Samira from Rotterdam Waalhaven. ?Damen?s Stan Tug is just the tug we need, a proven design with a touch more towing power than the small boats we currently use,? said Øyvind Iversen, director of SIMEK AS. ?It will be deployed on our own shipyard to tow around large hulls. Should op- erational assistance be required in the nearby fjords, we may put it to use there as well.? Iversen foresees a lot happening on the gas- and oil markets in the North Sea and Arctic area. BMT Wins Fast Crew Boat Design ContractBMT Nigel Gee won a design contract with Penguin Shipyard International, a wholly owned subsidiary of Singa-pore-based crewboat builder and op-erator, Penguin International Limited, for the design of two 25-metre mono-hull Fast Crew Boats.Penguin is building the two BV- classed, 70-passenger Fast Crew Boats for ARCO Marine and Oilfield Services for deployment in Nigeria?s offshore oil and gas industry. Deliv- ery of the vessels is expected in the Q4 2013.ARCO Marine presented a chal-lenging requirement for a fast crew transfer vessel that offers high fuel efficiency, along with maximum reli- ability and availability. An additional challenge was posed by the design of the hull, which had to be specifically configured to match the existing in-frastructure of the oil field. BMT worked closely with Penguin throughout the tender process to de-velop a cost-effective design that matched ARCO Marine?s require- ments. The result is a flexible, eco- nomical design to help ARCO Marine expand its services in Nigeria?s bur- geoning offshore sector. The 25m Fast Crew Boat has a four-engine (MAN D2842LE405), four-waterjet (Rolls Royce A40A3) configuration, in order to provide the maximum operational flexibility and optimum fuel efficiency at a range of speeds. The four-engine configuration also provides an element of redundan-cy, enabling the vessel to safely com- plete its role with any one propulsion train down for maintenance or repair. Each vessel has accommodation for four crew members with an endurance of four days, a range of over 600 nm and a maximum speed in excess of 30 knots. Above the deck, the design incorporates a wheelhouse that has good all-round visibility for maxi-mum safety in the oilfield and a fire monitor on the upper deck superstruc-ture. Each vessel can also carry up to four tons of deck cargo. Damen Shipyards Norway Delivers Stan Tug 1004 The 25m Fast Crew Boats are powered by MAN engines driving 4 Rolls-Royce waterjets.MR #2 (10-17).indd 16MR #2 (10-17).indd 162/4/2013 10:21:14 AM2/4/2013 10:21:14 AM