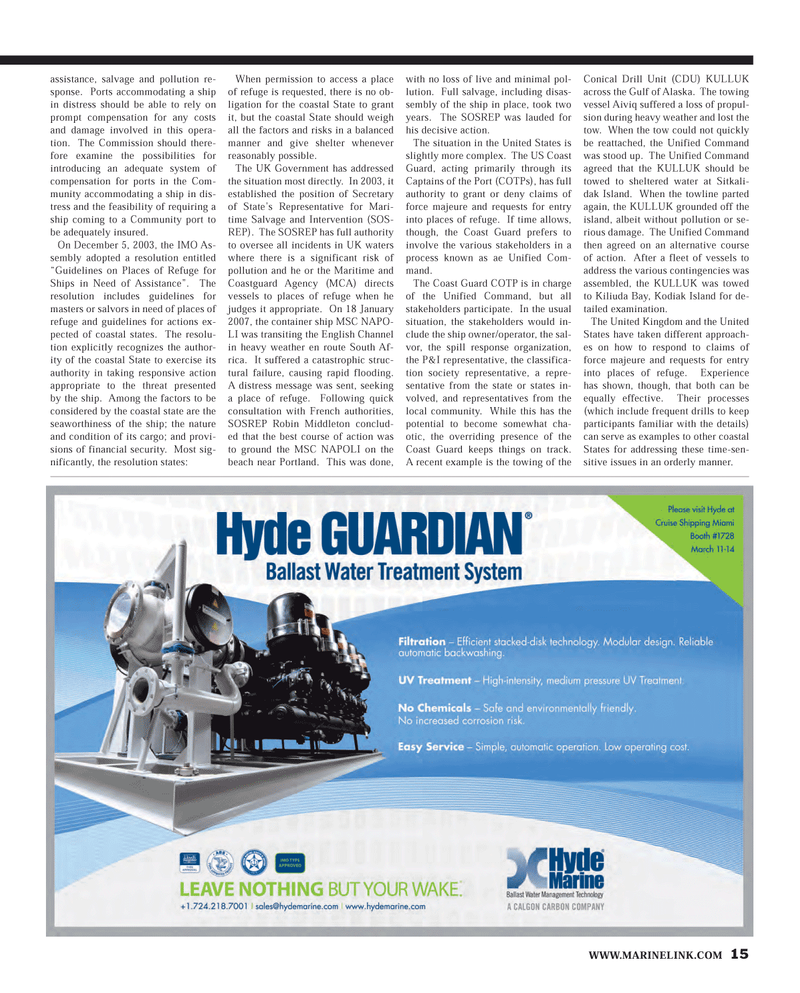 WWW.MARINELINK.COM 15assistance, salvage and pollution re-sponse. Ports accommodating a ship in distress should be able to rely on prompt compensation for any costs and damage involved in this opera-tion. The Commission should there- fore examine the possibilities for introducing an adequate system of compensation for ports in the Com-munity accommodating a ship in dis-tress and the feasibility of requiring a ship coming to a Community port to be adequately insured.On December 5, 2003, the IMO As- sembly adopted a resolution entitled ?Guidelines on Places of Refuge for Ships in Need of Assistance?. The resolution includes guidelines for masters or salvors in need of places of refuge and guidelines for actions ex-pected of coastal states. The resolu- tion explicitly recognizes the author- ity of the coastal State to exercise its authority in taking responsive action appropriate to the threat presented by the ship. Among the factors to be considered by the coastal state are the seaworthiness of the ship; the nature and condition of its cargo; and provi- sions of financial security. Most sig- nificantly, the resolution states: When permission to access a place of refuge is requested, there is no ob-ligation for the coastal State to grant it, but the coastal State should weigh all the factors and risks in a balanced manner and give shelter whenever reasonably possible.The UK Government has addressed the situation most directly. In 2003, it established the position of Secretary of State?s Representative for Mari- time Salvage and Intervention (SOS-REP). The SOSREP has full authority to oversee all incidents in UK waters where there is a significant risk of pollution and he or the Maritime and Coastguard Agency (MCA) directs vessels to places of refuge when he judges it appropriate. On 18 January 2007, the container ship MSC NAPO-LI was transiting the English Channel in heavy weather en route South Af- rica. It suffered a catastrophic struc- tural failure, causing rapid flooding. A distress message was sent, seeking a place of refuge. Following quick consultation with French authorities, SOSREP Robin Middleton conclud- ed that the best course of action was to ground the MSC NAPOLI on the beach near Portland. This was done, with no loss of live and minimal pol-lution. Full salvage, including disas-sembly of the ship in place, took two years. The SOSREP was lauded for his decisive action.The situation in the United States is slightly more complex. The US Coast Guard, acting primarily through its Captains of the Port (COTPs), has full authority to grant or deny claims of force majeure and requests for entry into places of refuge. If time allows, though, the Coast Guard prefers to involve the various stakeholders in a process known as ae Unified Com-mand. The Coast Guard COTP is in charge of the Unified Command, but all stakeholders participate. In the usual situation, the stakeholders would in-clude the ship owner/operator, the sal- vor, the spill response organization, the P&I representative, the classifica-tion society representative, a repre-sentative from the state or states in-volved, and representatives from the local community. While this has the potential to become somewhat cha-otic, the overriding presence of the Coast Guard keeps things on track. A recent example is the towing of the Conical Drill Unit (CDU) KULLUK across the Gulf of Alaska. The towing vessel Aiviq suffered a loss of propul- sion during heavy weather and lost the tow. When the tow could not quickly be reattached, the Unified Command was stood up. The Unified Command agreed that the KULLUK should be towed to sheltered water at Sitkali-dak Island. When the towline parted again, the KULLUK grounded off the island, albeit without pollution or se-rious damage. The Unified Command then agreed on an alternative course of action. After a fleet of vessels to address the various contingencies was assembled, the KULLUK was towed to Kiliuda Bay, Kodiak Island for de- tailed examination. The United Kingdom and the United States have taken different approach- es on how to respond to claims of force majeure and requests for entry into places of refuge. Experience has shown, though, that both can be equally effective. Their processes (which include frequent drills to keep participants familiar with the details) can serve as examples to other coastal States for addressing these time-sen-sitive issues in an orderly manner. MR #2 (10-17).indd 15MR #2 (10-17).indd 152/1/2013 9:30:07 AM2/1/2013 9:30:07 AM