As ship owners globally face the eventual mandate to install ballast water management technology onboard their ships – a refit which is touted as the most expensive equipment refit ever – Maritime  Reporter & Engineering News in its February 2013 edition examines emerging Ballast Water Technologies for consideration.


Wärtsilä said its AQUARIUS UV Ballast Water Management System (BWMS) was granted Type Approval in accordance with requirements of the 2004 IMO Convention for the control and management of ships ballast water and sediments.  AQUARIUS UV BWMS is reportedly the first system to have been fully endorsed and type approved by the Flag Administration of the Netherlands and is the result of a focused development program which commenced in 2010. The AQUARIUS range became part of the Wärtsilä portfolio with the acquisition of Hamworthy plc in January 2012.
AQUARIUS UV BWMS is based on a two-stage treatment process. Upon uptake, seawater is first passed through a back washing screen type filter. The filtered seawater then passes through a UV chamber where ultra-violet light is used to disinfect the water before entering the ballast tank. On discharge, water from the ballast tank is pumped through the UV chamber for a second time to complete the disinfection process prior to discharge. The filter is not used during discharge.
Working in partnership with the Netherlands' Flag Administration, independent testing facilities and Lloyds Register, Wärtsilä tested and optimized the AQUARIUS UV BWMS during both land based and shipboard trials conducted in accordance with IMO requirements. Land based tests were conducted at the NIOZ (Royal Netherlands Institute for Sea Research) test facility and ship trials onboard the 'MV TWISTER', an LPG carrier owned by Chemgas BV.
www.wartsila.com

(As published in the February 2013 edition of Maritime Reporter & Engineering News - www.marinelink.com) 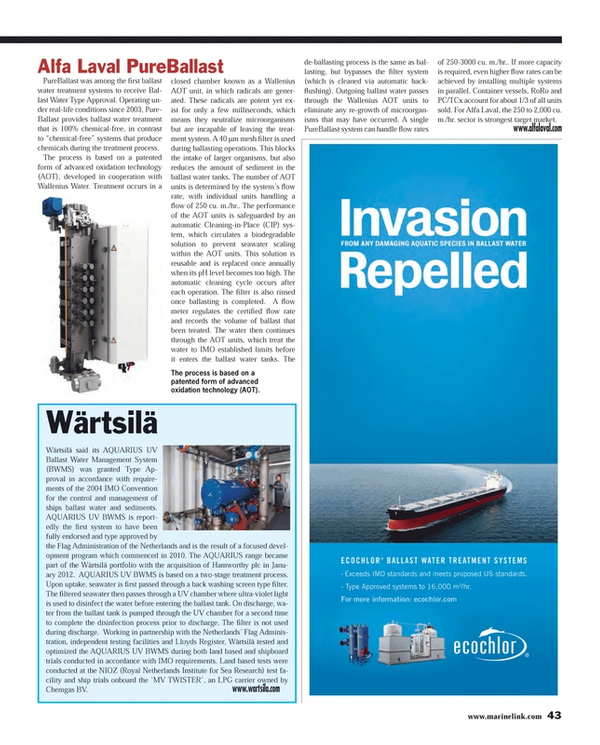