As ship owners globally face the eventual mandate to install ballast water management technology onboard their ships – a refit which is touted as the most expensive equipment refit ever – Maritime  Reporter & Engineering News in its February 2013 edition examines emerging Ballast Water Technologies for consideration.


Ecochlor, Inc. received Product Design Assessment (PDA) Approval from ABS for its full range of ballast water treatment systems (BWTS), systems that have the capacity to treat ballast water flow rates of up to 16,000 cu. m./hr.
Prior to ABS PDA Approval, the Ecochlor BWTS received IMO G9 Final Approval in September 2010. The Ecochlor BWTS has IMO Type Approval from Germany (BSH), as well as Type Approvals from the Liberian Administration.  Ecochlor’s technology was one of the first accepted into the Shipboard Technology Evaluation Program (STEP), and its application for approval as an Alternative Management System (AMS) under the recently published guidelines by the USCG has been submitted and the expectation is to be one of the first commercial systems to obtain that approval.
Ten consecutive test cycles on land and aboard ship over a two-year period resulted in no surviving organisms after treatment. With testing results of all zeros, it proved that the system could meet or exceed proposed US requirements of at least 10X IMO standards. This completed the international approvals of all of Ecochlor’s Systems and confirms that they fully comply with the 2004 IMO International Convention for the Control and Management of Ship’s Ballast Water and Sediments.
Ecochlor holds a unique position in the shipping industry as using patented chlorine dioxide (ClO2) treatment technology for ballast water. There is an exclusive distribution agreement with EKA Chemicals (part of the Akzo Nobel group of companies) for the EKA ClO2 generation technology for use in the marine and shipboard environment.
The Ecochlor BWTS uses a two-step process to treat ballast water – filtration followed by disinfection with the biocide chlorine dioxide. The system’s effectiveness reportedly is not impaired by variations in salinity, temperature, turbidity, organics, and vibration, which can impact other treatment options. Key system advantages are touted as small size, low power, and low maintenance characteristics.
www.ecochlor.com

(As published in the February 2013 edition of Maritime Reporter & Engineering News - www.marinelink.com) 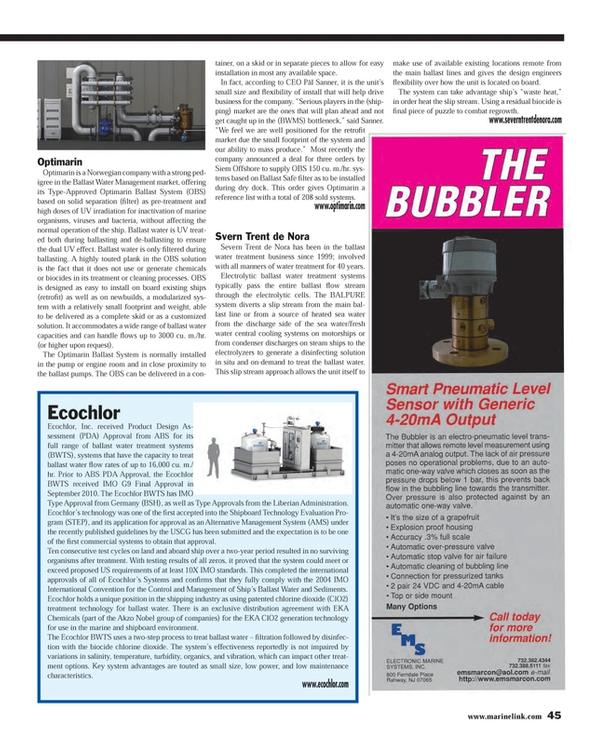