IMO has issued advice to port state control officers that, for a period of six months after the February 1, 2002 implementation deadline for the revised Convention on Standards of Training, Certification and Watchkeeping for Seafarers (STCW 95), ships whose officers do not hold STCW 95 certificates or flag state endorsements need not be detained.

The move comes in recognition of the fact that many seafarers have not yet been able to obtain the necessary certification required by the convention and that Parties to the convention have had difficulties in concluding the arrangements required to process reciprocal recognition endorsements. In a circular letter issued by the 33rd Sub Committee on Standards of Training and Watchkeeping (STW), it is recommended that, until July 31, 2002, port state control officers issue only a warning in cases where a seafarer's documentation complies with the requirements immediately before February 1, 2002 but is not in accordance with the requirements of STCW 95. Port State control officers are recommended to issue the warnings to the shipping companies concerned only and to notify the seafarers and inform the flag State accordingly.

Many delegations expressed their disappointment at the measure, but there was agreement that it in no way altered the implementation date of the Convention and was simply a pragmatic response to what had become a lengthy administrative process. The Sub-Committee was particularly concerned and regretted the fact that, so close to the end of the transitional period, seafarers were reportedly unable to obtain STCW 95 certificates and/or the necessary flag State endorsements required by regulation 1/10.

However, it was recognized that the 1995 amendments had introduced radical changes to the STCW Convention and that these had been a significant factor in the delay.

The sub-committee also recognized that major ISM Code non-conformities could be raised if a seafarer's documentation is not in accordance with STCW 95. It therefore recommended that flag States should inform recognized organizations responsible for issuing ISM Code certificates that, until July 31, 2002, it would be sufficient to inform the flag State of such cases when assessing compliance with the ISM Code. Certificate- issuing parties and flag administrations were urged by the sub-committee to do their utmost to ensure that seafarers are issued with the appropriate certificates and necessary endorsements with the minimum of delay. 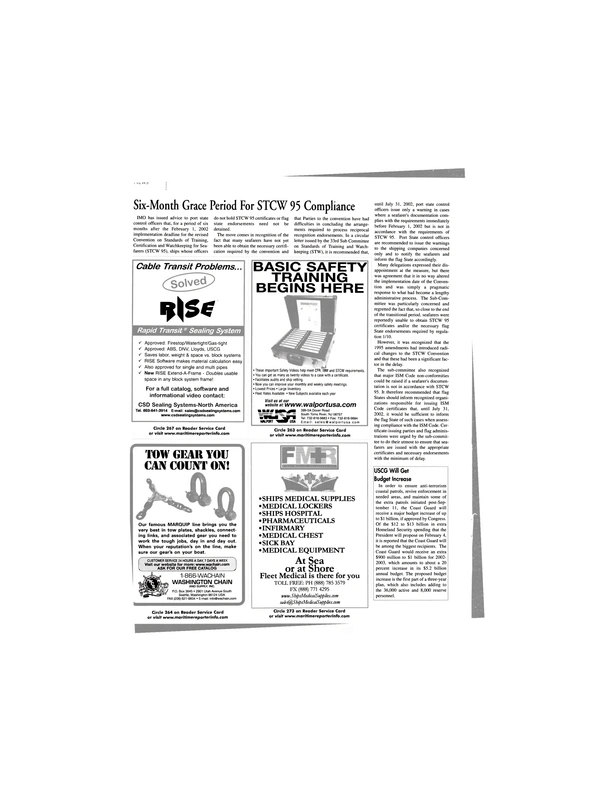