Still more than five months later, the maritime industry continues to feel the effects from the terrorist attacks on America, as the events of September 11 have accelerated hardening market conditions in the marine sector. Prior to September, capital providers were beginning to force the upward trend of the cycle. This trend was underpinned with some withdrawal of capacity and reduction in the overall number of players through mergers or withdrawal from the class.

Much of the recent aviation war losses (Air Lanka and WTC) are to be paid by the marine war market in which they were underwritten. It is therefore unsurprising to see a strong impact on the appetite and rating of marine war business.

Annual marine hull war rates have moved from, typically 0.01 percent to 0.02 per cent prior to September 11 to 0.04 percent to 0.05 percent, irrespective of where the vessels trade, although even harsher rating has been imposed in the cruise vessel sector.

At the same time, the trading warranties have been amended to exclude a wide range of destinations in respect of which additional premiums are charged.

There is, however, a competitive market developing in war business. We anticipate that even the best fleets will attract some level of increase as the market contracts. These same conditions are expected to apply to the marine liability market as reinsurance costs and limited capacity drive rating levels upwards.

With the main protection and indemnity (P&I) renewal date being February 20, the main focus of concern has been in connection with the P&I Clubs' stance on war risks. The P&I Club market has explicitly stated that P&I war cover offered by them is only in excess of any underlying war P&l cover, bought with the hull insurance, or in excess of the hull insurance value, whichever is the greater.

However, the combination of anticipated increases in reinsurance cost, together with reduced investment income has led to a hardening in the general increases that will be charged at renewal. Prior to the events of September 11, such increases were being predicted in the range of 10 percent to 15 percent; the range is now 20 percent to 30 percent. The perceived deterioration in the political situation in certain parts of the world since September 11 has resulted in a revised war risks rating schedule for marine cargo risks. The practical application of these war rates has translated into general premium increases for cargo owners, depending on the destination of their goods.

Additionally, where composite rates had previously been charged, underwriters have now called for these to reflect the additional cost of war/strikes coverage.

Also, the reductions in capacity over the past few weeks have contributed further to the general upward cycle. In the principal marine markets outside London, the situation is much the same. While some of these markets such as Norway, will not have been directly affected by the events of September 11, there has still been hardening of rates combined with some uncertainty as to what capacity will be available at January 1, 2002 Source: Willis Group Holdings, 7 Hanover Square, New York, NY 10004. 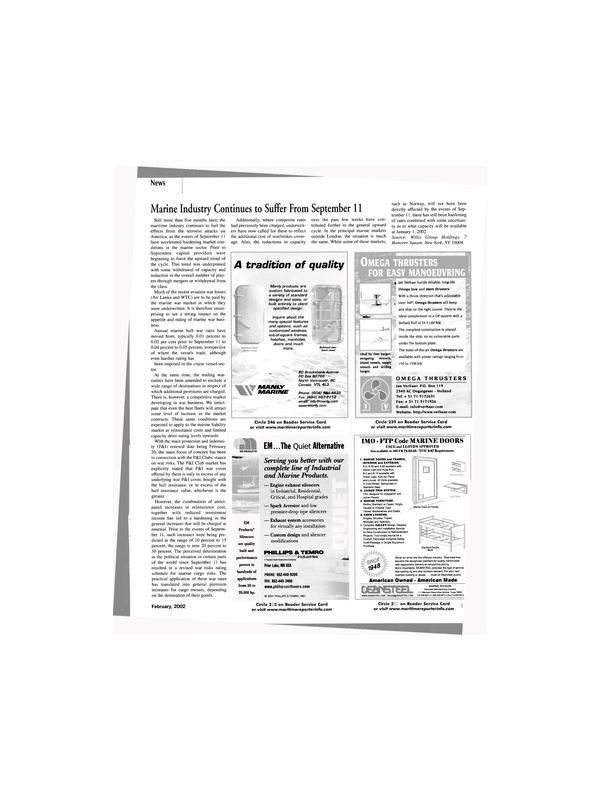