Total container capacity supply by ocean carriers on the three main east/west shipping trades rose by an average of five percent in 2001 despite the recent attempts of several carriers to remove excess capacity, according to a report released this week by ComPair Data Inc., a global ocean shipping research and information technology firm based in Jacksonville, Fla.

Several ocean carriers in the transpacific and Asia/Europe routes made capacity cut-backs in the last three months of 2001. according to the January 2002 World Liner Supply report from ComPair Data, leading to an average lpercent reduction in east/west capacity. But those reductions did not outweigh the addition of substantial new vessel capacity early last year or the ongoing expansion of other carriers, which led to the overall annual capacity increase.

Results of the January 2002 World Liner Supply report show that transpacific shipping lines have expanded capacity by three percent between January 2001 and January 2002. Transpacific capacity currently amounts to over 196.000 TEUs a week (equivalent to a yearly one-way capacity of 10.2 million TEUs), down six percent from the corresponding figures in October 2001. but up from capacity offered in January 2001. "Capacity growth has slowed down, but there are still concerns about a further rise in over-capacity in the major trades," said Hayes H. Howard, president of ComPair Data.

"Intermediaries, shippers and carriers are now carefully watching the competitive pressures and vessel delivery and layup trends that are driving overcapacity, as this will have a major impact on the bottom lines of their providers and, ultimately, their own companies," he added. In the Asia/northern Europe/Mediterranean trade, ocean carriers continued to add capacity in 2001, reaching a total one-way capacity of about 143,000 TEUs a week (equivalent to 7.4 million TEUs a year) at the beginning of January. The report does not incorporate changes in capacity due to be implemented by carriers during January and February.

The alliances that have added the most capacity during the last 12 months are: the COSCO/"K" Line/Yang Ming alliance in the Asia/Europe trade (+35 percent) and transpacific trade (+18 percent); the Evergreen/Lloyd Triestino group in the transpacific (+20 percent); the New World Alliance (APL, Hyundai and MOL) in the Asia/Europe trade (+21 percent); and Mediterranean Shipping Co. in the transatlantic (+7 percent).

These are just some of the highlights from the latest World Liner Supply report, which tracks capacity, service and partnership changes for all liner carriers and their ships operating on 12 major trades worldwide. 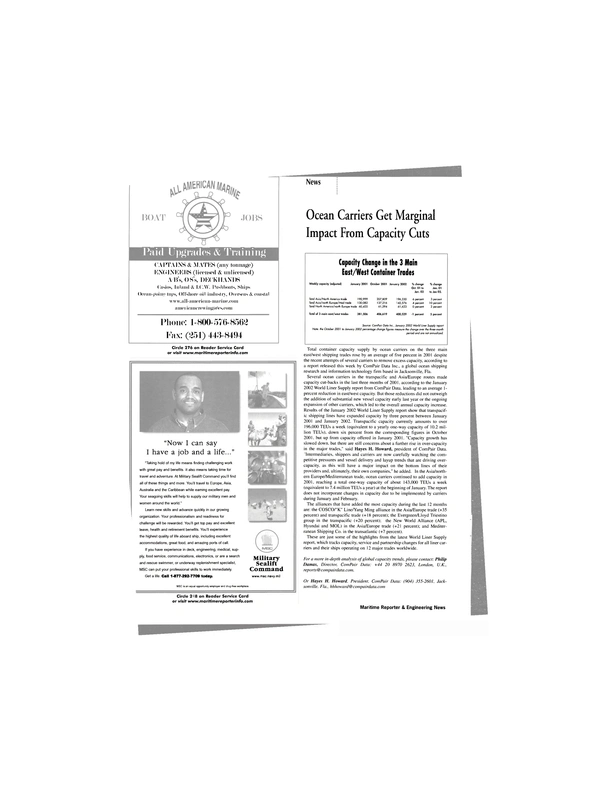