Atlantic Marine-Mobile was granted myriad of cruise ship refurbishment contracts throughout 2001, beginning with Holland America's Maasdam, which spent approximately 14 days last January at the Alabama yard's drydock. During this period, the vessel underwent steel prefabrication and installation of a new 2,400 sq. ft. teen room, which was put in place via the yard's 275-ton bridge crane Goliath.The yard also completed a major cruise ship conversion to a Zenon system on Holland America's Zaandam in order to achieve the highest level of environmental compliance. The vessel, which is the second Holland America ship to undergo voluntary installation of a Zenon system, is now in the fullest compliance with federal and Alaskan regulations, including the Coast Guard Reauthorization Bill, Title VII, regarding the disposal of graywater in Alaskan waters. The Zenon system allows the ship to discharge treated black and gray water so that it is near drinking quality.

Since it was imperative that Zaandam be out of service for the least amount of time possible, Atlantic dispatched a riding crew to St. Thomas to meet the vessel so that they could begin work while the vessel completed its cruise to Fort Lauderdale, Fla. The crew then rode the ship into Mobile. Ala., where the completion of the work (as well as routine maintenance) was performed in a record four days time.

The yard also received a contract trio from Carnival Cruise Lines for work on Celebration, Jubilee and Imagination. Celebration, which was at Atlantic's Alabama drydock for the fourth time, spent approximately one week in September for a standard docking.

Jubilee made its premiere visit to Atlantic in late October 2001 for the installation of a new waste management system; which included an incinerator and recycling capability. The work on the 733-ft. (223.4- m) vessel was completed in just 11 days. The last of the Carnival trio — Imagination — entered the yard in late November for a full 14-day drydocking. Atlantic provided hydro-blasting capability to meet the owner's requirements for paint removal. This type of blasting also increases the yard's efficiency as it permits the additional machinery work on the rudders, tailshaft and thrusters to be completed at the same time without any contamination of the work area. 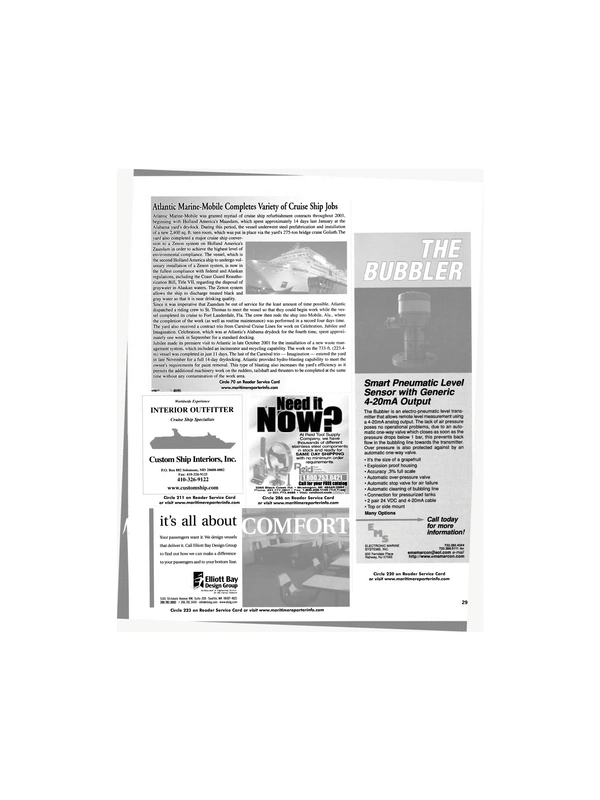