Vision, a unique VLCC built by Korea's Hyundai Heavy Industries Co., Ltd. (HHI) in that it features twin-engines and twin-propellers, was recently christened at the Ulsan Shipyard. Concordia Maritime AB's new ultra-large 315,000-dwt VLCC was christened by Mrs. Karen Fidler, wife of the president of Sunoco Inc., the company that chartered the VLCC.

Built for Concordia Maritime, of the Stena organization, the VLCC is a revolutionary type of crude oil carrier. The 1,102 ft. (336 m) long Stena V-Max design VLCC differs from other large tankers built in the world to date.

This twin-engine configuration gives the VLCC substantial advantages since one main engine can be shut down for maintenance while the vessel continues its voyage with the other. But these double functions represent an extra safety feature, and provide the VLCC with maneuverability touted as far superior to that of other conventional VLCCs.

The V-MAX is thus designed to overcome any single type of system failure — a yet unrivalled active safety capability which we consider just as important as the passive safety of a double hull," said Lars Carlsson, Concordia's managing director. "Statistically more than 30 percent of serious tanker accidents are caused by vessels losing control due to machinery and system failures. This risk is all but eliminated in the V-MAX.

Using only one of its twin engines, the vessel can maneuver during a period of minimum 72 hours at a speed of at least six knots in a head sea and gale force winds of Beaufort force 8. This reserve of power makes it the first VLCC tanker to satisfy Det Norske Veritas' Redundant Propulsion Separate (RPS) requirements." In terms of maneuverability the V-MAX reportedly performs considerably better than a conventional modern tanker. At a maneuvering speed of eight knots, the vessel's turning circle is tighter than that of a Suezmax of half its size. The new VLCC — with a service speed of 16.9 knots — also employs an exceptionally beamy, shallow-draft hull form. The vessel has a beam of 229.6 ft.

(70 m), compared to the normal 190-197 ft. (58-60 m) one for VLCCs. These features make it possible for the VLCC to offer a 30 percent higher loading capacity on a limited draft than more conventional VLCCs. The second of the twoship order is scheduled for delivery in June.

As navigation errors account for about a third of all tanker accidents, great emphasis has been put on the arrangement, equipment and layout of the navigation bridge, as well as on the training of deck officers. For instance, the bridge provides a 360 degree window view from a centralized co-pilot conning station where all control and monitoring can be performed through the state-ofthe- art Integrated Bridge Control System (IBCS). Training has been conducted in cooperation with local pilots using a full-scale bridge simulation model featuring the vessel's primary trading environment, the Delaware River.

Affectionately known as 'the Floating Volvo' — a nickname branded by Admiral James Card of the U.S. Coast Guard — the V-MAX has slow-speed main engines which satisfy the new IMO requirements for Nitrogen Oxide emissions and also have separate tanks for more environmentally friendly fuel for operation in sensitive areas calling for reduced emissions. She is prepared to be the first large tanker equipped with 'intelligent' engines (MAN B&W 7S60 MC-C) with enhanced combustion control, enabling fuel consumption or NOx emissions to be minimized in each speed range. Also lubrication oil consumption is significantly reduced. In the interests of long term corrosion resistance, the ballast tanks are double coated with epoxy totaling 300um, and the cargo tanks are coated from the tank bottom and one meter up and from the under deck and two meters down; including complete coating of the transverse web frame. Particular efforts have been made in meticulous preparation of the steel surfaces and climate control for ultimate paint adhesion. As a result, the ship has a life expectancy in excess of 30 years. 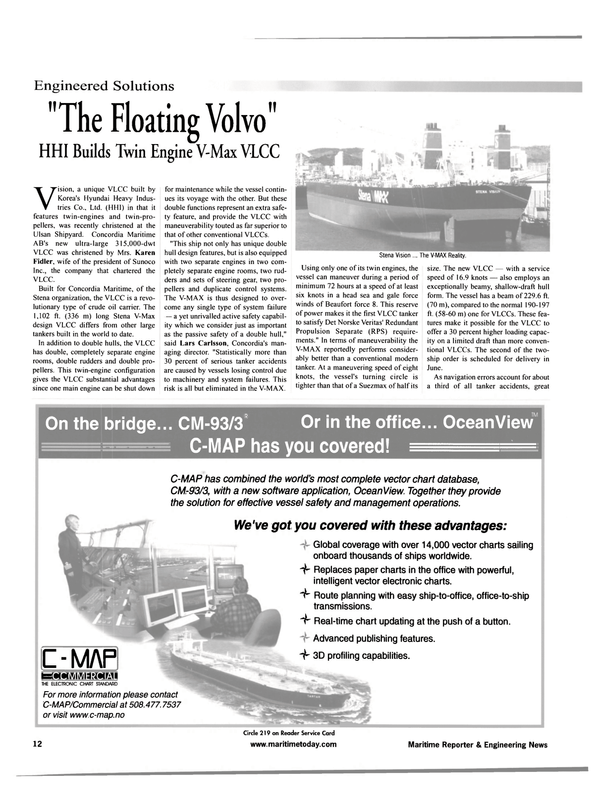 Other stories from May 2001 issue