The FPU Market Is Primed To Produce

According to a study just completed by IMA, 121 floating production systems are in operation or available. This is an increase of approximately 90 percent over the number of units in operation five years ago. About one-quarter of the units are operating off Northern Europe, another quarter off Brazil and the remainder are mostly in the Gulf of Mexico, offshore China/Southeast Asia, West Africa and Australia.

Accounting for this shift in platform is the growing popularity of spars as dry completion units and the lack of suitable semisubmersible hulls that can be used for conversion to production facilities (see chart 2).

Where will they be placed?

A noticeable shift has also taken place in where these floating production systems are to be used.

Almost half of the units under construction in 1996 were for fields in the North Sea and another 30 percent of the units were destined for use offshore Brazil. Now the major destination is the Gulf of Mexico, which accounts for more than one-third of the systems currently on order. Equally significant is the increased presence of West Africa as a destination for floating production systems. There are now as many systems on order for use off West Africa as for use in the North Sea (see chart 3, page 36).

New floaters planned or under study IMA has identified 155 offshore projects in the bidding, design or planning stage where a floating production and/or storage system is being considered as a development solution. Projects off West Africa account for 26 percent of these planned projects and the Gulf of Mexico accounts for another 22 percent. There has been a significant drop in number of projects planned in the North Sea vs.

five years ago, reflecting the downturn in new activ- activity in the North Sea (see chart 4).

Future equipment orders Over the next five years, we are projecting orders for an average of 13 to 17 production floaters annually. FPSO vessels will clearly be the predominant type of production unit, accounting for more than two-thirds of the units to be constructed.

Production spars will be the second favored production solution. They are particularly suited to deepwater. midsized fields that have access to pipeline infrastructure. A particular advantage of spars is their ability to accommodate dry trees, a major feature on fields with high paraffin content. TLPs, particularly the mini version, and production semis will make up the remainder of orders (see box 1, previous page).

Orders for shuttle tankers — A number of fields in the ultra-deepwater sector of the Gulf of Mexico are not within the economic reach of the existing pipeline infrastructure and shuttle tankers will be the only option for transporting produced crude to U.S. refineries.

These vessels will likely be Aframax size, fitted with dynamic positioning capability and priced in the area of $100 million. We expect the first orders for Gulf of Mexico shuttle tankers to be placed within the next 12 to 24 months, providing an interesting source of business for shipbuilders and equipment suppliers.

What Type of Floater Will Be Used?

• Offshore West Africa the most likely solution will be use of nonweathervaning FPSOs tied to subsea wells. Purpose-built units will be ordered for big fields such as Rosa, converted hulls for smaller fields.

On very large fields, a spar or TLP will be considered for use as a production hub, but the local partner will likely push for the least cost up front solution, which leans toward selecting FPSOs with subsea completion.

• In the Gulf of Mexico, spars, mini-TLPs or production semis will be the likely production solution on fields where they can be tied to the existing pipeline infrastructure.

Operators in the Gulf like to minimize operational cost by utilizing surface trees, a capability of spars, making this production option attractive. Weathervaning FPSO vessels will be a potential solution in the ultra-deepwater central and western areas distant from pipeline infrastructure, with shuttle tankers used to deliver crude to the refineries along the Gulf Coast.

• Offshore Brazil, Petrobras will undoubtedly lean toward FPSOs (based on converted hulls) tied to subsea wellhead facilities in order to minimize capex. Existing production semis will be moved around as fields close, but there will be probably no additional semis acquired, unless a semi hull of opportunity emerges. Oil majors operating offshore Brazil may be willing to incur the added capex of spars or TLPs to enable use of surface trees in order to minimize well maintenance cost.

Converted hulls will be more likely to be used off Southeast Asia.

North Sea production units will be mostly weathervaning FPSO vessels (some purpose-built, some based on converted hulls), with a possible TLP or spar on larger fields. Units now on station will be moved around.

The group will analyze how to develop standardized, modular, compact and remotely operated facilities that would sit on the seafloor and could reduce the operating difficulties, costs and environmental impacts of deep-sea production.

It is anticipated that the result of the study will yield the following benefits: • New cost effective production facilities that are removable and will have parts that can be reused or recycled; • Increased oil recovery over traditional field development options such as floating production storage offloading; • Spin off technologies in the area of oil and gas treatment that could improve the operation of conventional facilities. 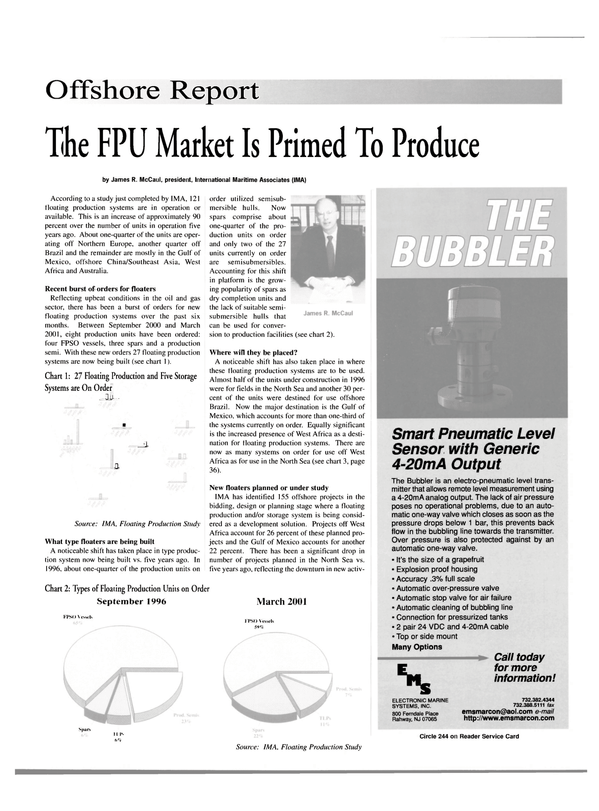 Read The FPU Market Is Primed To Produce in Pdf, Flash or Html5 edition of April 2001 Maritime Reporter

Other stories from April 2001 issue