The last quarter of 2000 proved to be an exceptionally active one for ASRY — the yard was filled to capacity during the last year.

This upswing, which had been projected prior to the fourth quarter, has proved to be true with the company's 300 percent increase in the ULCC and VLCC market during that period. The level of repair activity has been high on vessels in the 40,000 dwt to 100,000 dwt class with more than 12 being drydocked for repairs.

A total of 29 vessels visited ASRY during this period, the largest being Bergesen's 360,700 dwt Berge Enterprise.

Approximately nine bulk carriers were docked, and there was also a demand for steel renewals during the period with 766 tons being replaced — a total of 4,362 tons of steel work during the year. Blasting and painting contin- ued to be a steady with 830,000 sq. m being applied to various vessels.

In addition to the contract that ASRY signed with Bergesen, the yard agreed with Iran Offshore Engineers for the complete conversion of derrick barge Abouzar 1200 into a pipelay barge.

The contract, which will be completed this year, sets the standard for ASRY to enter into the major conversion market for offshore oil and gas field contracts.

The yard is working continually to diversify its activities and has done so with major contracts for myriad of onversion and upgrade work on a variety of jobs, such as offshore drill rigs, diving support vessels and dredgers. 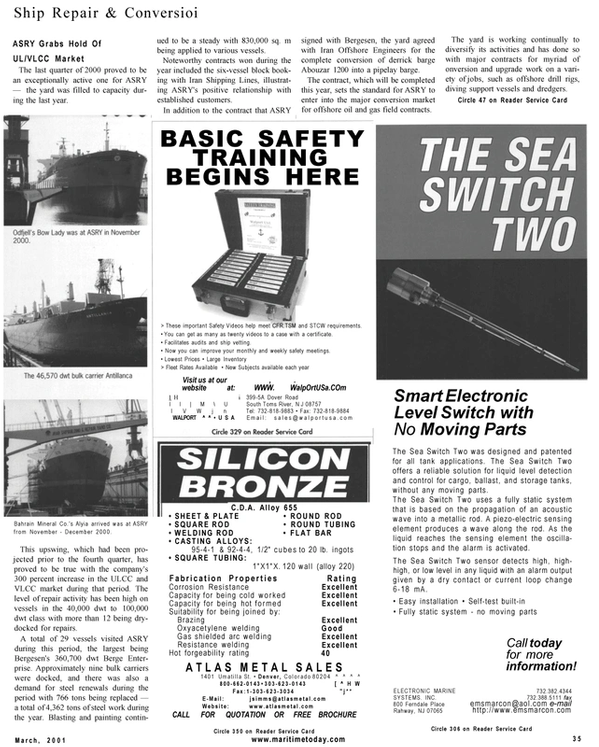