ABS Under Fire, Fights Back

As was the case when the Erika went down off the coast of France in late 1999, much (unwanted) attention has been focused on the classification society for the damaged product tanker Castor, in this case American Bureau of Shipping. Unlike the aforementioned example, however, ABS has been aggressively addressing the matter in the public forum, releasing historical details as well as ongoing information regarding the status of the ship and its role in the ultimate resolution.

ABS almost immediately stepped up its assistance efforts in response to the continuing failure of any nation to offer the vessel a port of refuge. At press time, ABS president Robert D.

Somerville noted: "It has been 10 days since this ship arrived at a port seeking refuge. If that refuge had been granted the vessel would be heading to a repair yard by now. Since it has not, our concern for the safety of the vessel continues to escalate." ABS suspended classification of the Castor on January 4. pending resolution of the casualty damage. "This is standard procedure when there has been significant damage," ABS ehief surveyor Gus Bourneuf explained. "We are continuing to work closely with the owner in its attempts to safeguard the vessel." The vessel underwent its last annual survey in August 2000. No outstanding recommendations were recorded. It underwent Intermediate Survey in November 1999 and was not due for the next special survey until June of 2002. The ABS surveyor attending the vessel after the casualty also confirmed that it appeared to be well maintained.

ABS formed a crisis management team following the report of the casualty comprised of senior executives of both the classification society and the affiliated ABS Group Inc. That company has been providing Rapid Response Damage Assessment services to the owner from the outset including a detailed lightering sequence that would minimize any stresses placed on the damaged section of the deck.

The Castor is one of three vessels built to ABS class in 1976 and 1977 by Korea Shipbuilding & Engineering. The other two vessels were transferred out of ABS class in the mid-1980s.

Following apparently politically motivated statements from Spanish authorities that the ship was "substandard." ABS initiated and completed an extensive review of the complete survey history of the troubled tanker Castor and categorically refuted the allegations.

"This vessel is a damaged ship, not a substandard ship," said Somerville. "It is unfortunate that many of the good intentions that have flowed from the Erika disaster have led to this sort of political, rather than subjective assessment of a maritime casualty," he stressed. "Age is not the determinant of the condition of a ship. It is the manner in which that ship has been managed and maintained that defines its condition.

Our records clearly show that this vessel has been conscientiously maintained by a responsible operator." In proving the point, he said that since 1997 there has been more than 600 tons of new steel placed into the vessel to maintain full conformance with ABS Rule requirements. This has included extensive replacement of the underdeck longitudinals and main deck plating.

"Product tankers, particularly those that operate extensively in the gasoline trades, are subject to corrosion in certain suspect areas of the cargo spaces," explained ABS' Bourneuf. "That is why our survey procedures particularly target these areas for close up inspection.

Our survey records from the time of the Castor's second Special Survey in 1992 show a consistent pattern of inspection and steel renewal in these areas, in addition to regular scrutiny of the entire structure and safety equipment," said Bourneuf.

"That the vessel has survived in open water for almost two weeks following heavy weather damage is a testament to the residual strength of the hull and the condition of the undamaged structural components," he added. "Our opinion is backed up by the vessel's good Port State Control record which has seen no detentions and a very small number of minor deficiencies, none of them structurally related, over the last two years despite frequent inspections." 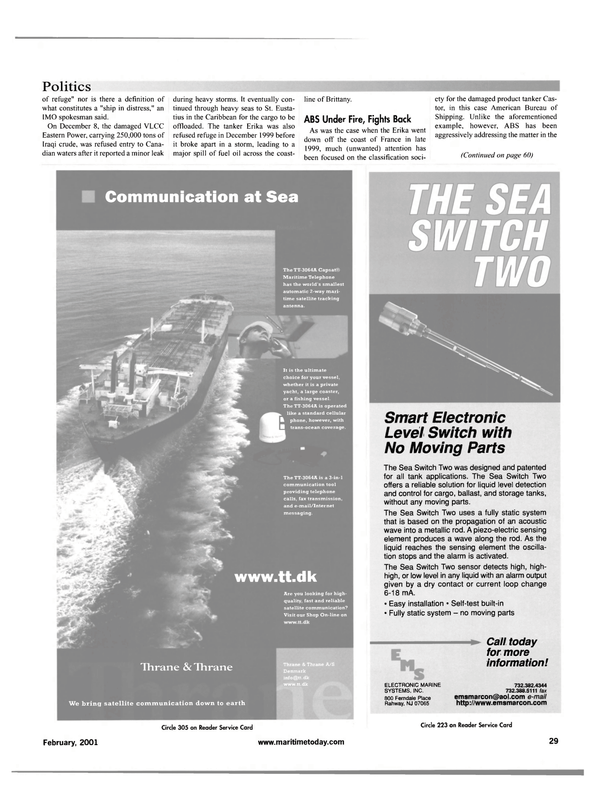 Read ABS Under Fire, Fights Back in Pdf, Flash or Html5 edition of February 2001 Maritime Reporter