Alabama Shipyard has signed a contract to build an articulated tug and barge (ATB) vessel for Allied Transportation Company of Norfolk, Va. Both vessels will be designed and built to ABS classification standards.

"This is our third major contract award during the last four months of 2000," said Dick Wells, the yard's president.

"The total value of these contracts is greater than $65 million. Our employment will grow to over 600 an increase of 300 new jobs from today." Alabama Shipyard designed the 129,000-barrel. 450-ft. (137.1 m) barge in compliance with the Oil Pollution Act of 1990 ("OPA 90"), which requires vessels to have a "double-hull" in order to provide greater safeguards to the marine environment. OPA 90 requires most large coastal barges operating in the petroleum and chemical trade to have double hulls by 2005.

of Kansas City, Miss. The system consists of two independently mounted gear drive ram assemblies, which connect the tug and barge. The tug is able to push a loaded barge at approximately 11 knots, up to 35 percent faster than traditionally towed barges.

Additional benefits of this ATB unit include the ability to operate in the widest range of sea states; the complete elimination of tug/barge hull contact; fail-safe mechanical connection with redundant controls, and elimination of the expense and hazards of towing lines and related gear. The tug/barge can be engaged and disengaged without crew on deck. 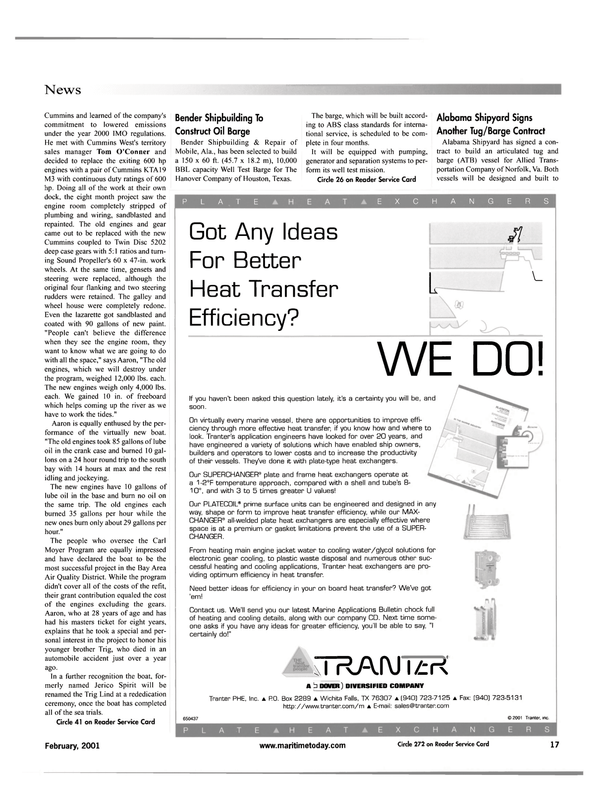