Heroes on the High Seas

On Sunday, December 17, 2000 a raging storm was brewing off the coast of Virginia. Record-breaking waves were measuring anywhere from 30-40ft. and the wind was gusting at about 70 knots.

In the middle of the Atlantic, (220 miles off the coast of Norfolk, Va. to be exact), a 600 ft. (182.8 m), 21,000-ton cruise ship was in trouble, its crewmembers ready to abandon ship into the cold ocean. With only seconds to decide the fate of his vessel, the captain of the Sea Breeze I, placed a mayday call via the vessel's Inmarsat Standard-C distress feature, indicating that the now-defunct Premier Cruise Lines' vessel might sink.

By Regina P. Ciardiello, associate editor The dramatic rescue of SeaBreeze's 34 crewmembers began on that Sunday morning, when Eileen Joyce received an alert at COMSAT Mobile's Southbury, Conn, land earth station. Joyce described the message that came through as one that signaled the vessel's inability to navigate due to a loss of power. As the lead operator on duty, Joyce fastidiously alerted the U.S. Coast Guard station in Portsmouth. Va. via a faxed message. Upon receiving the message that a 600-ft. (182.8 m) cruise ship was in distress and its crew was ready to abandon ship, the Coast Guard knew that this was not your average rescue mission.

Through the power of SeaBreeze's Inmarsat terminals, which up until then had been "barred" for commercial traffic due to Premier's entrance into bankruptcy this past September, Joyce overrode the "bar" and activated the Mini-M voice terminal onboard the vessel, thus establishing voice satellite communications between the distressed vessel's captain and the USCG Station in Portsmouth.

The conversation that transpired would be one that allowed the Coast Guard to assess the situation at hand the ship's engine room was flooded, had no power and could sink in a matter of seconds.

SeaBreeze I, which was en route from Halifax, Nova Scotia to Charleston, S.C.

for lay-up work, first experienced signs of doubt off the coast of Virginia. A product of the recently bankrupt Premier Cruise Lines' "Big Red Boat" fleet, the vessel, which was now in the possession of Cruise Ventures 3, was headed south to be prepped for a possible sale. Mother Nature, however had other plans for the ill-fated vessel.

On duty that night at the Coast Guard air base in Elizabeth City, N.C. was helicopter pilot Lt. Randy Watson and his Co-Pilot Lt. Steve Bonn, who were waiting to see how the day's events would transpire. Bonn, who only began his tour with the Coat Guard in August, called the SeaBreeze I rescue, something that "you wait your whole life for." For Bonn, however, his moment came early in his career as he had only carried his second mission that morning. Bonn, who previously flew Black Hawks for the U.S. Army, readied for the flight out to sea.

Taking off about 30 minutes prior to Bonn's and Watson's HH-60 Jay Hawk helicopter was Lt. Dan Molthen; his copilot, Lt. j.g. Craig Neubecker; and rescue swimmer. Class Petty Officer Darren Reeves. Molthen and his crew arrived on the scene and spotted the SeaBreeze listing among the high winds and waves. Amidst the brewing storm, Molthen steadied his helicopter only five feet above the vessel, due to the severity of the weather conditions.

Hoisted down into the basket was diver Reeves who was greeted by a swarm of crewmembers, most of whom did not speak English. He motioned to them to form a line, trying to explain as best he could that he would get everyone off the stricken vessel - no one would be left behind.

Despite his efforts to get the crew up to Molthen's helicopter in an orderly fashion. Reeves experienced a scenario that was anything but. According to Molthen. the crew would rush the bas- ket, sometimes 10 at a time as soon as it was lowered. One crewmember even had a knife discreetly wrapped in a bandana, which he inevitably thought would allow a quicker escape route.

Reeves, demonstrating his authority, restrained the irate crewmember and confiscated his knife — tossing it into the vessel's pool.

Since most of the crewmembers were not of large build, Reeves was able to load two of them into the basket at a time, allowing Molthen and his crew to reach their goal of rescuing half of the 34-member crew while still having 4,000-lbs. of reserve fuel left in the helicopter's tank. Noticing his reserves were running low, he radioed to Watson and Bonn in the second helicopter, alerting them that he was ready to turn back to the base. The second helicopter, which was accompanied by a C-130 search plane, took over the helm above SeaBreeze by lowering its rescue swimmer, Bob Florisi, down to the vessel's deck. Florisi assisted the remaining passengers, which unbeknownst to him and his crew, only amounted to eight. Figuring that the first helicopter had only taken 17, the C-130 and the helicopter did one more thorough search around the vessel to make sure no one was left behind — not realizing that Molthen and his crew had lost count in the frenzy of the rescue and inevitably loaded 26 crewmembers onto the helicopter. This coupled with the captain's assurance that all of his crew were lifted off the ship's bow, enabled the Coast Guard to pro- claim that their mission was finished or so they thought.

According to Bonn, who acted as lead pilot on the second helicopter on the return trip, the flight path back to Oceana Jet Base in Norfolk, Va. was laden with a massive storm. Fighting zero visibility, wind shears and the threat of lightning at stake, Bonn carefully guided the team home with help from the helicopter's advanced navigational equipment. Touching down at Oceana, Pilots Molthen, Watson and their crews were greeted by a frenzy of emergency services, INS and official authorities who would examine the crew, which amazingly sustained nothing more than slight hypothermia. Only one crewmember, who already had a pre-existing cardiac condition had to be hospitalized for chest pains. 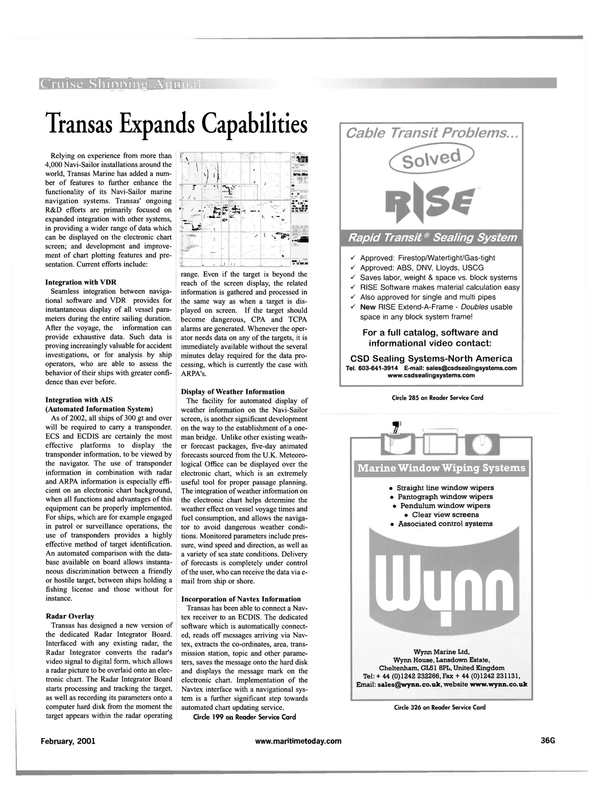 Read Heroes on the High Seas in Pdf, Flash or Html5 edition of February 2001 Maritime Reporter