A situation ongoing at press time half way around the world promises to affect the way in which ship emergencies are handled in the U.S. and abroad. Last month, debates were raging and political fur was flying as the stricken tanker, Castor, carrying 29,000 tons of gasoline, was held in limbo as authorities on many levels debated the best course of action. The ship, which was damaged but still afloat and operational, was turned away from three countries Morocco, Spain and Gibraltar — as it went to for assistance.

Greek operator Athenian Sea Carriers said that the Moroccan Coast Guard instructed the vessel to move 40 miles offshore, while a decision was made on the final destination for the carrier, which was damaged during heavy weather between December 26 and December 31 on a voyage from Constanza in Romania to Lagos. A surveyor reported that the crack occurred along a transverse butt-weld next to number four hold, with some reports saying that crack was 66 ft. (20 m) long. Apparently the tanker was not yet leaking any cargo. The main concern, beyond any potential environmental disaster in the case of the ship breaking up, was that the deck plates would rub, spark, and ignite the cargo. As the saga continued, tensions obviously grew increasingly high, with the captain and crew at one point threatening to abandon the ship in the event of continued indecision.

Nowhere to Hide The Castor saga succinctly illustrates gaps in protocol in the handling of damaged, but seaworthy ships. All of Europe - much as the U.S. is - is particularly sensitive to potential ship sinking and ensuing environmental disaster, in the wake of the break up of the Erika off the coast of France just one year before.

As a resolution to the Castor situation dragged on, the International Maritime Organization (IMO) called for measures to ensure refuge for troubled ships like the Greek tanker Castor. "The time has come for the organization ... to adopt any measures required to ensure that...

coastal states review their contingency arrangements so that disabled ships are provided with assistance," Secretary General Bill O'Neil told an IMO committee meeting in London. "That incident brought to light once again the question of ports of refuge," said O'Neil.

Nicolas Hondos, CEO of Athenian Sea Carriers said during the ordeal: "The Castor has now been seeking a Port of Refuge for more than one week.

Every day that passes, increases the risk of further deterioration in the weather and risk to lives and of pollution." Hondos said there was a large team of experts on the scene, fully supported by tugs and equipment. The ship is in the tow of the world's most powerful salvage tugboat, Nikolay Chiker, with all crew off the ship.

There are currently no legal obligations on coastal states to provide "ports of refuge" nor is there a definition of what constitutes a "ship in distress," an IMO spokesman said.

On December 8, the damaged VLCC Eastern Power, carrying 250,000 tons of Iraqi crude, was refused entry to Canadian waters after it reported a minor leak during heavy storms. It eventually continued through heavy seas to St. Eustatius in the Caribbean for the cargo to be offloaded. The tanker Erika was also refused refuge in December 1999 before it broke apart in a storm, leading to a major spill of fuel oil across the coastline of Brittany. 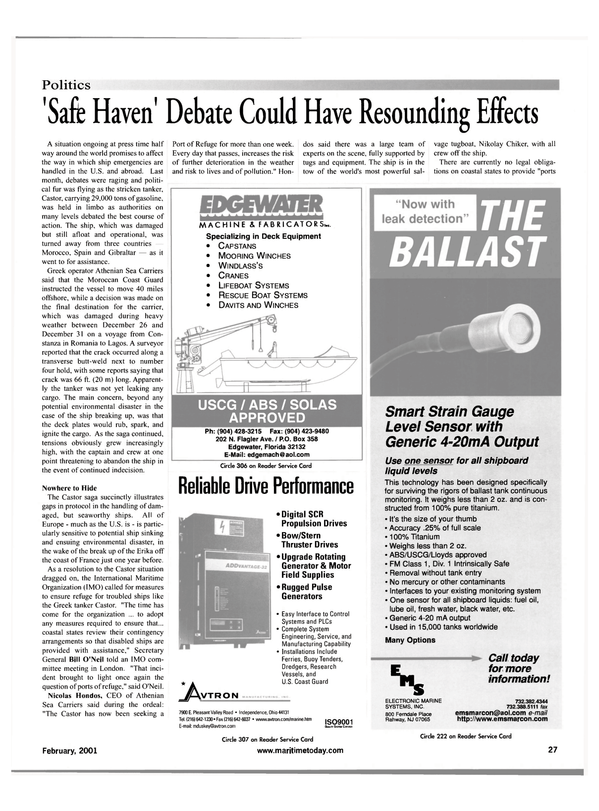