When the State of California, long a leader in reducing air-pollution, announced the Carl Moyer Program to reduce NOx emissions, towboat owner Aaron Lind and his family decided to get on board. The program is supported by a one-time appropriation of $50 million dollars for the 2000/2001 fiscal year. A significant portion of this amount was allotted for Carl Moyer Program incentive grants, as a means to reduce emissions from heavy-duty engines.

These grants cover the incremental cost of cleaner on-road, off-road.

Beginning in summer 1999, grants became available through participating air pollution control and air quality management districts grants. "The incentive program focuses on reducing emissions of smog-forming oxides of nitrogen (NOx), but will also reduce particulate emissions. In recognition of his work in the air quality field and his efforts in bringing about this program, the incentive program is named after the late Dr. Carl Moyer." said a State of California press release.

Aaron Lind, who operates Jerico Products with his father and older brother, decided that their boat, the Jerico Spirit, was a perfect candidate for the program. His father, Mike Lind, had purchased the boat in Tennessee 20 years ago and barged it around to the company's property at Petaluma, 17 miles up the river of the same name from San Pablo Bay on the north side of San Francisco Bay. He then cut the boat, originally built in 1948, in half lengthwise and added 10 ft. (3 m) of beam to bring it to 76 x 32 ft. (23.1 x 9.7 m) At the same time, he repowered the boat with a pair of 600 hp two-cycle opposed piston Fairbanks Morse engines. Even as new engines, the twocycle technology of the era didn't give much thought to emissions. The 20- year-old engines had been rebuilt earlier and still ran well enough but they certainly weren't efficient.

Aaron had some experience with Cummins and learned of the company's commitment to lowered emissions under the year 2000 IMO regulations.

He met with Cummins West's territory sales manager Tom O'Conner and decided to replace the exiting 600 hp engines with a pair of Cummins KTA19 M3 with continuous duty ratings of 600 hp. Doing all of the work at their own dock, the eight month project saw the engine room completely stripped of plumbing and wiring, sandblasted and repainted. The old engines and gear came out to be replaced with the new Cummins coupled to Twin Disc 5202 deep case gears with 5:1 ratios and turning Sound Propeller's 60 x 47-in. work wheels. At the same time, gensets and steering were replaced, although the original four flanking and two steering rudders were retained. The galley and wheel house were completely redone.

Even the lazarette got sandblasted and coated with 90 gallons of new paint.

"People can't believe the difference when they see the engine room, they want to know what we are going to do with all the space," says Aaron, "The old engines, which we will destroy under the program, weighed 12,000 lbs. each.

each. We gained 10 in. of freeboard which helps coming up the river as we have to work the tides." Aaron is equally enthused by the performance of the virtually new boat.

"The old engines took 85 gallons of lube oil in the crank case and burned 10 gallons on a 24 hour round trip to the south bay with 14 hours at max and the rest idling and jockeying.

The new engines have 10 gallons of lube oil in the base and burn no oil on the same trip. The old engines each burned 35 gallons per hour while the new ones burn only about 29 gallons per hour." The people who oversee the Carl Moyer Program are equally impressed and have declared the boat to be the most successful project in the Bay Area Air Quality District. While the program didn't cover all of the costs of the refit, their grant contribution equaled the cost of the engines excluding the gears.

Aaron, who at 28 years of age and has had his masters ticket for eight years, explains that he took a special and personal interest in the project to honor his younger brother Trig, who died in an automobile accident just over a year ago.

In a further recognition the boat, formerly named Jerico Spirit will be renamed the Trig Lind at a rededication ceremony, once the boat has completed all of the sea trials. 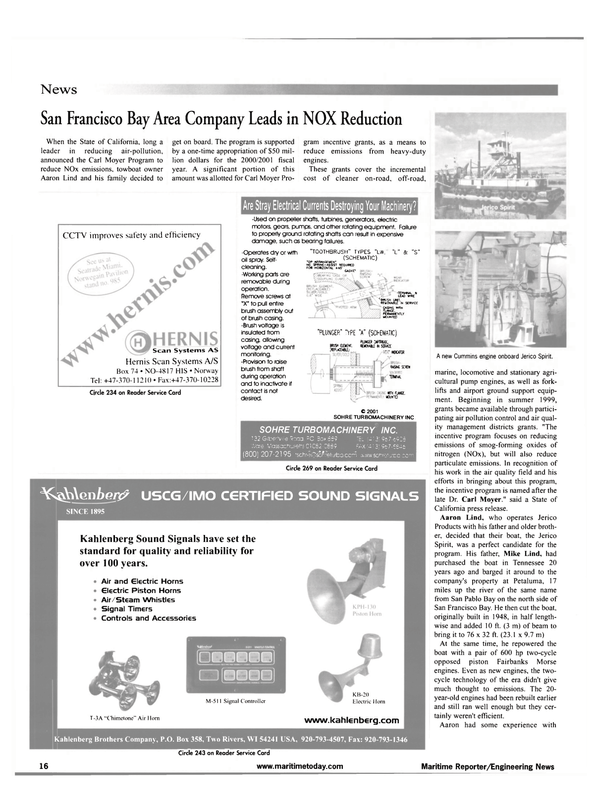