Crystal Cruises' parent company, NYK, signed a contract on December 12, 2000 with French shipyard Chantiers de l'Atlantique for the construction of a new luxury ship. The contract signing comes just five weeks after the formal Letter of Intent and establishes a June 2003 delivery date, almost six months ahead of original plans enabling the vessel to be operational for the summer season.

At its current capacity of 1,880 berths (940 each on Crystal Harmony and Crystal Symphony), Crystal Cruises is one of the largest luxury cruise operators in the industry. The yet-unnamed 68,000-ton, 1,080-guest ship will increase the line's capacity by almost 60 percent.

Crystal's newbuild will feature an even greater space-per-guest ratio than its sister ships. Like Crystal Harmony and Crystal Symphony, the newbuild will boast a full outside promenade, a grand observation lounge, a variation of the ships' popular Palm Court lounge, multiple dining venues, and a variety of entertainment lounges — including a stateof- the-art theater.

Environmentally friendly diesel engines will power the ship and an azimuthal pod propulsion system will be incorporated for greater maneuverability.

The lead architect will be Robert Tillberg of Tillberg Design, supported by a number of internationally renowned designers who will be involved with various aspects of the ship's interiors. 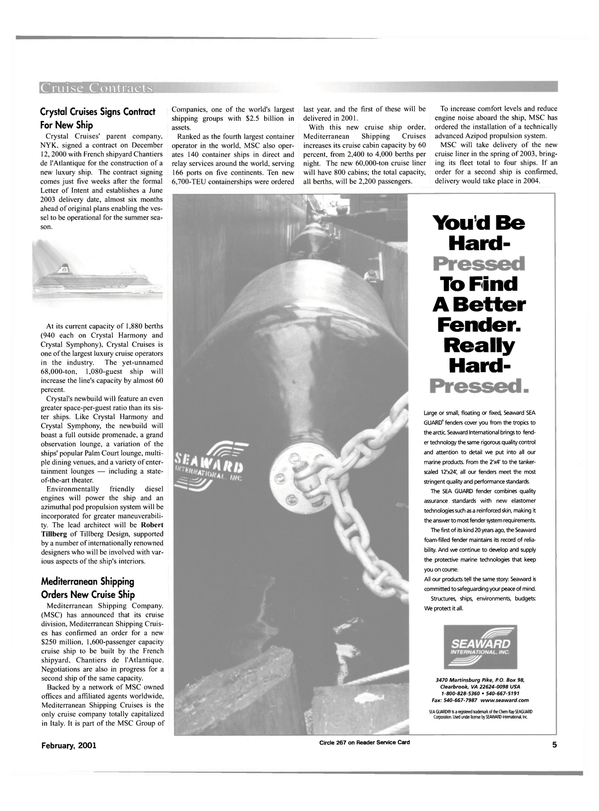