Since 1999, when American Classic Voyages (AMCV) first announced its intention to construct two U.S.-flagged cruise ships that would be staffed by American officers and crew, the U.S.

shipbuilding industry received a boost back into an area that it had not participated for almost 30 years - the cruise shipping market. Prior to the construction of the two vessels by Litton Ingalls Shipbuilding, AMCV wanted to start making money right away — it purchased the 17-year-old ms Nieuw Amsterdam for $114.5 million from Holland America. AMCV then received an official notice from Congress that provided exemption from the Jones Act, thus allowing the U.S. Coast Guard to re-flag the foreign registered vessel.

Before being repositioned to its new itinerary in the Hawaiian Islands, Patriot required a new look — a look that would exemplify its stature as the line's premiere vessel. Performing this daunting task in just five weeks was Portland shipyard, Cascade General, which provided all drydock and conversion work on the 704 ft. (214.6 m) vessel in time for its inaugural cruise on December 6, 2000.

Advanced planning and intense precision by Cascade General ensured that all work would commence in four specific areas the minute the ship arrived in Portland: new bow and stern thrusters, conversion of three public spaces to suit the Hawaiian market, complete refit with Coast Guard-approved safety equipment and identity change.

The hubs were overhauled and the blades polished and its starboard shaft was pulled for inspection by Lloyd's officials. Line-shaft bearings were also inspected. Pintle bearing clearances were measured, the steering gear serviced and more than 100 anodes replaced. All of Patriot's sea valves were examined. The vessel's 20-ton anchor was replaced and its chain ranged and marked.

Computer simulations tested the suit- ability of the 33,800 gt ship's existing pair of 750 kW thrusters for potential conditions in the Hawaiian Islands. The tests showed that additional thruster power would significantly improve maneuverability and safety, especially in outlying ports or when trade winds picked up. Any addition that was made in this area had proven to be troublesome because of the small presence of usable space below the waterline at both ends of the vessel. Under the leadership of Suren Menon, executive vice president in charge of cruise ship operations, Cascade's team was able to make the most of the limited space available. In the bow, Cascade's electricians prepped the route for the power and control cables for the thruster while the ship was still dockside. Menon's engineering team worked on the drydock floor, using its proven method of mounting a cutting torch on a radius arm rotating on the bow thruster centerline.

Known as a Cascade innovation, this process automatically ensures a perfect fit for the flared thruster mouth on the convex curvc of the bow plating.

The only available position for the vessel's additional stern thruster, weighing 4.5 tons, was in a supplementary fuel tank located two ft. below the bottom of an elevator shaft.

To direct the thruster's flow under the propeller shaft housing, the mouth of the tunnel was to have been flared out and angled down 20 degrees to within 6-in. of the keel. However, because of the limited lead time, both thrusters arrived from Kamewa's Swedish headquarters without the necessary tunnel extensions.

"We weren't made aware of this situation until the thrusters actually arrived here," Menon said. "There was absolutely no time to spare." Cascade's metal shop met the challenge to extend the nozzles forming and fabricating two pairs of flared tunnel extensions — using 26,000 lbs. of Lloyd's-approved one in. steel.

Since Patriot will remain in U.S. territorial waters on its seven-day, four-island cruises, the spaces occupied by the dutyfree shop and casino were now available for other uses. Alterations to the interior was designed by Yran & Storbraaten and carried out by James P. Colie of Florida.

Cascade's welders removed internal walls and cut openings for view windows on the starboard wall of the former casino on the Promenade Deck. The Colie team then moved on to create a "destination learning center" in the cleared space. The essence of Hawaiian style is clearly presented in the room's dividers, hardwood paneling and louvers, and wicker furnishings.

Taking the place of the vessel's Dutch-themed library will be an Internet cafe. Managed by Digital Seas, the nine workstations will operate at 128 kbps via MTN satellite.

The vessel's 12 lifeboats and four tenders did not release simultaneously at the bow and stern as mandated by U.S. Coast Guard regulations. All 16 boats were lowered and transported to a building bay where a production line was set up. The wires were replaced and davits serviced while each hull underwent structural alterations and reinforcement to accept the new Norwegian Durapart releases.

Under the Coast Guard's Alternative Compliance Program, Lloyd's, which has classified the vessel since its launch, will continue as certifying authority on everything except safety issues. Patriot received its final Certificate of Inspection from the Coast Guard and Lloyd's on December 23, at which time it departed for San Francisco. 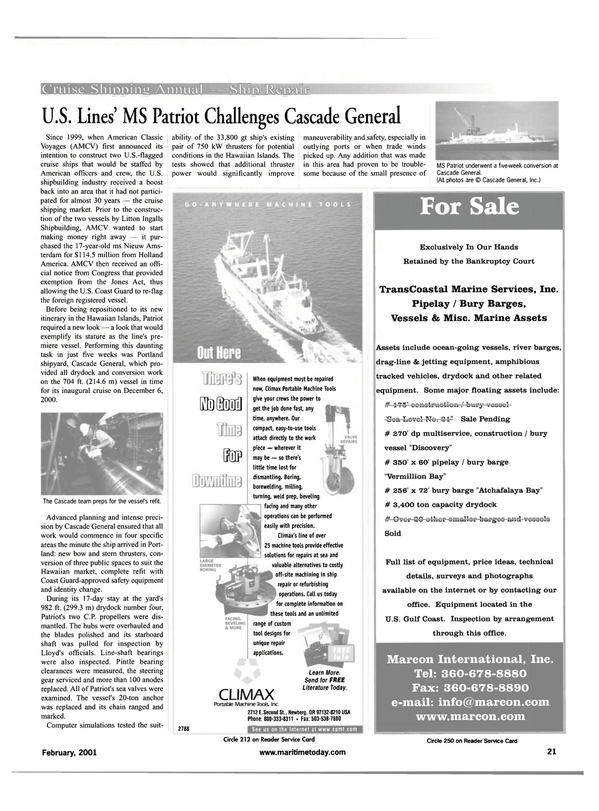