Moody's Investors Service downgraded Royal Caribbean's senior unsecured debt ratings reflecting higher than anticipated debt levels associated with the company's shipbuilding program, and a weaker price environment that may continue given the capacity expansion projected for the industry overall, as well as the weakening economic outlook.

The outlook is stable.

In 2000 the industry including Royal Caribbean experienced flat to declining net yields as a result of competitive conditions. Moody's expects this pricing pressure is likely to continue given the industry capacity expansion, and the weakening economic outlook that may result in slower demand growth relative to supply. Additionally, margins may also be negatively impacted by rising fuel costs resulting in lower than expected cash flow to support the company's ship building program.

Royal Caribbean will spend in excess of $5 billion over the next four years to build 10 ships, six of which will be delivered over the next two years. The company currently has 10 ships on order through the year 2004. Moody's notes, that despite the competitive pricing environment, the company was nevertheless able to increase retained cash flow in 2000 from the addition of two new ships to its fleet during the year. The ratings continue to reflect the company's strong market position, brand equity, as well as the company's conservative financial policies which are cxpected to continue. The ratings also incorporate the quality and age of Royal Caribbean's fleet as well as its experienced management team. Royal Caribbean is the second largest cruise line company. Moody's expect cruise passenger growth will generally kept up with net supply additions as has occurred in the past. However, Moody's believes it is likely that the pricing environment may be more difficult than that experienced during previous periods of capacity expansion given that the competitive pricc environment occurred during the more robust economic climate of 2000 and at the early stage of the industry capacity expansion. Moody's expects older ships will continue to be retired, as about 15 percent of the industry capacity is more than 20 years old which will aid the supply and demand balance. Furthermore, the industry has been consolidating with the top three cruise companies comprising more than 70 percent of capacity up from about 45 percent in 1991. Additionally, demographics are favorable to the industry since the average age (50) of the typical cruiser is within one of the fastest growing segments of the population. Also, the company continues to attract new first time cruisers, that indicates continued penetration of the cruise product. 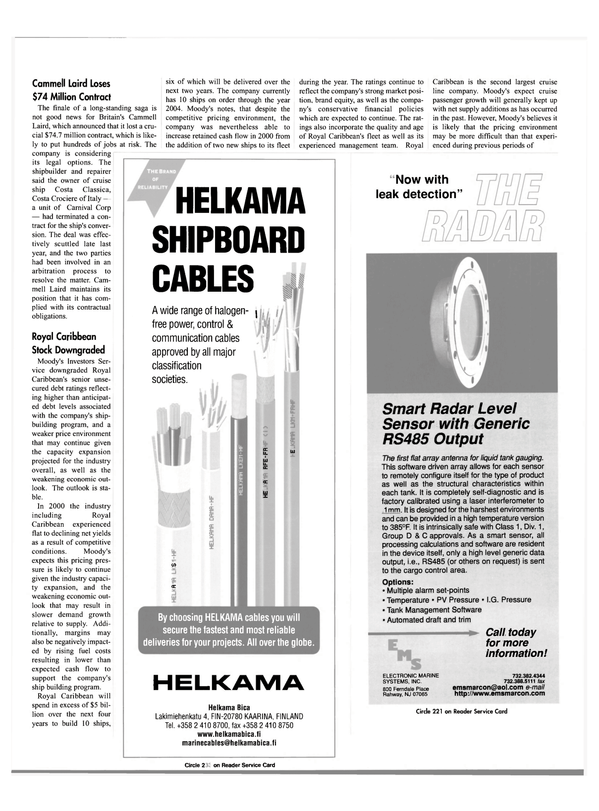