Epic proportions of automobile theft in the U.S. led to the creation a few years ago of an innovative product dubbed Lo-Jack, which is essentially a hidden transmitter placed in the vehicle which, when activated by a call of a stolen vehicle to the police, allows them to track the vehicle rather quickly. The same concept was recently rolled out for ships, particularly targeting owners operating vessels in areas of high piracy activity. Piracy is a serious threat to ships and the personnel that crew them.

With pirating activities running rampant in some parts of the globe — particularly the Far East - organizations from the International Maritime Organization (IMO) on down are devising means and methods to keep ship and crew safe.

CLS, a satellite-based company believes it has the product — one that relies on high-tech electronics and satellite communications — to help locate and recover ships in the event of a hijacking. The company has therefore created Shiploc, a new device developed in conjunction with the International Maritime Bureau (1MB), which is a major component in the fight against these acts of violence on the high seas.

This small device, which is the approximate size of a shoebox can easily be hidden anywhere on a ship. Installed per the vessel's owner, who can track its position at any time via Shiploc, the system is unbeknownst even to the ship's master and crew for extra precaution.

Since, according to P.K. Mukundun, IMB's director, "a vessel can move up to 15 positions a day," the owner can track its movement with Shiploc via Internet access on a personal computer.

Available in both normal and crisis mode, Shiploc allows vessel owners to track the positions of their ships through the Web site. When set in normal mode, Shiploc can also alert owners through both e-mail and the Web site as to whether their vessel arrived safely at its expected destination. If the owner logs on and finds that the vessel has gone off course, he can then kick the system in to crisis mode, which will alert IMB's Kuala Lumpur headquarters of a possible hijacking. Shiploc includes its own back up for extra protection, in case the vessel's power is cut off during a hijacking.

Shiploc is designed specifically for the maritime industry, and is available to owners for $280 a month including cost of satellite messages. 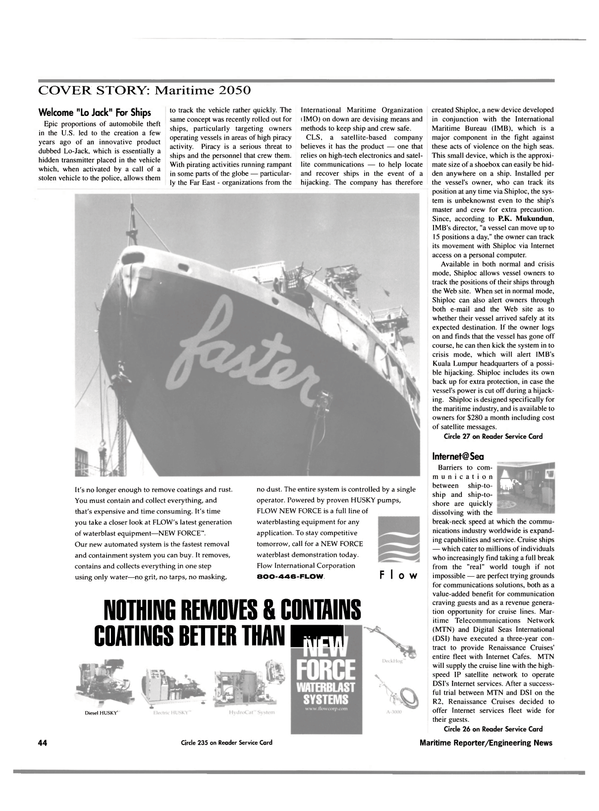