Integration of the showcase production hall of former eastern German engine builder Dieselmotorenwerk Rostock (DMR) into the MaK manufacturing system has provided a timely boost to output capacity for the medium-speed market. The conversion of the Warnemunde facility from its original twostroke diesel building remit to a clearly defined, four-stroke role, has coincided with the decision of MaK's U.S. parent organization to underscore its identity with German diesel engine production.

Accordingly, from the outset of August, MaK Motoren's Kiel-based operations have been vested under the company name Caterpillar Motoren, while the modern facility brought into the network last December has been retitled Caterpillar Motoren Rostock.

Most importantly from a commercial standpoint, however, the individual MaK and CAT brand names are being retained for marketing and support of the German-made medium-speed range in the respective marine and power generation sectors.

The refocused Warnemunde plant has been allocated construction and testing of the M43. the most powerful design in the MaK portfolio, releasing capacity at the extensively upgraded Kiel factory for turning out the smaller M20, M25 and M32 series. Caterpillar's MaK arm is therefore better placed to attain the volumes fundamental to business economics in today's rigorously competitive market, and to realize the U.S.

group's strategic objectives as to business expansion. Warnemunde provides the company with a strengthened manufacturing platform to realize the potential offered by the M43, which made its seagoing debut earlier this year.

By June 2000, sales of the in-line versions of the compact diesel had reached 56, including a fair proportion of twin and multi-engine installations. The existing range covers unit applications from 5,400-8,100-kW, but vee-type versions covering the band from 10,800 to 16,200-kW are under development, to extend the M43's market reach in areas such as cruise ship powering and landbased generation plant. The delivery program started from Kiel in the final quarter of last year, with propulsion machinery for chemtanker, deepsea fishing vessel and feedership tonnage.

Ensuing sales have seen the design especially favored for the smaller classes of containership.

Representing one of the most sophisticated applications for the new generation of medium-speed machinery, two eight-cylinder and two seven-cylinder versions of the M43 plus a six-cylinder M32 form the powerhouse for TT-Line's diesel-electric RoPax newbuilds at Bremerhaven.

The TT-Line ferries are further distinguished by the use of Siemens-Schottel pod propulsors. The M43 has subsequently been nominated for RoRo projects at Flensburger Schiffbau- Gesellschaft initiated by Faeroese company Smyril-Line and the progressive Turkish operator UND RoRo. 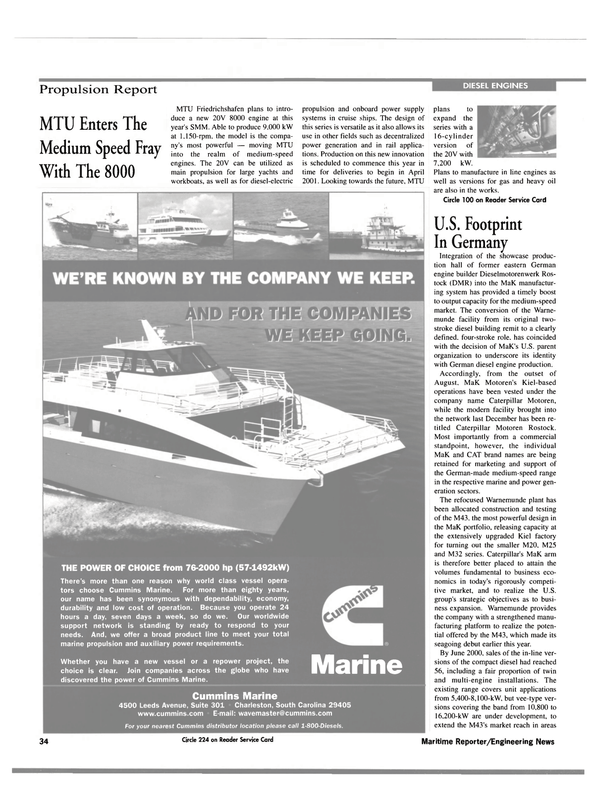