The annual exhibition sponsored by the Society of Naval Architects and Engineers (SNAME) is scheduled to be held in Vancouver, B.C., Canada — giving both attendees and exhibitors a direct connection with industry leaders from the Pacific Rim. the Northwestern U.S. and Canada. International networking, as well as the traditionally solid technical conference line-up could most definitely be touted as a main draw to SNAME, which held its earliest meetings in New York before eventually branching out to other locations throughout the U.S. This year's exposition and conference will be conducted at the Vancouver Convention and Exhibition Center, which is fittingly located between the oceans and mountains of one of the most picturesque harbors.

Touted as "Vancouver's most distinctive landmark," the convention center is strategically located minutes from the city's downtown area, offering both attendees and exhibitors direct access to Vancouver's scenic waterfront parkway for travel purposes.

The exhibition, which has never before been held in the Pacific Northwest, will begin on Wednesday, October 4 with special courses in Human Factors and Safety Engineering, and Naval Architecture. The main portion of the convention begins the following day with commencement of both the technical programs and the International Maritime Exposition. The exposition, which will be open on October 5-6 from 9:15 a.m. - 6 p.m. and 9 a.m. - 4 p.m., respectively will include seasoned maritime suppliers/companies representing various aspects of the maritime industry, such as: Cummins Marine, ABS, Alabama Shipyard- Atlantic Marine-Atlantic Dry Dock, Alstom, Jastram and Newport News Shipbuilding. The technical program boasts presentation of papers that have been submitted by a variety of industry experts. Occurring the same days as the exposition end of the SNAME convention, this portion will individually discuss (in one hour increments) each paper that was chosen for presentation.

Selected topics include, "Predicting the Per- formance of a Tug and Tanker During Escort Operations Using Computer Simulations and Model Tests;" The Impact of Bioconcretious Structures on the RMS Titanic: Implications to Maritime Steel Structures;" "Development of a Shallow Draft RoRo Transport Vessel, the M/V Delta Mariner;" and "Design Development of a Survey Yacht." In addition, there will also be a Technical and Research Session on Friday, October 6 from 1:30 p.m. - 5:30 p.m. dealing with completed and concurrent work of the Ad Hoc Panel on Ballast Water Management. This session will examine current information on regulations, ballast water exchange, onboard treatment methods and current experimental and full scale testing programs.

The conference concludes on Saturday, October 7 with a golf tournament from 8 a.m. - 4:30 p.m.

For a full listing of comapnies participating in SNAME and their exhibtion plans, please visit: w w w . m a r i n e l i n k . c om 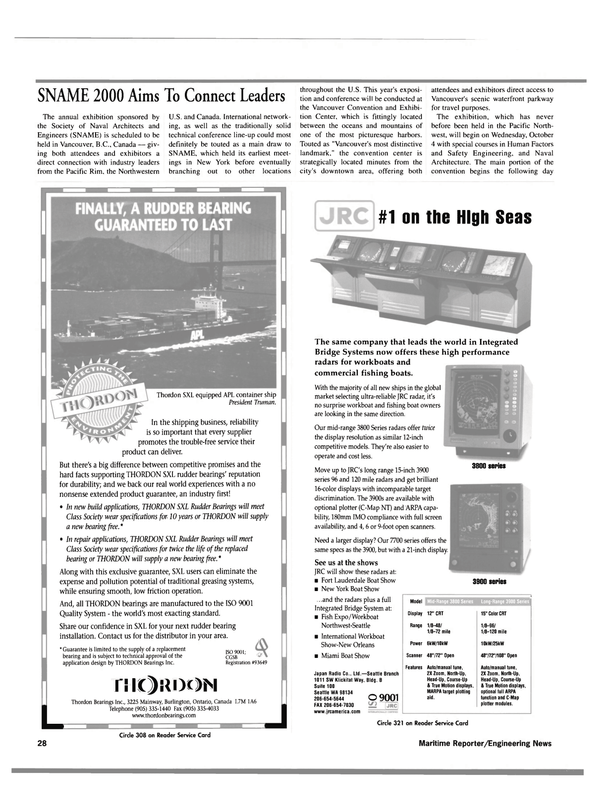