The current situation of the German maritime industry is not far from that which has existed for each of the past several SMM exhibitions in Hamburg. The collective group of shipbuilders, repairers and marine equipment product and system suppliers are still widely regarded as one of the most technically capable and technologically advanced in the world, utilizing generations of accrued know-how to deliver safe, efficient and reliable vessels and systems.

According to the latest world shipbuilding statistics, Germany ranks fifth in the world in terms of new tonnage built per annum, but with a market share of only four percent and an increasing outflow of business — particularly an outflow of simpler ship-type construction — to lower cost competitors in developing nations and Korea, the prospects for bolstering its annual volume is not great. However, the German marine faction does possess the enviable ability to consistently deliver products, systems and vessels to the aforementioned technological high, and it is this capability that separates it from its competitors and serves as the basis for expansion in the future.

Similarly, the situation regarding competition has not changed drastically in the last few years, specifically with regard to Korean shipbuilders who have continued to expand capacity, expansion in the face of stagnate (and many complain unprofitable) ship prices and massive financial losses by many of the Korean shipbuilder's parent corporations.

While an agreement between the EU and Korea regarding the elimination of shipbuilding subsidies has been agreed, there is still skepticism regarding not only the plan's ultimate implementation, but compliance.

The situation is exacerbated by the fact that new ship orders have been on a record pace of late, with newbuild demand jumping noticeably in 1999. A total of 1,523 ships representing 18.9 million-cgt were ordered last year, according to Herbert von Nitzsch, chairman of the managing board of Blohm + Voss. Healthy numbers were recorded throughout the shipbuilding world, with a total production of 17.5 million-cgt in 1999, and an existing orderbook of 37.5 million-cgt.

Good signs that this trend will continue make the fact that newbuild prices are so low that much more vexing for shipbuilders.

The trend toward containerization, particularly the proliferation of very large containerships with capacity for more than 5,000 TEU continues, and will most likely continue indefinitely with developments such as the 12,500-TEU vessels (see "Investment in Design," Maritime Reporter & Engineering News, August 2000, p.

8) currently under study. Safety matters, particularly when carrying oil or other potentially hazardous materials, will continue to drive new construction activities as well. Ripple effects from the Erika disaster off of France in late 1999 will continue to be felt for generations, with the immediate shake-out of older, singleskin vessels helping to bolster orderbooks in the near term. The continued stress on reducing a vessel's weight while increasing its performance, strength and reliability — particularly in the realm of fast, highspeed passenger craft — also bodes well for the German industry, in that it requires well-researched technological solutions.

Dressed for Success The ability for one country's equipment supplier base to continuously perform at such an elevated technological level is rarely matched in any industry, and attributable in part the country's overall reputation for the production of superior engineered products.

The market for marine products and systems is, naturally, on the upswing along with the world orderbook.

In fact, the German Association Marine & Offshore Equipment Industries (VDMA) estimates that the worldwide marine equipment market is in excess of $65 billion per year for new ship construction alone.

Another positive market force — positive, that is, in the eyes of marine equipment product and system suppliers — is the push for increasingly safe and environmentally sound ships and boats. Increased reliability, particularly in times of tragedy; the ability to locate, identify and avoid trouble; and reduced emissions are just three of the factors driving marine equipment development, are three factors, which will increasingly play a role in how ships are designed, built, outfitted and maintained. The German marine equipment market, though, is going through the same rapid re-organization as that of many of its colleague countries, as the manufacturers are, of course, not insulated from the flows of international business trends. The mergers, takeovers, partnerships and consolidations that have become an industry hallmark are far from complete, as the price of competing effectively in the global marketplace is superior product combined with efficient production. One of the more notable examples of this is covered in David Tinsley's article on the Caterpillar takeover of MaK, beginning on page 34.

Trends driving the German maritime suppliers, though, are not unique to issues pushing the rest of the world, chief among them being innovations that clearly enhance the use and cost-efficiency of a ship over the entire life-cycle. In the area of propulsion, this means an increased view towards alternative power systems — including gas turbines and diesel electric arrangements — although diesel engines are, and will, continue to be the prime mover of ships for some time to come. The proliferation of very large cruise ships, and larger ships in general, have demanded that engineers and suppliers provide more quantities of and more reliable electric power.

Shipboard communications advances have perhaps most closely mirrored advances found in the consumer sector, i.e. there have been, and will, continue to be quantum leaps forward in the ability to quickly, safely and more cost-effectively transfer increasingly large amounts of data, as well as voice, fax and other traffic from ship to shore and vice versa. 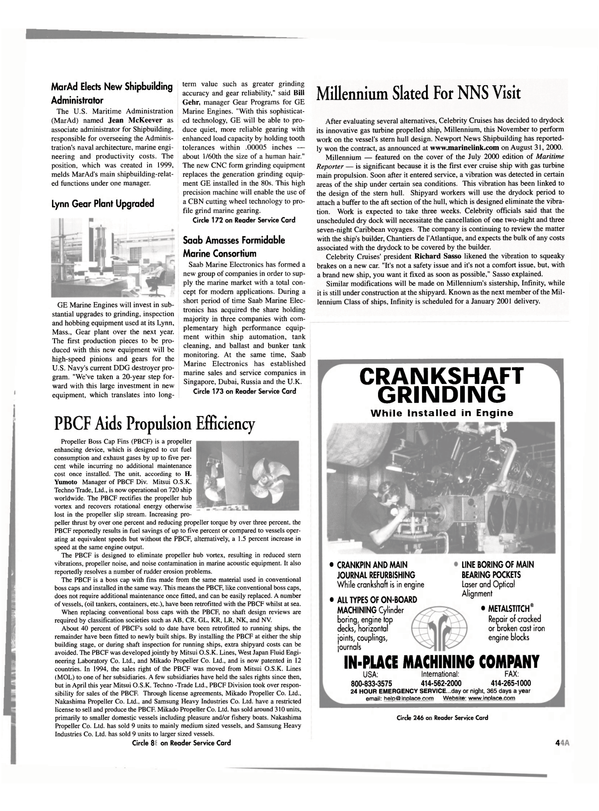